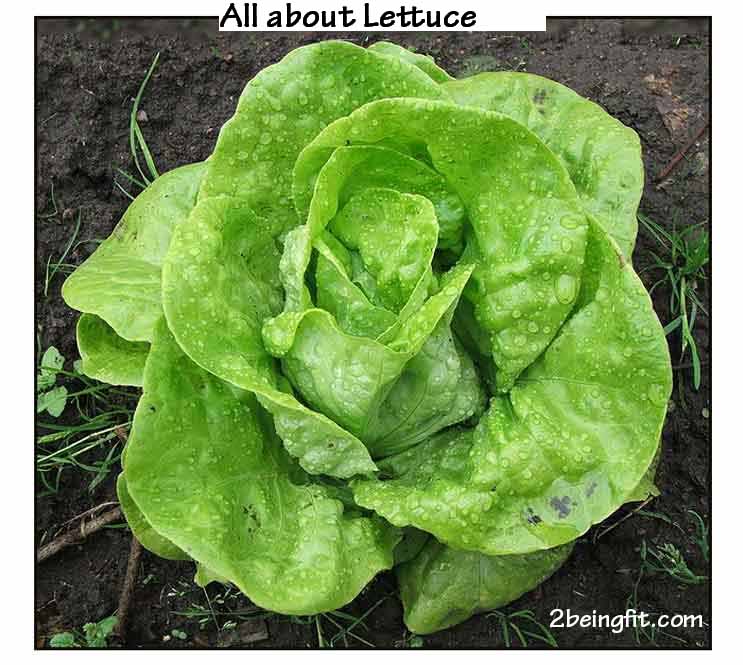 The scientific name of the lettuce is Lactuca sativa Linn. It is also known as Garden lettuce.

Lettuce is an erect, usually simple, annual, smooth, very leafy herb reaching a height of 1 meter when in flower. Leaves are stalkless, obovate to oblong-obovate, 6 to 20 centimeters long, entire or lobed, toothed, thin, and numerous at the base. Heads are numerous, about 1 centimeter long, and borne in open panicles; the branches, often much reduced, bear bractlike leaves. Flowers are yellow. Involucral bracts are ovate, the inner ones linear. Achenes are brown, with a very slender beak about as long as the body.

– The whole plant yields a volatile oil, vitamin A, and a trace of hyoscyamine.

– Lacturacium or lettuce opium, mentioned in the old pharmacopoeias, is the milky juice of the plant.

– Phytochemical study of a methanol extract have yielded triterpenoids, saponins, and simple phenols.

The ancients considered it an aphrodisiac.

Seeds are aromatic and bitter.

– Early leaves, eaten as salad, are easily digested, but yields a poor amount of nutritive matter.

– Flowering plant produces, in feeble degree, the effects of lacturacium.

– Juice used as substitute for opium.

– Extract from fresh plant is a mild sedative; also, useful in the treatment of coughs in phthisis, bronchitis, asthma, and pertusis.

– In ancient folk medicine, used as appetite stimulant and aid to sleep.

– Infusion of seeds given in fevers, especially typhoid.

– Seeds also given for excessive thirst and to provide a sensation of heat in the stomach.

– Decoction of seeds used as demulcent; also as sedative and for treatment of insomnia.

– Believed to relax the genitalia and diminish spermatic secretion.

– Seeds, boiled or made into confection, useful for chronic bronchitis.

– In Iran, seeds are use for relieving inflammation and osteodynia.

Study of crude methanol/petroleum ether extract of seeds showed time- and dose-dependent analgesic effect in formalin test and a dose-dependent anti-inflammatory activity in a carrageenan model of inflammation.

Study showed L. sativa protected neurons from accumulation of lipofuscin granules, proving itself an effective antioxidant. (Lipofuscin or age pigment is a yellowish-brown autofluorescent, protein and lipid containing pigment that accumulates in the lysosomes of a variety of post mitotic cells including neurons and cardiac myocytes during ageing.) Results showed L. sativa protects against D galactose-induced oxidative stress and reduces accumulation of lipofuscin granules.

Study of methanolic extract of leaf showed significant antioxidant potential both in vitro and in vivo.

Study of lettuce extracts showed higher flavonol contents in open-air samples than the greenhouse ones.

Study showed a remarkable nociceptive effect. An opioid pathway is a possible mechanism.

Study evaluated whether storage under modified-atmosphere packaging affected the antioxidant properties of fresh lettuce. Results showed no changes after ingestion of MAP-stored lettuce in all markers. MAP-stored lettuce did not modify plasma redox status in healthy subjects.

• Case of Hypersensitivity to Lettuce:

Study evaluated the sleep-prolonging effect of the plant in mice. Results showed lettuce potentiates pentobarbital hypnosis without major toxic effect. The responsible component is most likely non-polar agent)s) found in the n-butanol fraction.

• Safety and Effect of Seed Oil in Sleep Disorders:

Study evaluated capsules of L. sativa seed oil in 60 patients suffering from insomnia. Improvements in the modified State-Trait Anxiety Inventory and Sleep rating scale scores were significantly greater in patients receiving seed oil. No side effects were attributable to the seed oil at the test dosage.

A water extract of lettuce Lactuca sativa inhibited the growth of HL-60 leukaemic cells and MCF-7 breast cancer cells, correlating with the activation of Chk2, the induction of tumour suppressor p21, and the severe downregulation of the proto-oncogene cyclin D1. The ethyl acetate extract induced HL-60 cell death, correlating with the acetylation of α-tubulin.