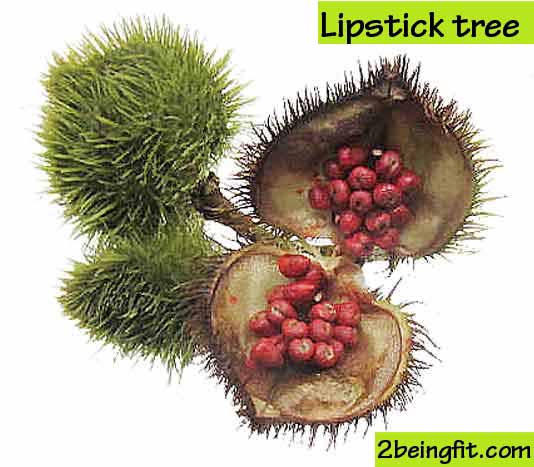 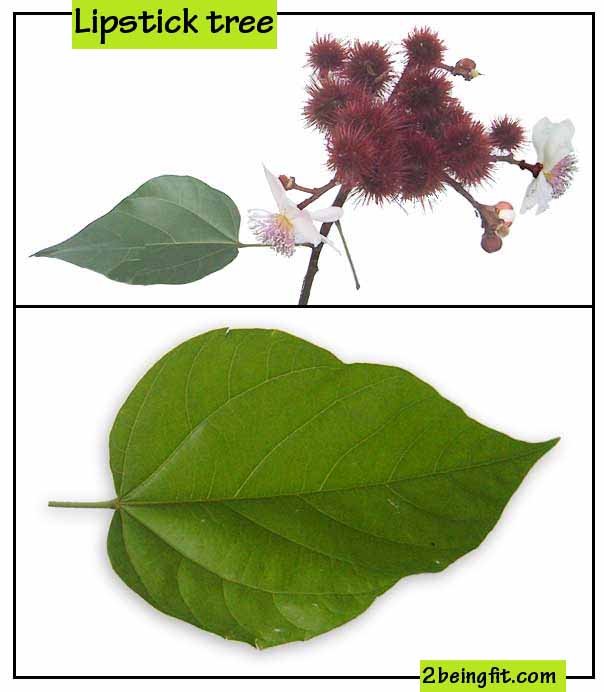 The scientific name of the lipstick plant is Bixa orellana Linn.

Next to caramel, annatto is the world’s most important natural colorant yielding yellow to red colors. There is global commercial production of the seed, estimated in 1990 at 10,000 tons per year; Brazil being the largest exported. 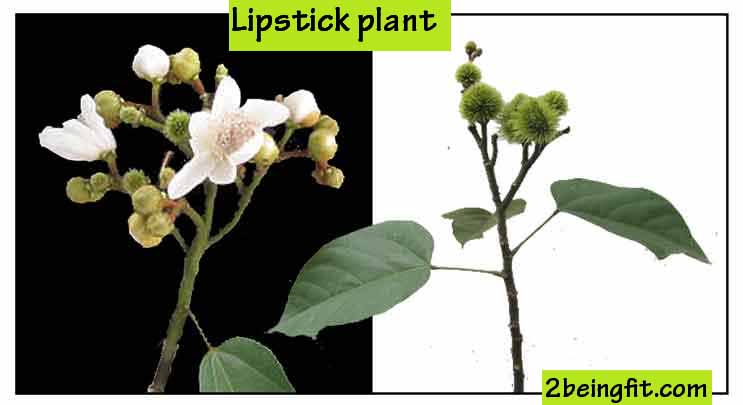 – Planted in and about towns throughout the world.

– Widely cultivated and naturalized in tropical and subtropical regions throughout the rest of the world.

– Bixa orellana seeds are the only natural source of bixin, a carotenoid widely used in food industry as colorant.

– Seed contains a fatty oil with palmitin, a little stearin, and phytosterol.

– Phytochemical analysis of seeds showed phenolic compounds and flavonoids to be present in all extracts. The maximum amount of phenolic compounds was found in the aqueous extract with 75.3 mg of GAE/g of extractive. Isolation of purified bixin was done from the seeds. (see study below) (39)

– Root-bark is antiperiodic and antipyretic.

– Fine powder covering the seed is hemostatic and stomachic.

– The pulp (annatto) surrounding the seeds is astringent and slightly purgative.

· For small burns: Wash the leaves with soap and water. Boil 10 leaves in 5 glasses of water; cool. Soak the burn area for 10 minutes, once a day.

· The pulp of the seeds, immediately applied to, prevents blistering and scarring. Pulp also used to treat bleeding, dysentery, gonorrhea, constipation and fever.

· The seeds, ground and boiled, also used for burns. Mixed with coconut, is applied to the throat.

· Fresh seeds when moistened produce a reddish colored juice that is applied to red rashes.

· The seeds are used as antidote for cassava and J. urcas poisoning.

· Fine powder that covers the seeds is used as hemostatic, and internally as stomachic.

· In French Guiana, infusion of leaves used as purgative in dysentery.

· Leaves used as febrifuge in Cambodia.

· Decoction of leaves used as gargle for sore throat.

· The achuete dye used with lime for the treatment of erysipelas.

· The leaf, bruised with the head of a “walis-tingting” (broom made from frond ribs of the coconut leaves), mixed with warm coconut oil is applied on the forehead for headaches.

· An infusion of the leaves used as purgative.

· Poultice of leaves are diuretic and used for treatment of gonorrhea

· Mucilage produced from infusion of fresh branches used a emollient in the Antilles..

· Extract of leaves, barks and roots used as antidote for poisoning from Manihot esculenta, J. curcas, and Hura crepitans.

· Decoction of leaves for nausea and vomiting.

• In traditional Peruvian medicine, used to treat heartburn and stomach distress caused by spicy foods; also, as a vaginal antiseptic and cicatrizant.

· In Uruguay seeds are ground and boiled and used on burns.

• In Guatemala used for treatment of gonorrhea.

• Used as female aphrodisiac in the Amazonia.

The main product from B. orellana is an organic dye present in the seed coat called “annatto,” lipid-soluble and widely used in the food industry for its red to orange-yellow colours (cheese, butter, oils, margarine, ice-cream, pastries). Next to caramel, it is the world’s second most important food colorant. Besides providing an attractive color to meat and other dishes, it also imparts a subtle and distinctive flavour. In the cosmetic industry it finds use in hair, nail and soap products, and also in the many of the household products – floor wax, shoe polish, russet leather, wood stains. [also see study below (40)]

Lightweight, not durable. The fibrous bark used to make ropes and twine.

Scientific studies on benefits and uses of lipstick plant

Study of organic extract of BO showed to possess a narrow spectrum of antimicrobial activity, effective only against Gram+ bacteria used in the study.

Preliminary pharmacologic studies on the methanol extracts of BO leaves showed statistical decrease in locomotor activity, anticonvulsant effect, analgesic and antidiarrheal effect and a delay i gastrointestinal motility. It also showed radical scavenging properties and antibacterial activity against agents of diarrhea and dysentery.

Study of BO oil seed suspension of the red seed coat showed it to be a potent hypoglycemic agent. Extract study showed hypoglycemia in both normal and streptozotocin diabetic dogs.

Study showed B orellana seeds can be used as a pigment in making milk-based paint. (9)

In a study of 46 plants popularly used in Guatemala for the treatment of gonorrhea, B orellana bark was one of the most active plants that inhibited strains of freshly isolated N gonorrhea. (11)

Study of hot water extracts of B orellana, C morifolim and I batatas showed potent inhibitory activity towards lens aldose reductase. Phytochemicals yielded isoscutellarein from B orellana as its potent inhibitor.

Prospective double-blind randomized placebo-controlled study in patients with BPH presenting with moderate lower urinary tract symptoms (LUTS) associated with BPH did not show any benefit from BO compared to placebo. (16)

Study evaluated the radioprotective effect of a hydroalcoholic extract of seeds of B. orellana on chromosome aberration in cells of bone marrow in irradiated mice. Pretreatment resulted in significant reduction in aberrant metaphases. Results suggest B. orellana may be used as radioprotective in humans. (19)

Bixa orellana seeds are the only natural source of bixin, a carotenoid colourant. Microwave assisted extraction was shown to be the most effective extraction procedure for isolation of bixin. MAE is green technology, superior to conventional extraction methods. (21)

Study evaluated the cardioprotective activity of an ethanol extract against isoproterenol-induced myocardial infarction in Swiss albino rats. A dose-dependent protective effect was observed. All parameters and markers were significantly reversed upon treatment with the extract and were comparable to a-tocopherol, together with histopath changes. (25)

Study showed pretreatment with aqueous extract of B. orellano caused significant dose-dependent inhibitory activity against inflammatory models, the bradyknin-induced hind paw edema model and bradikinin-induced increased peritoneal vascular permeability.. The anti-inflammatory effect may be due to its antibradykinin activity related to a reduction of nitrous oxide production. (28)

Study evaluated the major constituents of an aqueous extract of B. orellana and its antihistamine activity on acute inflammation-induced model in rats. Results showed anti-inflammatory activity attributed to the inhibitory effect on vascular permeability, suppressed as a result of reduced expression of biochemical mediators (NO and VEGF) in tissues. (see constituents above) (32)

Study evaluated the wound healing activity of BO leaf extract in an excision wound healing model on guinea pigs. showed only slight decrease in wound area, not significantly different from the control group. The findings do not support or justify its use in folkloric medicine for wound healing. (33)

A 6-month study in humans given 750 mg of leaf powder per day showed no significant or serious adverse effects. Leaf extracts appear safe when given under the current conditions of use. Additional human and animal controlled and efficacy studies are needed. (36)

Study evaluated antimicrobial and antifungal activities of phenolic leaf extracts of Bixa orellana, L. camara, S. jamaicensis. and H. suaveolens against 4 bacterial strains (S. aureus, B. subtilis, E. coli and P. fluorescence) and 3 fungi (A. niger, A. flavus, and Mucor sp.). The phenolic extracts of all four plants showed antibacterial and antifungal activity with varying degrees of inhibition. The phenolic components were equivalent to Triclosa in antibacterial activity. (38)

Study reports on the extraction of color from Bixa orellana seeds and its application in dyeing and finishing of leather. Results showed the natural dye with better coloring properties. (40)

Study analyzed the bioactive component of a petroleum ether extract of B. orellana seed and its anticancer potential against B16F-10 melanoma cell line. Results showed dose- and time-dependent cytotoxicity with IC50 values of 145.98 ± 7.49 µg/ml and 121.60 ± 6.20 µg/ml for 24 h and 48 h, respectively. The extract prevented the cell proliferation and migration of treated cancer cell. GC-MS analysis yielded three anticancer compounds viz. geranyl geraniol, squalene, and beta-sitosterol. Results showed potent anticancer and apoptotic inductive potential which can be further explored in in vivo model for possible cytotoxic activity. (41)

Study evaluated the feasibility of annatto seeds (Bixa orellana) and kasubha (Corcus sativus) together with cartridge ink as an alternative indelible ink. Results showed the ink set up that contains 30% cartridge ink, 30% kasubha extract, and 40% atsuete extract was the most effective and has a potential as alternative for indelible ink. (44)

Study evaluated the oil extract of B. orellana as a healing agent in the rat model of open wound healing. Results showed B. orellana oil will hasten the onset of the healing process and its initial phases, but will ultimately produce a scar of poorer quality. (also see 33) (46)

Study of B. orellana through hairy root culture technology yielded secondary metabolites. Compounds 1-10 were evaluated for antimalarial properties. Compound 5 (stigmasterol) was the most potent lead compound. Stigmasterol and the other chemical constituents of hairy roots showed modest antimalarial properties in 3D7 and K1 strains with low toxicity in mammalian cells. (47)

– Small scale local cultivation for condiment and food colorant use.

– Worldwide production of annatto seeds for commercial and home use.