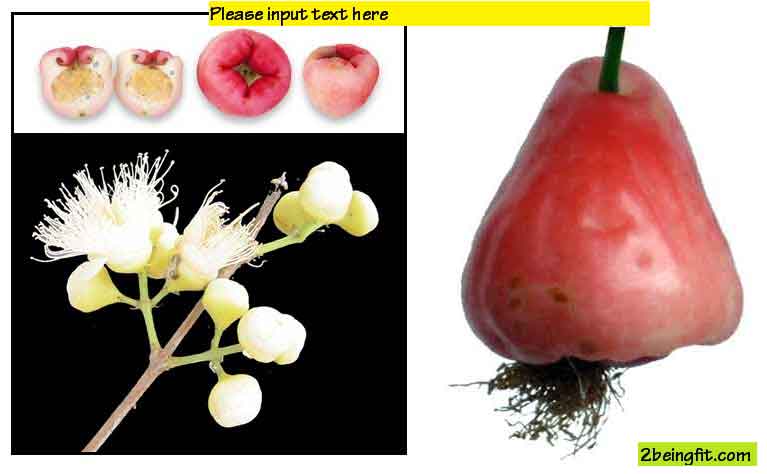 The scientific name of the Malay apple is Syzygium malaccense. It is also known as Makopa, Tersana rose apple, Mountain apple, and Water apple.

Malay apple is a tree reaching a height of 10 meters. Leaves are pinkish when young. Older leaves are large, drooping, elliptic-oblong to broadly oblong-lanceolate, 15 to 30 centimeters long, 7 to 15 centimeters wide, narrowed and pointed at both ends. Flowers are large, showy, crimson, 5 to 6 centimeters in diameter, borne on the branches below the leaves, clustered on short, few-flowered racemes, 6 centimeters long or less. Fruit is shiny, oblong or pear-shaped, 5 to 7.5 centimeters long, either white splashed, striped with pink, or wholly crimson to purplish, and slightly shiny, seedless or one-seeded. Flesh is white, pithy, juicy. Although rather tasteless, some varieties have a pleasant flavor. – Fruit is eaten raw but may be prepared with flavoring.

– In Puerto Rico, used for making of table wines.

– In the Moluccas, the astringent bark is used for making a mouthwash for thrush (dapulak).

– A root-bark decoction used for dysentery and amenorrhea.

– For sore throat, the inner bark is scraped or the whole bark is decocted.

– Root-bark used as abortifacient; also for amenorrhea and dysentery.

– In Hawaii, juice of salted pounded bark used for wounds.

– In Molucca, decoction of bark used for thrush.

– In Cambodia, decoction of fruit, leaves and seeds used for fever. Juice of leaves used for baths and lotions. The root is considered diuretic.

– Timber: Wood is used for construction, bowls and boards.

Flavan-3-ols isolated from some medicinal plants inhibiting COX-1 and COX-2 catalyzed prostaglandin biosynthesis: S malaccense was one of four plants tested that were traditionally used for inflammatory conditions.

Study of 58 underutilized Malaysian fruits of 32 different species, showed fruits from some genera, including Syzygium, had higher antioxidant capacity compared to other genera.

Study of hydrodistilled essential oil from the fresh leaves of SM grown in Nigeria showed the oil to be largely composed of monoterpenes (61.1%) characterized mainly by a-pinene, b-pinene, p-cymene and a-terpineol. The sesquiterpenes constituted 30.8% of the oil with b-caryophyllene as the major component.

Preliminary ichthyotoxic test on all parts of SM showed the leaves fraction to be most ichthyotoxic against tilapia fish (Tilapia oreochromis). Study isolated three compounds – ursolic acid, B-sitosterol, and sitos-4-en-3-one. None of the compounds gave any significant ichthyotoxicity.

Cataractogenesis is a common complication in diabetes, and aldose reductase in a lens enzyme involved in its development. In a study, S malaccense was one of the best four plant extract inhibitors with a preventive effect on cataract formation.

Study of SM aqueous and alcoholic bark extracts in STZ-induced diabetic rats showed reduction of blood sugar and improvement in hyperlipidemia and liver glycogen depletion. The alcohol extract was more effective than the aqueous extract and equivalent to that of glibenclamide.

Study was done to develop pomera (S. malaccense), an underutilized highly perishable fruit, into a candied fruit product. Results showed the color, taste, and texture of the candied fruit to be acceptable.

Study evaluated the subacute effects of extract of S. malaccense in albino rats in doses of 50, 100, 250, 500 mg/kbw for 28 days.. Results showed a tendency to affect the hematopoeitic elements and alter the structural integrity of the liver tissue if ingested at higher doses.

Study evaluated the use of the plant in hypermotility states of the gut. A hexane extract was found to dose-dependently relax the spontaneously contracting isolated rabbit jejunum. Four flavonoids isolated from the hexane extract showed dose dependent spasmolytic activity with SS2 showed the most potency. These compounds exhibiting spasmolytic and calcium antagonist activity may be responsible for the medicinal use of the plant in diarrhea.

Study evaluated the anti-inflammatory activities of methanol extracts of Syzygium malaccense fruits on lipopolysaccharide (LPS)-stimulated RAW 264.7 macrophages. The methanol extract did not show any anti-inflammatory activity. The author suggests the testing of other extracts as bioactive compounds could be extracted from different solvent systems.

Cultivated.
Tinctures in the market.