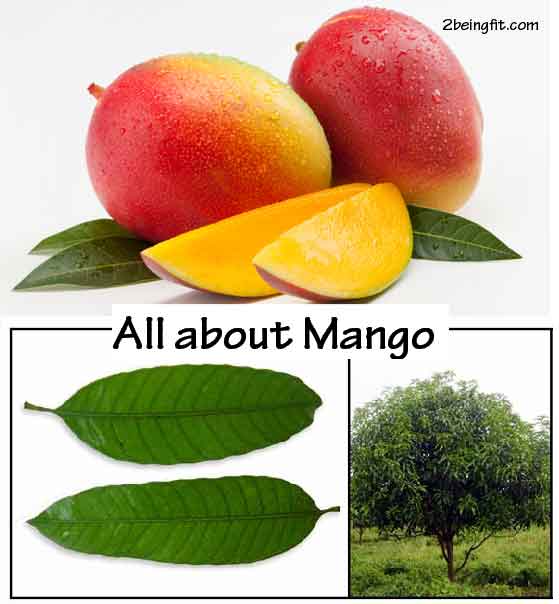 The scientific name of mango is Mangifera indica Linn. Other names incude

Mango is a large tree, with a dense and spreading crown. Leaves are oblong to oblong-lanceolate, 10 to 30 centimeters long. The flowers are yellow, small, 3 to 4 millimeters long, borne on erect and hairy panicles, which as as often as long as the leaves. The fruit is a drupe, of varying shades of yellow, fleshy, oblong-ovoid,10 to 15 centimeters long, and slightly compressed, the skin is thin, and in the center is a large flattened, fibrous seed, and when ripe, surrounded by an edible yellow pulp.

It is a widely cultivated tree for its fruit. It has several varieties in cultivation in all tropical countries. – The bark exudate yields a resin, gum, ash, and tannin.

– Good source of iron (deficient in calcium); excellent source of vitamins A, B, and C.

– Food: As fruit or mango-ade. Makes a delicious ice cream. Slice and served with cream and sugar, taste has slightly similarity to peaches. Mangoes are canned with syrup, dried and candied, jammed. Unripe mangoes are chutneyed, or pickled in brine.

– In the Philippines, decoction of root is considered diuretic.

– Bark and seeds are astringent. In Cambodia, used in hot lotions for rheumatism and leucorrhea.

– In India and Cambodia, solution of the gum from the bark is swallowed for dysentery.

– Resin is used for aphthous stomatitis.

– Diarrhea: Take decoction of bark or kernel as tea.

– Fluid extract, or infusion, used in menorrhagia, leucorrhea, hemorrhoidal bleeding, and hemorrhage from the lungs, nasal catarrh, and for lumbrici.

– Gum resin from the bark and fruit is used as sudorific; also as antisyphilitic.

– Root bark is a bitter aromatic, and in Sind, used for diarrhea and leucorrhea.

– Decoction of leaves with a little honey used for loss of voice.

– Gum resin from bark, mixed with coconut oil, used for scabies and other parasitic skin diseases.

– Juice of leaves used for dysentery.

– Tea of leaves with a little honey used for hoarseness and aphonia, 4 glasses daily.

– Ashes of burned leaves used for scalds and burns.

– Infusion of young leaves used in asthma and cough.

– Juice of peel of unripe mangoes used for skin diseases.

– Seed is vermifuge and astringent.

– Seed is considered astringent, vermifuge; given in obstinate diarrhea and for bleeding piles.

– Kernel or stone from the green mango considered an anthelmintic.

– For asthma, bleeding piles, chronic dysentery, hematemesis, menorrhagia, leucorrhea, and round worms, powdered seed is given, with or without honey.

– In Indian traditional medicine, seeds used for vomiting, dysentery, diarrhea. Paste is made from seed, honey and camphor and applied over the vagina to make the vagina contracted and firm.

Results of the study support the folkloric use of the plant for painful arthritic and other inflammatory conditions, as well as T2DM.

Mangifera indica stem bark effect on the rat trachea contracted by acetylcholine and histamine: Study showed MI blockage of histaminic and muscarinic receptors, supporting the traditional use of MI stem back in the treatment of asthma.

Flavonoids from M indica effectively reduce lipid levels in serum and tissues of rats with induced-hyperlipidemia. Degradation and elimination of cholesterol were enhanced.

Study of the methanolic and aqueous extracts of seeds of M indica showed significant anti-diarrhea activity, the effect partly attributed to the effect on intestinal transit.

Mangiferin is a major C-glucosylxanthone from the stem bark, leaves, heartwood, roots and fruits of M indica and has been reported to have a variety of pharmacologic activities including antioxidant, radioprotective, antitumor, immunomodulatory, anti-allergic, anti-inflammatory, antidiabetic, antibacterial, among others, supporting the numerous traditional uses of the plant.
• Polyphenols / Antiulcerogenic Activity:

Bioactive studies of Mangifera indica against bacterial isolated from urine samples showed the aqueous and ethanolic seed kernel extract good antibacterial activity against E coli, S aureus and S pyogenes. The antibacterial activity may be due to specific phytochemical components. Toxic components were not detected in the seed kernel and also appear to be a safe source of antioxidants.

The insulinotropic hormone, glucagon-like peptide 1 (GLP-1), a recent addition to diabetes therapy, is metabolized by dipeptidyl peptidase IV, and inhibition of DDP IV enhance GLP-1 which improved insulin secretion and glucose tolerance. Study on the methanolic extract of Mangifera indica leaves show the inhibitory effect on DPPIV and present a potential novel approach to diabetes therapy.

Study of stem-bark aqueous extract (MSBE), by oral or dermal administration, showed no lethality at the limit doses, with no adverse effects. it was non-irritating on skin, ocular, or rectal mucosa. It also had minimal irritancy following vaginal application.

Study evaluated an ethanolic extract of fruit on cognitive performances in step down passive avoidance task and elevated plus maze task in mice. Treatment reversed the aging and scopolamine-induced memory deficits. Results showed effects that are memory-enhancing in nature.

Study showed aqueous extract of mango leaves to be rich in total phenols and total flavonoids, and as powerful antioxidants should be used in manufacture processes of the natural products as function foods or as dietary supplement with antidiabetic activity and hypoglycemic effect.

Study evaluated the potential anticancer effects of an ethanolic kernel extract on breast cancer cell (MDA-MB-231 and MCF-7). Results showed the extract to be more cytotoxic to both estrogen positive and negative breast cancer cell lines than to normal breast cells.

Study evaluated the antihyperglycemic activity of ethanolic extract of leaves in alloxan induced diabetic rats. Results showed decreased alloxan effect and improvement in the laboratory parameters, suggesting a potential benefit for the treatment of diabetes mellitus.

The insulinotropic hormone, glucagon-like peptide 1 (GLP-1), a recent treatment for type 2 diabetes, is metabolized by DDP-IV (dipeptidyl peptidase IV). Inhibitors of DPP-IV enhance the level of GLP-1, which improve glucose tolerance and increase insulin secretion. Study showed a methanolic leaf extract to have potent in-vitro DPP-IV inhibitory activity, and may present a novel addition to the treatment of diabetes.