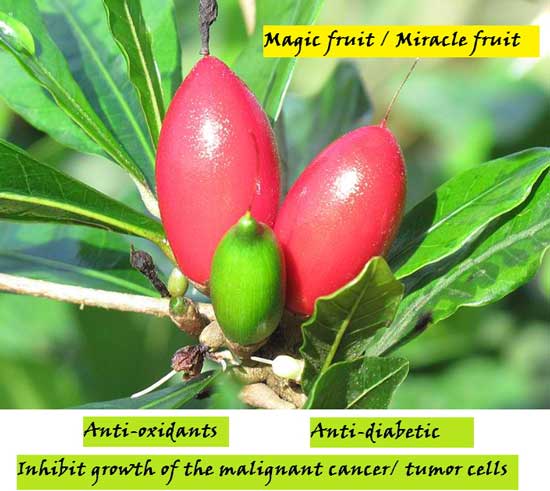 It is a shrub that grows up to 10 feet. Fruit is orange colored containing one seed. Seeds are the size coffee beans. It is native to West Africa but introduced in many other regions.

Because miraculin is denatured by heating, the pulp must be preserved without heating. Freeze-dried pulp is available in granules or in tablets, and has a shelf life of 10 to 18 months.

-The shelf life of the fresh fruit is only 2–3 days. – It has the unique property of making acidic and bitter fruits taste sweet. When held in the tongue, strong sweetness is sensed for over 1 hour each time a sour solution is tasted. This property is attributed to miraculin.
– Studies have suggested antidiabetic, antioxidant, and antiproliferative ( prevent or retard the spread of cells, especially malignant cells- tumor/ cancer) properties.

In Japan,it is popular among patients with diabetes and dieters.

It is often referred as  “Psychedelic” berry, which contains a non-narcotic ingredient in social soirees referred to as “flavor tripping” parties.

Positive allostric modulators of human sweet taste have been developed as a new way of reducing dietary sugar intake. Study showed the sweet taste enhancers work at the molecular level, with a similar mechanism as the natural umami taste enhancer molecules. Whereas sweeteners bind to the hinge region and induce closure of the Venus flytrap domain of T1R2, the enhancers bind close to the opening and further stabilize the close and active conformation of the receptor.

A pilot study of the S. dulcificum fruit in 8 patients with cancer evaluated if consumption of the miracle fruit could improve chemotherapy-associated taste changes. All participants reported positive taste changes with the supplement.

Pilot study showed miracle fruit is safe for use in patients undergoing chemotherapy. Of 23 patients analyzed, 7 (23%) had improvement in taste, 8 (35%) believed it was helpful; when considering stabilization of taste, 52% responded positively.

A preliminary study showed improvement in 70 % of participants complaining of metallic taste associated with chemotherapy.

• Effect of Pulp on Biochemical Parameters

Study of methanol extract of pulp showed no negative effect on some biochemical parameters in albino rats. No toxicity was seen up to 5,000 mg/kg. There was reduction in total serum cholesterol and LDL, with an increase in HDL concentration. A glucose lowering effect was attributed to modifications in glucose uptake in the intestine.

• Antioxidant / Phenolics and Flavonoids in Skin, Pulp, and Seeds

Study showed the free phenolic content in the skin was 3 times that of the pulp and 4 times that in seeds. Antioxidant activities in skin and pulp were comparable, and significantly higher in seeds.

Substitute “sugar” or any other sweetener agent with this natural magic berry in all of your recipes- desserts, lemonade, syrup, jam, preserves, sauce, juice, tea, drinks, smoothies, ice cream etc.