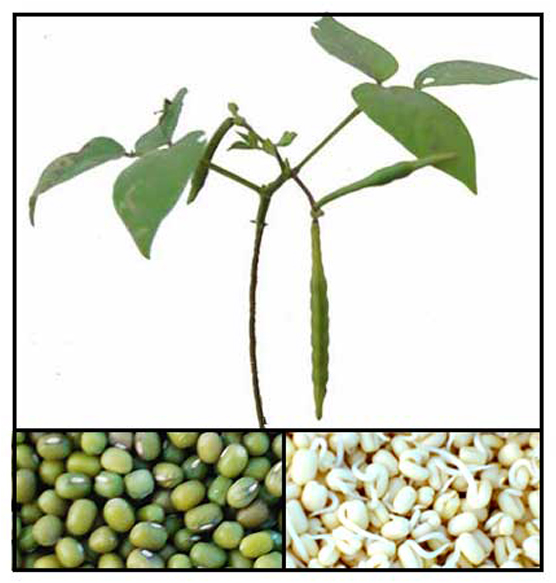 Mung bean is an erect, annual herb branching at the base, more or less clothed with spreading, brownish hairs. Leaves are long-petioled, compound, with three leaflets which are ovate and entire, broad based with pointed tips, 8 to 15 centimeters long, the lateral ones being inequilateral. Flowers are yellow, about 1 centimeter long, arranged near the end of the short stalks. Pods are linear, hairy, spreading, 6 to 8 centimeters long, about 6 millimeters wide, and covered with scattered, long, brownish hairs. Seeds are 4 to 6 millimeters in length.

– Not a native of the Archipelago.

– Also occurs in India to China and Malaya, in cultivation.

– Sprouts are a good source of vitamin B.

Extensively used in Philippine cuisine, in salads or boiled, in soups or stews.

In Chinese cooking, bean sprouts is considered a yin or cooling food.

– In the Philippines decoction of seeds used as diuretic in cases of beriberi.

– The seeds, boiled or raw, used in maturative poultices.

– Mongo extract used for its protective and curative effects in polyneuritis galinarum.

– Roots considered narcotic, used by the Santals for bone pains.

– In India, seeds used internally and externally for paralysis, rheumatism and a variety of nervous system ailments.

– Seed considered hot and tonic, used for coughs, hemorrhoids and affections of the liver.

– In large quantities, used as aperient.

– Poultice useful for checking the secretion of milk and reducing distention of the mammary glands.

– Powdered beans rubbed into scarifications over tumors and abscesses to promote suppuration.

– In Indo-China seeds used as antiscorbutic and diuretic.

Scientific studies on benefits and uses of mung beans

The study showed all the extracts were hypotensive and contained bioactive proteinaceous substances and stimulated urine flow. Combinations of the extracts showed subtractive or additive effects.

Clinical studies on the anti-irritation effects of mung bean (Phaseolus aureus) extract in cosmetics: The study of extracts applied to irritant-containing cosmetic formulations showed considerable anti-irritation efficacy and suggesting a potential use for cosmetic products.

Previous studies have shown the hypotensive effect of green beans, common rue and kelp. In this study, green beans and kelp showed negative chronotropic effects, while rue showed positive chronotropic and inotropic effects. A combination of all three showed subtractive effects on the decrease of atrial rate. The three plants interacted to modify their various cardiovascular effects.

•  Mung beans helps in  treatment of high levels of fats (lipids), such as cholesterol, in the blood (hyperlipidemia) /Hypolipidemic / mung beans are good for diabetic patients/ Antiatherogenic:

Ethanolic extract isolated vitexin and isovitexin, previously suspected of antioxidant and anti-inflammatory activities. Study confirmed anti-irritation effects and suggests that the mung bean extract could be applied to cosmetic products.