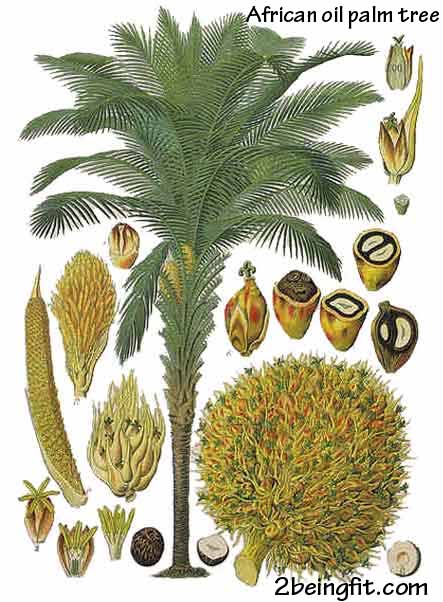 The  scientific name of the oil palm tree is Elaeis guineensis Jacq.

Oil palm tree has an erect trunk reaching a height of 4 to 10 meters. Leaves are numerous, 3 to 4.5 meters long. Petioles are broad, armed on the sides with spinescent, reduced leaves. Leaflets are numerous, linear-lanceolate, nearly 1 meter long, 2 to 4 centimeters wide. Male inflorescence is dense, having numerous, cylindric spikes which are 7 to 12 centimeters long and about 1 centimeter in diameter; the rachises excurrent as a stout awn. Female inflorescence is dense, branched, 20 to 30 centimeters long, the flowers densely disposed. Fruit is borne in large dense masses.

– Introduced sometime in the middle of 19th century.

– Seeds of improved strain introduced by Dr. Eduardo Quisumbing in 1938 from Kuala Lumpur.

– Grown extensively in West Africa, its original home, and in Malaya, Sumatra, Java, India, and the United States.

– Palm oil consists principally of palmitin and olein, used primarily in the manufacture of soaps and candles.

– The palm kernel oil consists chiefly of glyceride of lauric acid, together with palmitic, oleic and myristic acids, some caprylic acid, capric acid and phytosterin, and used for making vegetable butter. 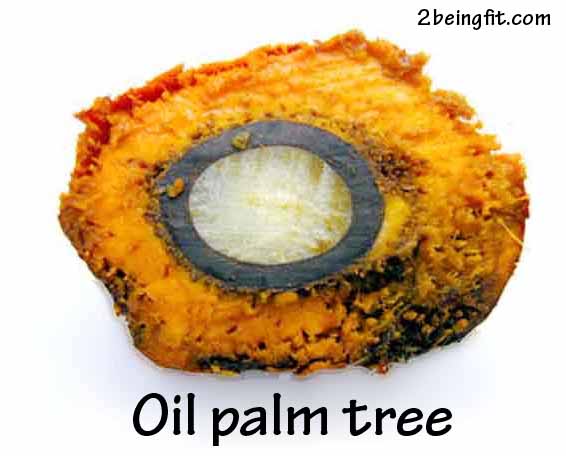 – Sap from inflorescence used to make wine and sugar.

– In Guinea, oil is applied to wounds as a vulnerary.

– Used as a liniment for rheumatism.

– Decoction of root or burnt powder of root taken orally to treat epilepsy.

– Infructesence mixed with ginger burned and applied as enema to young children to encourage walking at an early age.

– The Bubis of the Island of Fernando Po make a poultice made from oil which is applied to wounds.

– In Equatorial West African, roots used as diuretic and fresh sap as laxative.

– In South Eastern Nigeria, used for treatment of various diseases and skin infections.

– Oil: Palm oil chiefly used in the manufacture of soaps and candles. The palm-kernel oil is used for making vegetable butter.

– Wine: In Aftrica, wine made from the trees.

• It has a high oil yield (7,259 liters per hectare per year), high levels of natural antioxidant, and comparatively cheaper pricing.

• It has more saturated fats than canola, corn linseed, soybean, safflower and sunflower oils and can withstand deep-fry heat, with a resistance to oxidation.

Supplementation of palm oil as an antioxidant to a certain extent reduced lipid oxidation in healthy rats; but worsened or not significantly inhibited in diabetic rats.

Study evaluated the hepatoprotective activity of E. guineensis against paracetamol- induced liver injury in mice through serum analysis. Mice treated with leaf extract showed significant decline in ALT, AST, and bilirubin levels. The hepatoprotection was attributed to an antioxidant activity.

Study evaluated the cytotoxic effects of a methanol extract on MCF-7 and Vero cell. Results showed significant cytotoxic effects on MCF-7, suggesting a potential use of the extract in preparing recipes for cancer-related ailments.

Results of study of oil palm leaf extract (OPLE) showed improvement in renal dysfunction and pathology in diabetes. Renoprotection was via catechin-rich OPLE modulation of oxidative stress caused by hyperglycemic-induced generation of free radicals in the diabetic kidney and prevention of renal dysfunction and structural injury.

Study evaluated the acute toxicity of a caechin-rich oil palm (E. guineensis) leaf extract. No observed adverse effects were seen at 2 gm dose. There was no death even at 5 g dose, and the acute toxic injuries appeared reversible.

Study evaluated the antioxidant and pro-oxidant effects of chronically administered high doses (1000 mg kg) of leaf extract in an animal model of diabetic nephropathy. Results showed chronic administration for four weeks attenuated renal dsyfunction and development of glomerulosclerosis and tubulointerstitial fibrosis, features that are associated with DN. Suppression of increases in oxidative stress markers and fibrotic cytokine was observed. In contrast, OPLE adminstered for 12 weeks caused worsening of renal dysfunction, accompanied by an increase expression of one of the NADPH oxidase subunits p22phcx. Results suggest the unfavorable effects of prolonged treatment with 1000 mf/kg were accompanied by increase expression of one of the NADPH oxidase subnits.

Pellets, tinctures, dilutions in the cybermarkets.