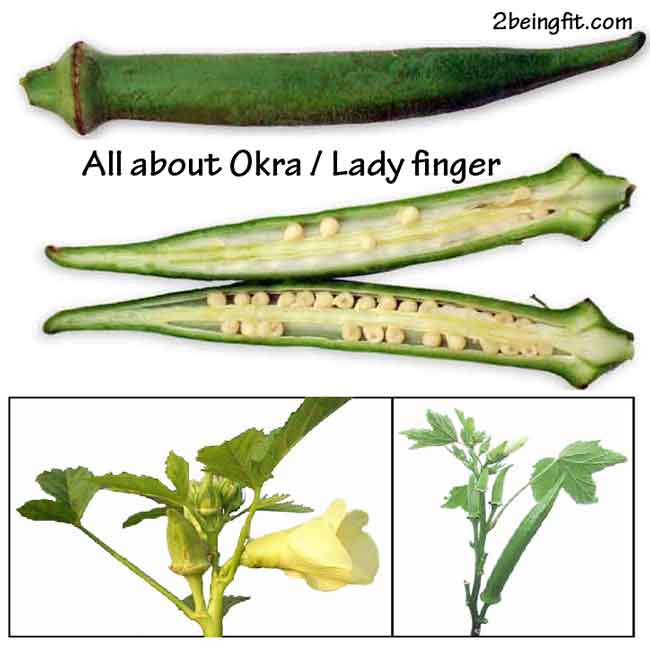 The scientific  name of the okra is Abelmoschus esculentus (Linn.) Moench. It is also known as Lady’s fingers, and Gumbo.

Okra is a coarse, erect, branched, more or less hairy, annual herb, 0.6 to 1.5 meters high. Leaves are long-petioled, orbicular or orbicular-ovate, about 25 centimeters long or less; with a heart-shaped base; the margins, 3- to 5-lobed. Petioles are equal to the blade in length or longer. Flowers are axillary and solitary; corolla, large and yellow, and inside, deep purple at the base. Fruit is elongated, 10 to 25 centimeters long, 1.5 to 3 centimeters in diameter, tapering to a blunt point and containing rows of rounded, kidney shaped seeds.

– Distillation of leaves with water yield an essential oil, which in time solidifies as a crystalline camphor allied to menthol and called ‘Basil-camphor.

– Whole plant is aromatic, with an odor resembling cloves.

– Mucilage considered to have an aphrodisiac effect.

· Prepared in a variety of ways; an ingredient of soups and stews.

· Fair source of iron, vitamin A and C; good source of calcium.

· Decoction of roots and leaves as a tea or for washing.

· Infusion of roots used for syphilis.

· Poultice of roots and leaves for wound healing.

· Decoctions of leaves for abdominal pain.

· Decoction of immature fruit used as demulcent and emollient poultice.

· Decoction of leaves and flowers used for treatment of bronchitis and pneumonia.

· Mucilage prepared from roots and leaves used for gonorrhea.

· Fruit used as demulcent in gonorrhea and dysuria.

· In Turkey, leaves used in preparation of medicine to reduce inflammation.

· In India, decoction of young fruit used for catarrh and urinary troubles. Also used for fevers, catarrhal attacks, genitourinary irritations such as dysuria, gonorrhea and leucorrhea, and in cases associated with scaling, pain, and difficulty passing urine.

· Mucilage from from fruits and seeds of fresh, bruised capsules make an efficient, emollient poultice.

· Hindus consider the aromatic seeds as cooling, tonic, and carminative.

· In the Antilles and Guiana, seeds considered stimulant, cordial, and antispasmodic.

(2) In antioxidant assays of five vegetables, strong activity was seen with okra fruit.

Study showed that the mucilage of A esculentus may be used as a pharmaceutical adjuvant and as a suspending agent and other pharmaceutical applications, as a gelling, emulsifying or disintegrating agent.

Study results showed the oral administration of methanol fruit extract of A esculentus produced a reversible reduction in male fertility in rats. There was significant reduction of gross sperm motility, count and life/dead ratio with an increase in abnormal sperm cell in the semen sample.

In a literature review, the healing properties of AE were: (1) Alkaline reaction, soothes irritated membrane of the intestinal tract, lowering of blood sugar, facilitates healing of burns and any kind of skin rashes (2) Mucilaginous texture soak up the unhealthy cholesterol, toxin and mucous waste from the GI tract; acts as a laxative, facilitating ulcer healing and reduction of gastric reflux, antioxidant, anticancer and promoting cardiovascular health.

In a research framework to study the hypoglycemic effects of a water extract of AE in streptozoticin-induced diabetic rats, the findings of expected results from the experiment may reveal underlying mechanism of diabetic pathophysiology, suggesting a new potential target for drug discovery.

Study evaluated a root extract of A. esculentus for CNS depressant and analgesic activity. Significant decrease in locomotor activity was observed. There was significant and dose-dependent reduction of writhing reflex in the acetic acid-induced writhing test and linking response in the formalin induced inflammatory pain. Results suggest analgesic and CNS depressant activity.

Study evaluated the anti-helicobacter pylori activity of methanol and hexane extracts of AE dried fruits on 41 clinical isolates. The methanol extract showed inhibitory effects with no noticeable zone of inhibition with the hexane extract.

Study showed exposure to Abelmoschus esculentus (500 mg/kbw) and Piper guineense (20 mg/kbw and above) induced adverse and detrimental effects on the liver architecture in rat model.

Study showed mucilage of A. esculentus significantly inhibits ulcer induced by indomethacin, ethanol, and water immersion stress. The cytoprotection may be through the formation of a protective layer with increase in mucous secretion from the superficial epithelial cells.

Study evaluated the antimicrobial properties of lyophilized and fresh water extracts of fresh okra pods against Rhodococcus erythopolis, R. opacus, Mycobacterium sp. and M. aurum, Staphylococcus aureus, Escherichia coli and Xanthobacter Py2. The extracts were effective against all bacterial strains except for R. erythropolis, and the fresh water extract was better than the lyophilized extract. Activity was attributed to the two major constituents of the lipid fraction, palmitic and stearic acids.

Study evaluated various extracts of pod extract polysaccharides (OKPs) in vitro and in vivo toxicity studies in mice. Findings of the preliminary study suggest that in both acute and sub chronic studies OKPs is a safe pharmaceutical excipient.