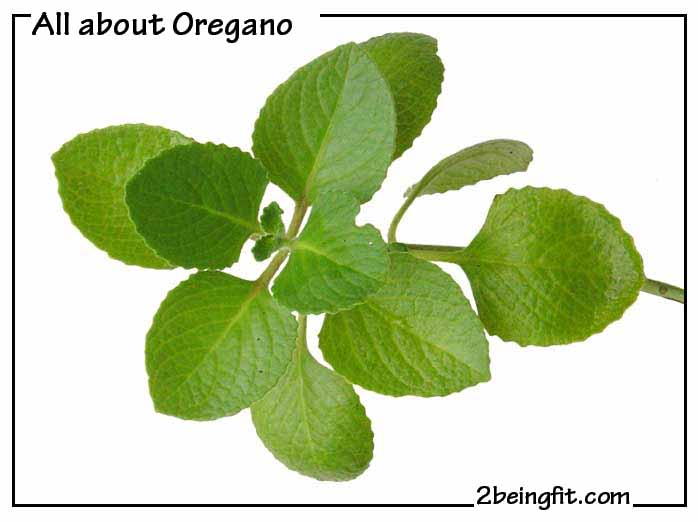 The scientific name of the oregano is Plectranthus aromaticus Roxb.

Oregano is an erect, spreading, branched, rather coarse, strongly aromatic, green herb, with fleshy stems. Leaves are fleshy, broadly ovate, 4 to 9 centimeters long, often heart-shaped, and somewhat hairy, with rounded toothed margins, with the tip and base decurrent. Flowers are small, and occur in distant whorls. Calyx is bell-shaped; the throat is smooth inside, with two lips, the upper lip being ovate and thin, the lower lip having four narrow teeth. Corolla is pale purplish and 5 times longer than the calyx, with a short tube, inflated throat, and short lips.

– Cultivated for its aromatic leaves.

– Also occurring in India to Malaya.

– Aerial parts yielded essential oil with 28 constituents, 16 of which were identified. Thymol (83.39%) was the major compound, while 1-octen-3-ol, terpine-4-ol, eugenol, trans-caryophyllene, caryophyllene oxide and α-cadinol were present as minor constituents.

· As condiment, provides fragrance to salads and strong-smelling meat dishes.

· Sometimes, used as flavoring for drinks.

· In India, leaves of the green type often eaten raw with bread and butter. Chopped leaves used as a substitute for sage. (see study)

· In the Philippines, macerated fresh leaves applied externally to burns.

· Leaves are bruised and applied to centipede and scorpion bites. Also, applied to temples and forehead for headache, help in place by a bandage.

· Leaves in infusion or as syrup used as aromatic and carminative; used for dyspepsia and also as a cure for asthma.

· The Malays used the plant juice or decoction for pains around the areas of the heart or abdomen.

· Decoction of leaves given after childbirth.

· In Indo-China, given for asthma and bronchitis.

· The juice of the leaves for dyspepsia, asthma, chronic coughs, bronchitis, colic, flatulence, rheumatism. The dose is one tablespoonful of the fresh juice every hour for adults and one teaspoonful every two hours, four times daily, for children. As an infusion, 50 to 60 grams to a pint of boiling water, and drink the tea, 4 to 5 glasses a day. For children, 1/2 cup 4 times daily.

· For otalgia (ear aches), pour the fresh, pure juice into the ear for 10 minutes.

· For sore throats, a decoction of two tablespoonfuls of dried leaves to a pint of boiling water, taken one hour before or after meals.

· The Chinese used the juice of leaves with sugar, for cough in children, asthma and bronchitis, epilepsy and convulsive disorders.

· Leaves are applied to cracks at the corners of the mouth, for thrush, headaches; against fever as a massage or as a wash.

· Used for bladder and urinary afflictions, and vaginal discharges.

· Used as carminative, given to children for colic.

· In Bengal, used for coli and dyspepsia.

· Expressed juice applied around the orbit to relieve conjunctival pain.

· Fresh leaves rubbed on clothing or hair at the time of bathing for its scent.

Respiratory ailments like cough, asthma and bronchitis: Squeeze juice of the leaves. Take one teaspoon every hour for adults. For children above 2 years old, 3 to 4 teaspoons a day.

Study showed stabilization of mast cells in rat mesenteric tissue and suggests further studies into mast cells with its role in Type 1 hypersensitivity-mediated diseases like asthma and rhinitis.

Results showed the antimicrobial activity and suggests the herb could be an ideal choice for treating reproductive tract infections.

In a carrageenan-induced rat paw edema model, the aqueous extract of Coleus aromaticus exhibited potent anti-inflammatory activity, attributed to the inhibition of mediators released from the 2nd phase of inflammation.

Study showed both ethanol and hot water leaf extracts of Coleus aromaticus to possess potent antibacterial activity, the ethanol extract showing greater activity. Results provide scientific support for the centuries-old use of the plant as a medicinal herb.

Study isolated forskolin, a diterpenoid, from a methanolic extract of C aromaticus. C aromaticus has been used to treat asthma. Forskolin has been thought to be responsible for its pharmaceutical activity through restoration of antioxidant enzyme activity with its ability to scavenge free radicals. The results validate the use of forskolin as an anti-asthmatic agent.

Study investigating the leaf essential oil of C. amboinicus yielded six components. The major component was thymol (94.3%), followed by carvacrol, 1,8-cineole, p-cymene, spathuylenol, terpinen-4-ol. The oil was insecticidal to white termites (Odontotermes obesus Rhamb). It was more active than synthetic insecticides, Thiodan and Primoban-20 against termites, although it was ineffective against Tribolium castaneum, a stored product pest.

Participants in an Indonesian of study of Batakneese women were given bangun-bangun soup during their nursing period, most consuming a bowl of soup three times daily for 30-40 days. The study aimed to gather information about the women’s beliefs and experiences in the use of the herb. The participants felt their breasts become full with breast milk. Most felt consuming CA leaves helped control postpartum bleeding and help “uterine cleansing.”

Study evaluated the hepatoprotective activity of ethanolic extract of P. amboinicus against paracetamol induced hepatotoxicity in rats. Results showed significant alteration of paracetamol induced changes in the serum and tissue enzymes to near normal values, together with improvement of histopathology profile.

Study evaluated the effect of Coleus aromaticus leaves on blood glucose and antioxidant enzyme levels in alloxan rendered diabetic rats. Aqueous and ethanolic extracts significantly lowered the alloxan mediated hyperglycemia. Activity of antioxidant enzymes such as DOD, CAT, and GPxase were increased in liver homogenate of diabetic animals treated with the extracts.

Cultivated for condiment and culinary use.