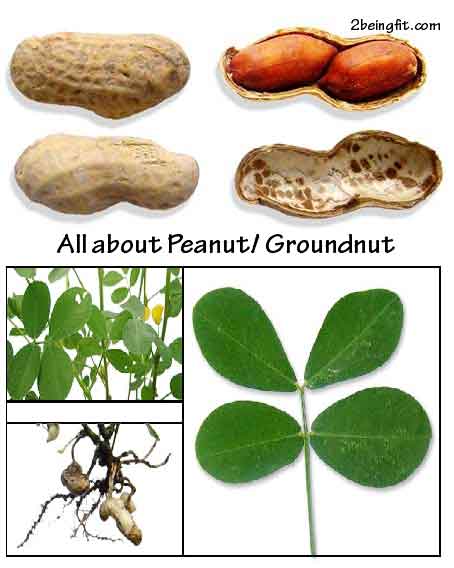 The scientific name of the Peanut is Arachis hypogaea Linn. It is also knownas Ground nut, Monkey nut, Earth nut, and Goober.

Cultivated in the many parts of the world for its edible seeds.

– Kernel of the peanut used for oil extraction; an ingredient in many food products: peanut butter, candies and desserts.

– Teaspoon of oil in milk used for gonorrhea.

– In China, used for gonorrhea and rheumatism; also used for insomnia.

– In Zimbabwe, used for plantar warts.

Other uses of peanut

– Oil used in liniments and ointments.

– Lower grades of oil used for making soap and illumination.

– The leafage makes good fodder and hay for livestock.

– Some portion of the oil is used in the manufacture of some textile fibers.

– Peanut shells are used in the manufacture of plastic, wallboard, abrasives and fuel. Also, used to make cellulose (for use in rayon and paper) and mucilage (glue).

• Diabetes and HDL-C/ good for heart:

SIRT1 is a gene found in humans and mammals, a principal regulator of lifespan, involved in repairing damage from free radicals and boosting mitochondrial energy production. It is activated by caloric restriction or by resveratrol. Resveratrol is believed to modulate the growth of cancer cells. Resveratrol is naturally found in grapes (providing the anti-aging attribute to red wine), some green teas, and even peanuts. Study is being designed to determine if A. hypogaea extract can be a source of resveratrol.

• Effect on Metabolism of Osteoblastic Cells:

Allergy: Peanut allergy is common and can be severe, occurring with a prevalence rate of 0.5% in the general population, accounting for 10-47% of food-induced anaphylactic reactions. Symptoms vary from mild urticaria to severe systemic reactions that can be fatal. Hypersensitivity starts in childhood and usually lasts the lifetime. For many, the history is obvious, commonly occurring in atopic individuals with other food allergies; laboratory will reveal a peanut-specific IgE antibody. Although immunotherapy is promising, present treatment consists of strict avoidance and self-injection of epinephrine.

Toxicity / Aflatoxins: A concern is the possible contamination of damaged or spoiled seeds with teratogenic, carcinogenic aflatoxins – the principal toxins aflatoxin B and G, and the less toxic dihydro-derivatives, aflatoxins B2 and G2, formed by aflatoxin producing molds (Aspergillus flavus, etc). Arachin, with 4 antigens and conarachin with 2 antigens are also reported.