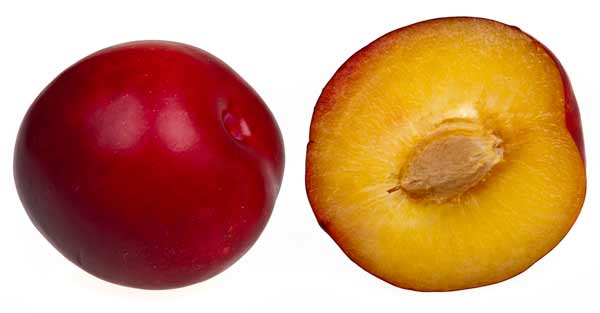 According to the USDA nutrient database,  per 100g of plum contain

Plum is the most effective fruit in both preventing and reversing bone loss. Dried plums are rich source of phenolic and flavonoid compounds,  that are highly effective in modulating bone mass. In women, menopause drastically increases the risk of osteoporosis. Eating plum is good for overall bone health and reduces the risk of bone related diseases due to aging or postmenopausal in women including osteoporosis.

In another study, dried plums improve indices of bone formation in postmenopausal women.

Another study has shown that dried plum reverses bone loss associated with osteopenia.

An animal study has shown that plum prevents bone loss in a male osteoporosis.

Good for neurouns and nerves

Plums are rich in polyphenols that helps to protect the neurons from various neurodegenerative diseases, stroke, traumatic brain injury, and spinal cord injury. It reduces the risk of Alzheimer’s Disease.

According to a study, incorporating polyphenol-enriched Oriental plum into a high-cholesterol diet can ameliorate some of the symptoms of neurodegenerative conditions.

Drinking plum juice helps to improve working memory  and provide other cognitive benefits. Normal aging in humans is accompanied by a decline in cognitive performance that is thought to be due to the long-term effects of oxidative stress and inflammation on neurologic processes. Including fruits like plum provide protection against age related cognitive decline.

Consumption of plum juice has a protective effect against obesity and metabolic disorders that promote the development of cardiovascular diseases.

A study has shown that plum juice has cardioprotective effects can be achieved by replacing drinks high in sugar content with fruit juice rich in polyphenols in a diet.

Intake of plum juice in obesity and other metabolic diseasess can be highly beneficial as it prevent body weight gain.

According to a study, plum juice significantly prevented body weight gain and increased the ratio high-density lipoprotein cholesterol/total cholesterol in plasma. This effect is most likely attributed to the plum’s higher content of polyphenols (three times that of peach).

According to a study Chinese Plum (Prunus salicina) may inhibit the development of breast cancer.

Plum contains potent anti-inflammatory compounds that has various health benefits by way of reducing inflammation. Intake of plum reduces the risk of inflammatory disease, remove swelling, pain or other inflammations.

Plum are rich in polyphenols and other compounds that contribute to potent antioxidant activity. Regular intake of dried plum helps to protect the body from free radicals or oxidative stress related diseases.

Consuming diet that are rich fruits and vegetables can help to protect the body from accumulation of harmful toxins and aid in detoxification.

According to a study, fruits including plum helps in detoxification and prevent DNA damage against the heterocyclic aromatic amines.

Heterocyclic aromatic amines (HAAs) can be formed during the cooking of meat and fish at elevated temperatures and are associated with an increased risk for cancer. The foods rich in fruits and vegetables can protect against cancer.

How to eat plums?