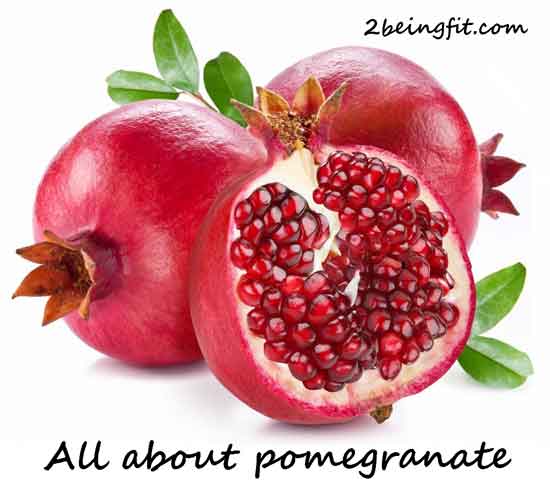 The scientific name of the pomegranate is Punica granatum. Other names include

Pomegranate has been in traditional medicinal use for more than 3000 years. It is a shrub growing 2 to 3 meters high. Flowers are red and showy, usually with six segments in the calyx which are 2.5 to 3 centimeters long. Petals are obovate, about 2 centimeters long. Stamens are numerous. Fruit is rounded, reddish-yellow or purplish, 7 to 10 centimeters in diameter. Rind is thin, tough, and brittle. Fruit contains numerous seeds, each seed surrounded by a watery, translucent, flavorful pinkish-red pulp. It is grown in all tropical countries.

Pomegranate is ripe when its skin is vibrant, glossy and smooth: some variants will be light pink; others golden; and some deep red. When unripe, pomegranates are green and have white lackluster seeds. If unsure, gauge the weight of the fruit: it should feel heavy for its size and. When tapped, it should offer a thudding, dense sound that indicates its juiciness.

As a pomegranate ages, its skin becomes granular and withered, and its sheen gives way to a dull brown hue. However, arils within the pomegranate often retain their integrity and delicious flavor for quite some time after the skin loses its luster. Thus, open a pomegranate before discarding: if the membrane has blackened and the arils have turned brown and mushy, the fruit has gone bad. Use the color and shape of the arils as the best determinant of a pomegranate’s ripeness

– A 100 gm of pomegranate has about 83 calories. It contains about Medicinal properties and uses of pomegranate

-Decoction of juice of the flower with equal parts of Cynodon dactylon used to stop epistaxis and as gargle.
Infusion of flowers used as vermifuge.

– In China, flowers used for premature graying of hair in young men.

Others
Ink prepared from fruit rind.

Scientific proven evidence based health benefits and uses of pomegranate

Numerous Studies in vitro, animal, and clinical trials have shown pomegranate to be a potent antioxidant, superior to red wine and equal to or better than green tea. It has also shown anticarcinogenic, anti-inflammatory, antimicrobial properties, with beneficial effects in various disease processes such as Alzheimer’s, osteoarthritis, neonatal brain injury, male infertility.

Extracts exhibited antimicrobial activity against all organisms except P aeruginosa. Study suggests the potential of bioactive compounds to be developed from P. granatum pericarp for use in treatment of GIT bacterial infection.

Phytochemical screening yielded sterols, flavonoids, triterpenes, phenols and tannins. The study showed high activity against all strains of E. coli. A bioactive agent may be developed from Punica granatum pericarp as an alternative treatment for E. coli O157:H7 infection.

Study evaluated the genotoxicity of a hydroalcoholic whole fruit extract of Punica granaturm. Results of in vivo and in vitro assays detected DNA damage at different expression levels.

• Anti-Inflammatory / COX-Inhibition: Cold pressed pomegranate seed oil have been shown to inhibit both COX and lipooxygenase enzymes in vitro study.

Toxic effects of P granatum fruit extract only occurred at higher doses than those effective in models where the anti-viral activity has been studied or those doses used in Cuban folk medicine.

Study of methanolic extracts of dried pomegranate peels showed high content of phenolic compounds (44%) along with other constituents. Analysis also showed the presence of gallic acid and catechin as major components. Animals treated showed moderate to good healing depending on the concentration of the gel formulation.

In a study of an aqueous suspension of the fruit rind powder of Punica granatum was found to stimulate the cell-mediated and humoral components of the immune system in rabbits.

Study evaluated a hydroalcoholic extract of P. granatum fruit for antibacterial effect on dental plaque microorganisms. Results showed both HAEP and chlorhexedine were effective against Staphylococcus, Streptococcus, Klebsiella, and Proteus species, as well as E. coli. Antibacterial activity was attributed to the ellagitannin, punicalagin.

A randomized, double-blind, placebo-controlled study on 40 patients evaluated the efficacy of Punica granatum gel vs placebo gel on the clinical management of recurrent aphthous stomatitis. Findings reveal the PG extract in form of a 10% oral gel may be beneficial in reducing RAS pain and reducing overall period of complete healing.

Study reports the synthesis of AuNPs using the juice of Punica granatum. The synthesized colloidal AuNPs have been utilized as catalyst for the borohydride reduction of 4-nitrophenol. Results suggest a potential for biomedical applications as well as nanoscience and nanotechnology.

Pomegranates will not continue to ripen once picked. Thus, it is not necessary to wait for them to grow sweeter or redder: Any pomegranate bought from the store will be ready for immediate consumption. This is especially important to keep in mind, considering that others have purchased a golden skin variant with the expectation that it would turn red.

Whole pomegranates keep for one month on the counter and up to two months in the refrigerator.

Store pomegranate arils in a container and place in the refrigerator, where they’ll keep for approximately two weeks.

Pomegranate seeds can also be frozen and used throughout the year. Spread the arils on wax paper on a baking tray: Once frozen, place in a baggie.

Pomegranates are exceptionally versatile. They can make several dishes brighter, sweeter, or earthier, depending. The crunchiness of the seeds also enhances the texture of dishes.

-Top sparkling beverages or teas with a few pomegranate seeds

-Layer hummus with pomegranate seeds to add a hint of sweetness and enhance the color. They also make an exceptional addition to guacamole and salsas.

-Add to salads, particularly those with ingredients such as vegan cheese, berries, persimmons and apples. Perhaps surprisingly, pomegranates work well as a strawberry substitute in most salad recipes.

-Sprinkle atop cakes, cupcakes and cheesecakes. Also, pomegranate seeds can be folded into batters of muffins, cookies and other sweet breads.

-Use the juice to make sorbet or gelato.

-Add to oatmeal or mueslis.

–Dip pomegranate seeds in chocolate, stirring in an assortment of nuts.

-Stir whole seeds into cocktails like mojitos, champagne, and martinis.

Note: Whole pomegranate seeds do not work well in smoothies. Extract the juice before adding; otherwise, the taste is unpleasantly granular.