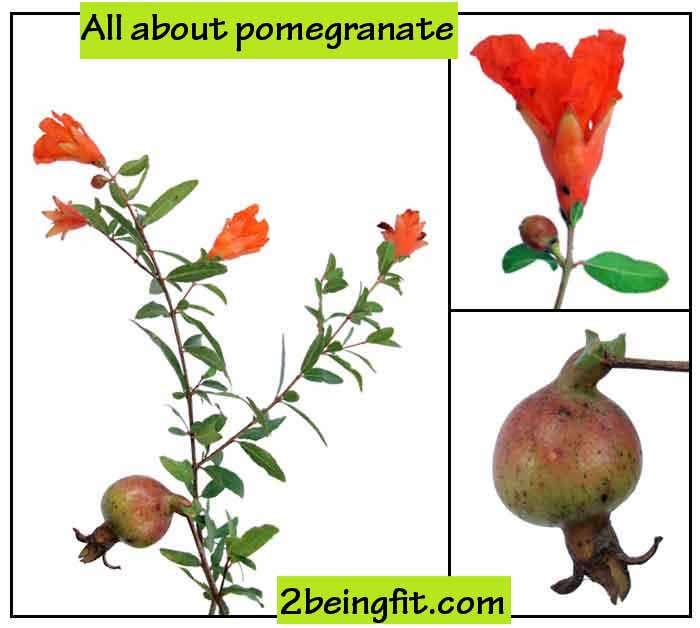 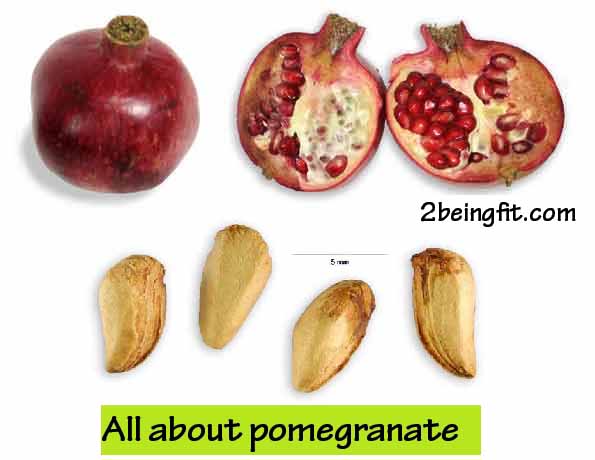 Pomegranate has been in traditional medicinal use for more than 3000 years. Ancient and mystical, it has been written about in the Old Testament of the Bible, the Jewish Torah, and the Babylonian Talmud as a sacred fruit with powers that bestow fertility, abundance, and good luck. It is also part of the iconography of rituals, art, and mythology – the personal emblem of the Roman Emperor, Maximilian, the symbol and heraldic device of the ancient city of Granada in Spain.

– The word “pomegranate” derives from Latin, meaning “fruit of many seeds.”

Granada is a shrub growing 2 to 3 meters high. Branchlets are slender and 4-angled. Leaves are oblong-lanceolate to oblong-elliptic; 4 to 6 centimeters long, short-stalked, and pointed at both ends. Flowers are red and showy, usually with six segments in the calyx which are 2.5 to 3 centimeters long. Petals are obovate, about 2 centimeters long. Stamens are numerous. Fruit is rounded, reddish-yellow or purplish, 7 to 10 centimeters in diameter. Rind is thin, tough, and brittle. Fruit contains numerous seeds, each seed surrounded by a watery, translucent, flavorful pinkish-red pulp.

– Garden plant in the many places.

– Has been introduced in all tropical countries.

– Decoction of juice of the flower with equal parts of Cynodon dactylon used to stop epistaxis and as gargle.

Infusion of flowers used as vermifuge.

Scientific studies on health benefits and uses of pomegranate for health

Numerous in vitro, animal, and clinical trials have shown pomegranate to be a potent antioxidant, superior to red wine and equal to or better than green tea. It has also shown anticarcinogenic, anti-inflammatory, antimicrobial properties, with beneficial effects in various disease processes such as Alzheimer’s, osteoarthritis, neonatal brain injury, male infertility. (1)

Extracts exhibited antimicrobial activity against all organisms except P aeruginosa. Study suggests the potential of bioactive compounds to be developed from P. granatum pericarp for use in treatment of GIT bacterial infection. (4)

Phytochemical screening yielded sterols, flavonoids, triterpenes, phenols and tannins. The study showed high activity against all strains of E. coli. A bioactive agent may be developed from Punica granatum pericarp as an alternative treatment for E. coli O157:H7 infection. (6)

Study evaluated the genotoxicity of a hydroalcoholic whole fruit extract of Punica granatum. Results of in vivo and in vitro assays detected DNA damage at different expression levels. (8)

Cold pressed pomegranate seed oil have been shown to inhibit both COX and lipooxygenase enzymes in vitro. (12)

Study focused on the toxicity evaluation of whole fruit hydroalcoholic extract of Punica granatum. Toxic effects of P granatum fruit extract only occurred at higher doses than those effective in models where the anti-viral activity has been studied in Cuban folk medicine. The LD50 of the extract in OF-1 mice of both sexes after intraperitoneal administration was 731 mg/kg. (3)

Study of methanolic extracts of dried pomegranate peels showed high content of phenolic compounds (44%) along with other constituents. Analysis also showed the presence of gallic acid and catechin as major components. Animals treated showed moderate to good healing depending on the concentration of the gel formulation. (16)

An aqueous suspension of the fruit rind powder of Punica granatum was found to stimulate the cell-mediated and humoral components of the immune system in rabbits. (15)

Study evaluated a hydroalcoholic extract of P. granatum fruit for antibacterial effect on dental plaque microorganisms. Results showed both HAEP and chlorhexedine were effective against Staphylococcus, Streptococcus, Klebsiella, and Proteus species, as well as E. coli. Antibacterial activity was attributed to the ellagitannin, punicalagin. (22)

A randomized, double-blind, placebo-controlled study on 40 patients evaluated the efficacy of Punica granatum gel vs placebo gel on the clinical management of recurrent aphthous stomatitis. Findings reveal the PG extract in form of a 10% oral gel may be beneficial in reducing RAS pain and reducing overall period of complete healing. (28)

Study reports the synthesis of AuNPs using the juice of Punica granatum. The synthesized colloidal AuNPs have been utilized as catalyst for the borohydride reduction of 4-nitrophenol. Results suggest a potential for biomedical applications as well as nanoscience and nanotechnology. (33)

Study in 30 male rabbits showed the consumption of promegranate peel extract containing anthocyanins (polyphenol content 1g/kg diet) despite a significant increase in serum antioxidant capacity did not protect the kidneys from hypercholesterolemia-induced damages. (37)

Pomegranate juice yields elagitannins and their intestinal bacterial metabolites, urolithins (urolithin A and C), has been shown to inhibit CYP1-mediated EROD activity in vitro. Study suggests the ellagitannins and urolithins liberated in the colon from administration of pomegranate juice, in considerable amounts, could potentially reduce the risk of colon cancer progress through inhibition of cell proliferation and induction of apoptosis. (40) (41)

Study evaluated the estrogenic effect of alcoholic extract of P. granatum peel in ovariectomized rats. The extract showed dose dependent activity, with significant increase in uterine weight, femur BMD, and femur hardness, together with increased of serum calcium and phosphorus in the serum and significant decrease in the urine. Results suggest potent estrogenic activity in ovariectomized rats and supports its folkloric use in the treatment of postmenopausal osteoporosis. (43)

Study evaluated an ethanolic extract of rinds of P granatum as antimicrobial on 6 types of bacteria viz. P. aeruginosa, S. typhi, S. aureus, E. coli, Stretococcus spp., and K. pneumonia and a 4 types of fungi viz. C. albicans, A. niger, A. fumigatus, and A. valvas. Results showed antibacterial and antifungal activity on all tested bacteria and fungi, with improvement of wound contraction and healing. Both ointment and lotion formulation of the rind showed wound healing properties. (44)

Pomegranate may interact with coumadin and increase risk of bleeding. (38)

Some medications are changed and broken down in the liver through cytochrome P450 2D6 (CYP2D6) substrates. Pomegranate, by decreasing the breakdown of drugs, might increase the effects and side effects of some medications: amitriptyline (Elavil), codeine, desipramine (Norpramine) flecainide (Tambocor), fluoxetine (Prozac), ondansetron (Zofran), tramadol (Ultram), among others. (42)

– Seeds, supplements in the cybermarket.