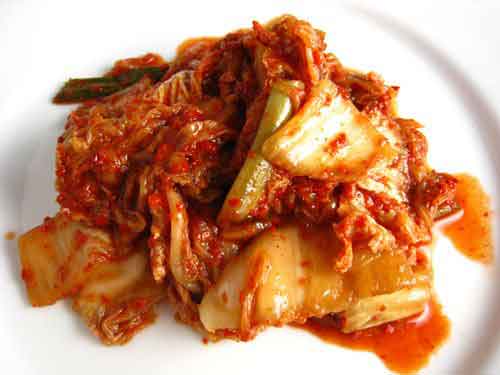 Kimchi is a traditional fermented Korean food that contains beneficial bacteria for human health. It is prepared through a series of processes, including pretreatment of oriental cabbage (or radish), brining, blending with various spices and other ingredients, and fermentation.  It can be made from cabbage, radish, scallion, or cucumber as main vegetable ingredients and the mix of seasonings used to flavor the kimchi.

Kimchi is an important source of vitamins, minerals, dietary fiber, and other nutrients. Kimchi is made of various vegetables that are high in  dietary fiber and low in calories.  The vegetables used in kimchi also contribute to its overall nutritional value. Kimchi is rich in vitamin A, thiamine (B1), riboflavin (B2), calcium, and iron and contains lactic acid bacteria, among those the typical species Lactobacillus kimchii.

Discover proven health benefits and uses of kimchi that makes it must have food item daily for many health reasons.

According to a study, consumption of fermented kimchi reduces body weight and improves metabolic parameters in overweight and obese patients. The ingestion of fermented kimchi had positive effects on various factors associated with metabolic syndrome, including systolic and diastolic blood pressures, percent body fat, fasting glucose, and total cholesterol, compared with the fresh kimchi. These results suggest that the maturity of kimchi (fresh vs fermented) may affect obesity, lipid metabolism, and inflammatory processes.

2. Kimchi is good for arteries and heart

Kimchi contains 3-(4′-hydroxyl-3′,5′-dimethoxyphenyl)propionic acid (HDMPPA) that has antioxidant effect on the prevention of accumulation of plaque in the arteries, thickening of arteries or atherosclerosis . Prevention of Atherosclerosis results in low risk of heart attacks, stroke, and peripheral vascular disease.

Study has shown that a compound in Kimchi (fermented cabbage) is superior to simvastatin in inhibiting atherosclerosis.

In another study, an active principle in kimchi prevents fatty streak formation in arotic sinus.

3. Kimchi is good for skin

According to a study, kimchi contains a probiotic, Lactobacillus sakei, which alleviates allergen-induced skin inflammation.

This makes kimchi effective for treating allergic dermatitis and  reducing allergen-induced skin inflammation. It can be effective in treating chronic, itchy skin condition known as atopic dermatitis or atopic eczema.

In another study, lactobacilli isolated from Kimchi inhibit Atopic dermatitis.

A study has shown that kimchi has antidiabetic activity. Including kimchi in diet can help to prevent diabetes.

According to a study, kimchi made from fermented Ixeris sonchifolia contains compounds with anti-allergic properties and improve allergic reactions, such as pruritus, anaphylaxis, and inflammation.

Probiotics have been shown to be effective in reducing allergic symptoms. Including kimchi in diet act as anti-allergic agent and helps to prevent airway inflammation.

A study has shown that specific strains of lactobacilli isolated from kimchi can effectively suppress airway hyper-responsiveness.

According to a study, kimchi and its active components, including beta-sitosterol, have potential in both the prevention and treatment of cancer, and presents convincing evidence that the anticancer effects may be a result of an inhibition of Ras oncogene signaling.

In another study, a combination of chitosan and Kimchi exhibits antiproliferative activity in human colon cancer cells.

Kimchi is rich in antioxidants that helps to prevent the body against oxidative stress damage.

According to a study, actobacillus plantarum strain isolated from Kimchi exhibits resistance to oxidative stress apparently caused by chelating metal ions rather than by SOD activation.

Bisphenol A (BPA) is common chemical used to harden plastics and it is present almost everywhere. It can be found in medical devices, compact discs, dental sealants, water bottles, the lining of canned foods and drinks, and many other products.

Some of the BPA risks include disrupting normal hormone level, negative impact on brain and behavior of infants and young children, increases the risk of cancer, heart problems and other conditions like obesity and diabetes.

Study has shown that a probiotic bacteria found within kimchi known as Bacillus pumilus is capable of degrading bisphenol A.

A study has shown that a probiotic bacteria found within kimchi known as Lactococcus lactis produces a nisin-like bacteriocin with significant antimicrobial activity.

Certain organophosphates are known to cause a delayed-onset toxicity to nerve cells, which is often irreversible. This has negative impact on cognitive function.

Study has shown that a probiotic strain lactobacillus brevis isolated from kimchi is able to degrade organophosphorus pesticides.

In another study, probiotic bacteria within kimchi are capable of breaking down the organophosphorous insecticide chlorpyrifos.

Kimchi has anti-inflammatory properties that makes it useful in many inflammation related diseases like ulcers and rheumatoid arthritis.

According to a study, HDMPPA found in kimchi may exert anti-inflammatory responses by suppressing LPS-induced expression of proinflammatory mediators and cytokines.

A study has shown that kimchi contains a probiotic strain which produces GABA and has neuroprotective effects on neuronal cells.

In a study, kimchi contains the probiotic Lactobacillus plantarum with antifungal activity which prevent fungal spoilage and mycotoxin formation in food.

Nitrites, whether added or naturally occurring in foods, are potential carcinogens, and controlling their concentrations is important for maintaining good health.

17. Kimchi is good for stomach health and effective against Helicobacter Pylori Infection

H. Pylori is a bacterium that causes chronic inflammation in the stomach and  s a common cause of ulcers. Some of the helicobacter pylori (H. pylori) infection symptoms include bloating, belching or burping, nausea, vomiting, or abdominal discomfort.

Including food like kimchi can help to inhibit such infections.

According to a study, lactobacillus paraplantarum isolated from kimchi inhibits Helicobacter pylori growth and adherence to gastric epithelial cells.