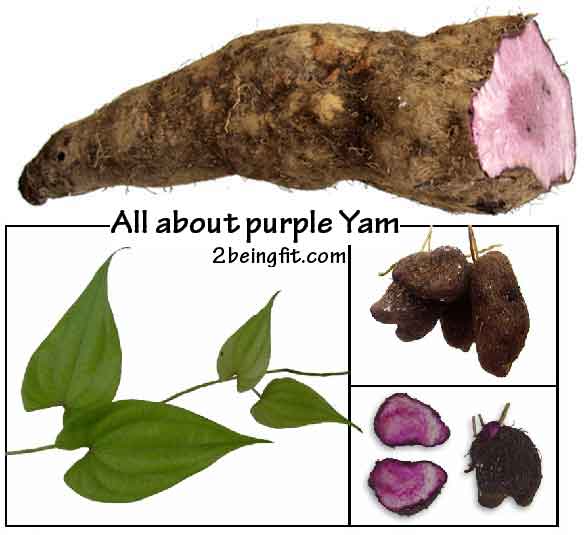 The scientific name of the Yam is Dioscorea alata. It is also known as Greater yam, Purple yam, Ten-months yam, Water yam and  Winged yam.

– Caution: High potassium content suggests caution in use by patients with renal disease.

– Tuber is eaten as vegetable.

– Tubers are rich in B vitamins, especially thiamine and niacin.

– Powdered tubers used as a remedy for piles, gonorrhea, and applied externally to sores.

– In traditional Chinese medicine, used to treat diarrhea, fortify the spleen and kidneys.

Rhizome extract of DA has been shown to possess radical scavenging activity. Study showed both Chinese yam and Japanese yam were beneficial for intestinal health and oxidation prevention.

Dioscorin, the tuber storage protein of yam and its hydrolysates presents potential use for hypertension control.

TLR4 is a promising target for immunomodulating drugs and TLR4 agonists have therapeutic potential for treating immune diseases and cancer. Study shows dioscorin is a novel TLR4 activator and induces macrophage activation via TLR4-signaliing pathways.

Yam may inhibit the acute induction of hypertriglyceridemia and liver enlargement in rats fed a high cholesterol diet.

Pharmacologic and biochemical studies showed yam have both renal protective and hepatic fortification effects in acetaminophen rats. Results provide basis for the use of yam in traditional Chinese medicine for deficiencies of liver-yin and kidney-yin.

Study showed the potential use of D. alata as a functional food to supplement the fiber and mineral needs of consumers, and underlines the need to exploit its used in food fortifications and formulations.

Study evaluated purified mucilages from three Taiwanese yam cultivars to evaluated the immunostimulatory effects on murine innate and adaptive immunity. Results showed all three mucilages could elevate the number of T. helper cells in peripheral blood and enhance the phagocytic activity of granulocyte, monocytes, and macrophages, both ex vivo and in vitro tests. The production of specific anti-ovalbumin (OVA) antibody and OVA-stimulated splenic proliferation were all enhanced by all mucilage groups. Results suggested the tuber mucilage might function as an immunostimulatory substance.

• Protective Effect in Aniline-Induced Splenic Toxicity: Study evaluated the protective effects of ethanolic extract of D. alata on hematological and biochemical changes in aniline-induced spleen toxicity in rats. Results suggest the involvement of oxidative and nitrosative stress in aniline-induced splenic toxicity and DA protects the rats from toxicity, which may be due to its antioxidant property and the presence of different phytochemicals.