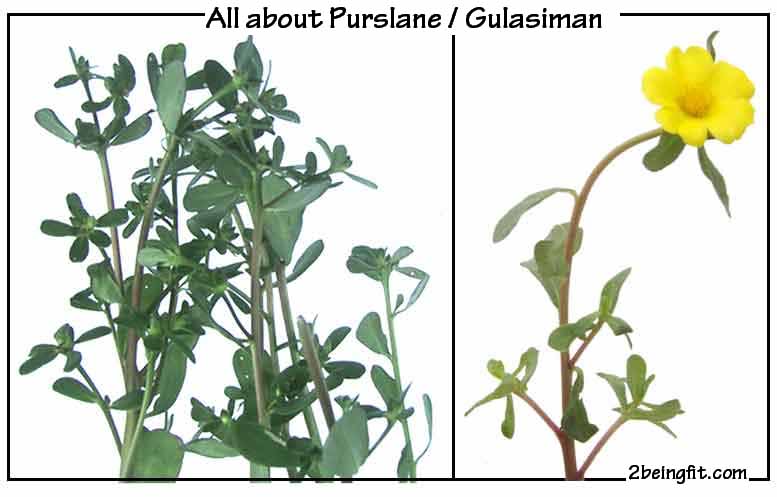 The scientific name of the purslane is Portulaca oleracea (Linn.). It is also known as Common purslane, Little hogweed, Pigweed, and Wild portulaca.

Gulasiman is an annual, prostrate or spreading, succulent, branched, smooth, often purplish herb, with the stems 10 to 50 centimeters long. Nodes are without appendages. Leaves are fleshy, flat, oblong-obovate, 1 to 2.5 centimeter long, with obtuse apex and wedge-shaped base. Flowers are yellow, stalkless, axillary and terminal few-flowered heads. Heads are solitary or cymose with compressed buds. Petals are five and yellow, about as long as the sepals and notched at the tip. Flowers open only for a few hours in the morning. Fruits are capsules which dehisce horizontally containing many minute, dark brown, heart-shaped seeds.

– A very common weed found throughout the world in settled areas.

– Now occurring in all warm countries.

– Contains large amounts of l-norepinephrine, a neurohormone with vasopressor and antihypotensive activities.

– Leaves are succulent and acid.

· Harvest when the vegetative parts are well-developed.

· May also be used fresh.

– Plant has been used as medicine, vegetable and spice since ancient Egyptian times.

– Leaves are succulent; used as a vegetable component in salads.

– Condiment for fish and meat.

– Used as alternative pot herb, particularly as an article of diet for scurvy and liver diseases.

· Decoction of leaves used as a wash for skin diseases.

· Poultice of leaves and tops used as anti-hemorrhagic, also used for burns, cuts and wounds.

· Juice used for dysmenorrhea, dysuria, dysentery, and for expelling worms.

· Leaves are used for poulticing tumors, bad wounds and ulcers; also for blenorrhagia and leucorrhea.

· The seeds have also been used as antilymphocyte; also used for dysentery and mucous diarrhea.

· In Punjab, used as vermifuge.

· Infusion of leaves and tops used as diuretic beverage.

· Decoction of seeds used as diuretic.

· Poisonous bites or snake bites: get the fresh plant, wash thoroughly, add salt and crush, then cover the affected part with the preparation.

· Eczema: put crushed plant with its juice over the sensitive area.

· Furuncle infections: aside from treatment taking drug orally, external administration may also be applied in the form of poultice.

· In China used an emollient.

· Expressed juice of the plant used for prickly heat, as well as burning discomfort of hands and feet.

· In Jamaica juice prescribed for spitting up of blood; also used as cooling medicine for fevers.

· In Nigeria applied topically to swellings.

· In Cochin-China and the West Indies seed is used as stomachic and to promote menses; also used as diuretic and emollient.

· Tamil practitioners used the bruised leaves as application in erysipelas; an infusion is used as diuretic in dysuria.

· In Guadalupe plant is used as tonic and febrifuge.

· In Siberia used as a gastric sedative.

· In Indo-China decoction of leaves used for dysentery.

· In the Gold Coast leaves are ground, mixed with oil, and tied on boils to bring them to a head; also, eaten with tiger nuts (Cyperus esculentus) as a remedy for skin diseases; also, macerated in cold water and drunk as heart tonic and diuretic, and for palpitations.

· In Columbia used as emollient, and applied to tumors and callosities.

·Magic / Ritual: In ancient times, considered an anti-magic herb, and strewn around the bed to protect against evil spirits; also to protect from nightmares. It was carried in battle to protect soldiers. It was also suppose to attract love and good fortune.

Study in mice showed inhibition of gastric lesions induced by HCl or absolute alcohol, with dose-dependent reduction in ulcer severity. The highest dose of extracts were similar to sucralfate in activity. Results suggest that P. oleracea has gastroprotective action and support its use in folk medicine for gastrointestinal diseases.

Ethanol extract of aerial parts showed significant anti-inflammatory and analgesic effects with intraperitoneal application but not with oral administration. Results support some of the claimed traditional uses for relief of pain and inflammation.

• Antitussive Effect / suppress coughing, possibly by reducing the activity of the cough center in the brain:

Extract study showed a specific and marked activity of P. oleracea against dermatophytes of genera Trichophyton.

Study using seed powder showed that purslane seeds could be effective and safe in the treatment of abnormal uterine bleeding.

Study results suggest that P oleracea extract may protect against cisplatin-induced renal toxicity and may serve as a novel combination with cisplatin to limit renal injury.

Study showed the methanolic extract of P oleracea seeds to be active against S aureus, B bronchiseptica and Bacillus cereus. Study has also shown the extract of PO to have antifungal properties against Aspergillus niger and C albicans.

Study evaluated the effects of alcoholic extract of Portulaca oleracea on lipid profiles of 60 Wistar rats. Results showed significant reduction of cholesterol and triglyceride levels. The activity was attributed to high density of antioxidants and omega-3 found in the herb.

Toxicity studies on a methanolic extract were done on mice intraperitoneally. LD50 values showed moderate toxicity with effects on the kidney, lung, and liver in a dose-dependent manner.

Antidiabetic treatment with an extract of leaves showed significant reduction in thiobarbituric acid reactive substances and an increase in glutathione reductase in both liver and kidney of STZ diabetic rats. Results showed the extract possesses moderate antidiabetic activity with potent antioxidant potential in diabetic conditions.

Study evaluated the therapeutic effect of an ethanolic extract of Portulaca oleracea on tumor-bearing female mice with mammary adenocarcinoma. Results showed significant reduction in tumor volume, inhibition of tumor growth rate. Histologically, there was extensive tumor cell necrosis in the center. Results were attributed to the action of phytochemical compounds against tumor cells. There was no toxic effects on acute toxicity study.

Cell-mediated and humoral immunity may have antitumor effects. Study evaluated the immunological effect of a 79% ethanolic extract of P. oleracea in the treatment of transplanted mammary tumor in female albino mice immunized with Candida albicans Ag. Results showed PO has the capability to enhance the immune system. There was an increase in delated type hypersensitivity reaction and antibody titer in treated tumor-bearing mice.

Study evaluated the anti-ovulatory, anti-estrogenic activity of a chloroform extract of air dried aerial parts of P. oleracea in female albino rats. Results showed an anti-fertility effect on ovulation by reducing the number of ova in ovary together with biochemical changes.