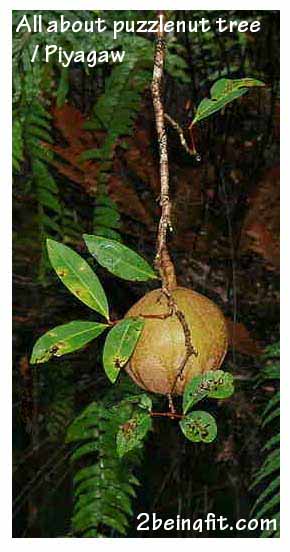 The scientific name of the puzzlenut tree is Xylocarpus moluccensis . It is also known as Cannonball mangrove.

Puzzlenut tree  is a small tree growing 3-12 meters high. Leaves are abruptly pinnate, with pairs of leaflets which are elliptic or obovate, 8 to 18 centimeters long, 4 to 8 centimeters wide, with a pointed base and rounded tip. Flowers are small, white, 4-parted, borne on short terminal or axillary panicles. Fruit is spherical, 9 to 12 centimeters in diameter, with 6 to 12 seeds. Pericarp is hard and fibrous, splitting into 4 valves. Seeds are angled, with a spongy integument.

– Including Philippines, India and Ceylon through Malaya and New Caledonia.

– The seeds, fruits and stems yield a large number of limonoids.

Fruits or seeds , powdered or decoction, are used for diarrhea.

In Malaya, used for cholera, colic diarrhea, and other abdominal affections.

In Bangladesh, used for gastrointestinal disturbances such as cholera, dysentery, diarrhea; also for fever.

Study on the CNS effects of X moluccensis showed that both the bark and peumatophore extracts possess CNS depressant activity, the pneumatophore more potent than the bark. It produced dose-dependent reduction of pentobarbitone-induced hypnosis, reduction of locomotor and exploratory activities.

Methanol extract showed to be rich in flavan-3-ols and procyanidins. It exhibited excellent DPPH radical scavenging and 15-lipoxygenase inhibiting activities attributed to the high content of catechins and procyanidins.

Study of methanol extract of XG bark for in experimental diarrhea induced by castor oil and magnesium sulfate in mice showed significant dose-dependent antidiarrheal activity and supports its use in traditional herbal medicine.

Study in experimental rodent host evaluating the antifilarial activity of X. granatum showed the fruit extract contains promising in vitro and in vivo antifilarial activity against human lymphatic filarial parasite B. malayi. The activity was attributed to two pure compounds gedunin and photogedunin.