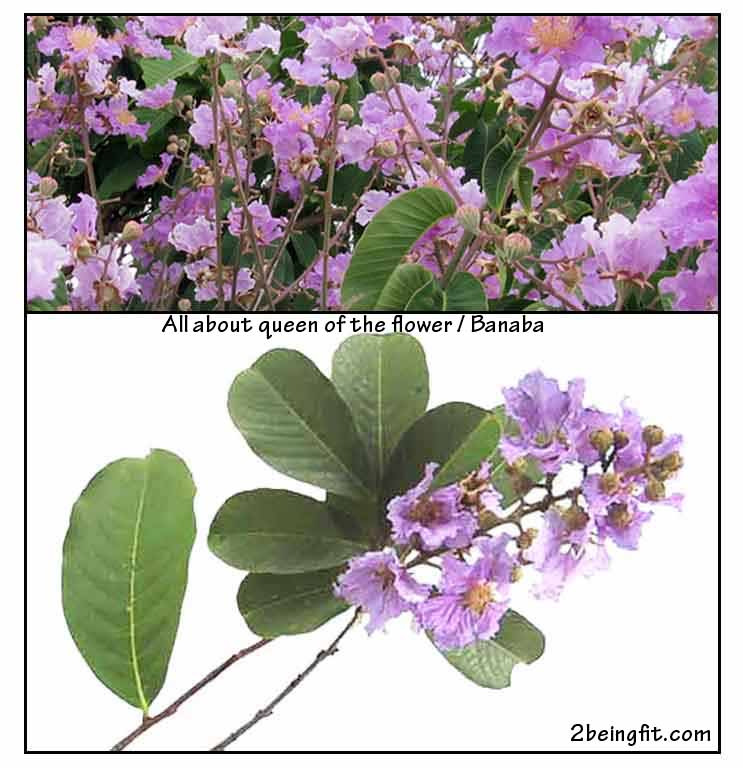 The scientific name of the queen’s flower is Lagerstroemia speciosa (L.) Pers. It is alos known as Pride of India , and Queen of flowers.

Queen of flower is a deciduous tropical flowering tree, 5 to 10 meters high, sometimes growing to a height of 20 meters. Bark is smooth, grey to cream-colored, and peels off in irregular flakes. Leaves are smooth, large, spatulate, oblong to elliptic-ovate, 4 to 8 centimeters in width, 12 to 25 centimeters in length, shedding its leaves the first months of the year. Flowers are 6-parted, purplish lilac or mauve-pink, rarely pink, 5 to 7.5 centimeters across, and borne in large, terminal panicles up to 40 centimeters in length. Petals are oblong-obovate or obovate, shortly clawed, and 3 to 3.5 centimeters long; the margins are undulate and hardly fimbriate. Fruit is a large nutlike capsule, obovoid or ellipsoid, and 2 to 3.5 centimeters long. Seed is pale brown, with a wing 12 to 18 millimeters long.

– In most or all islands and provinces, chiefly in secondary forests at low and medium altitudes.

– Cultivated in many parts of the world for its beautiful flowers.

– Also reported in India to southern China and southward through Malaya to tropical Australia.

– Penta-O-galloyl-glucopyranose (PPG) – identified as the most potent of the gallotannins, with a higher glucose transport stimulatory activity than Lagerstroemin. In addition to stimulating glucose uptake in fat cells, it also has anti-adipogenic properties.

– Before shedding, the leaves are bright orange or red during which time it is thought to contain higher levels of corosolic acid.

– Old leaves and ripe fruit are considered to yield the greatest amount of an insulin-like principle. Twenty grams of old leaves or fruit, dried from one to two weeks, in the form of 100 cc of 20% decoction was found to have activity equivalent to 6 to 7.7 units of insulin.

– Mature leaves, young leaves and flowers have an activity that ranged from 4.4 to 5.4 units of insulin per 100 cc of 20% decoction, or equivalent to around 70% of the activity of the leaves or fruit.

– Study of the wood yielded no insulin-like principle; the bark and roots yielded a very small amount.

– Decoction of leaves of all ages used for diabetes mellitus. Some physicians believe the dried fruit decoction to be better.

– Roots have been used for a variety of stomach ailments. Leaf decoction for diabetes; also use as a diuretic and purgative.

– Decoction of old leaves and dried fruit (dried from one to two weeks), 50 gms to a pint of boiling water, 4 to 6 cups daily has been used for diabetes. Old leaves and ripe fruit are preferred, believed to have greater glucose lowering effect. Young leaves and flowers have a similar effect, though only 70% that of matures leaves and fruits. The wood has no known glucose lowering effect; the bark, a very small amount. A decoction of 20 gms of old leaves or dried fruit in 100 cc of water was found to have the equivalent effect to that of 6 to 7.7 units of insulin.

– In Pahang decoction of bark has been used for the treatment of diarrhea.

– Infusion of bark used for diarrhea.

– The bark, flowers and leaves used to facilitate bowel movements.

– Decoction of fruits or roots gargled for aphthous stomatitis.

– Decoction of leaves and flowers used for fevers and as diuretic.

– Leaf decoction or infusion used for bladder and kidney inflammation, dysuria, and other urinary dysfunctions.

– Seeds considered to have narcotic properties; also employed against aphthae.

– It makes a useful timber tree.

Scientific proven benefits and uses of queen of the flower / Banaba

Studies have identified several compounds as responsible for its anti-diabetic activity. (1) corosolic acid (2) Lagerstroemin, an ellagitannin (3) gallotannins, of which PPG – penta-O-galloyl-glucopyranose–was identified as the most potent, with a higher glucose transport stimulatory activity than Lagerstroemin. In addition to stimulating glucose uptake in fat cells, it also has anti-adipogenic properties.

Screening has identified lagerstroemin, flosin, and reginin A as activators of glucose transport in rat fat cells.

Banaba has been extensively studied for its application in the treatment of diabetes. Early on, Its ability to lower blood sugar was attributed to corosolic acid, a triterpenoid glycoside, believed to facilitate glucose-transport into cells.

Studied with abutra, akapulko, makabuhay for antidiabetic activity through activation of glucose transporter activity. One of the active principles from Banaba was the tripertene, corosolic acid.

Studies in mice suggest an antiobesity effect. It is becoming a common ingredient in weight-loss supplements / products as a metabolic enhancer.

It is also being studied for its use in the treatment of blood pressure, renal and immune system benefits.

Studies in mice suggest a lipid lowering effect – decreasing triglyceride and total cholesterol levels. To date, no toxicity has been identified.

Study showed irradiated banaba leaf extract mixed with insulin was found to have a higher hypoglycemic activity compared with mixtures of nBLE and insulin. Results may suggest the potential of reducing the cost of insulin management by lessening the dependence on recombinant insulin.

Xanthine oxidase is a key enzyme involved with hyperuricemia, catalyzing the oxidation of hypoxanthine to xanthine to uric acid. The study supports the dietary use of the aqueous extracts from Banaba leaves for the prevention and treatment of hyperuricemia.

(3) antioxidative activity of a water extract

(4) inhibition of xanthine oxidase by aqueous extract, 31 and anti-inflammatory activity in mice.

Study showed antioxidant and anti-inflammatory activities from the ethyl acetate and ethanol extracts of Lagerstroemia speciosa.

A hydroalcoholic extract of leaves of L. speciosa demonstrated antioxidant activity in the nitric oxide model.

Study of a hot water extract of leaves of L. speciosa showed hypoglycemic activity on experimental diabetic rats through suppression of gluconeogenesis and stimulation of glucose oxidation using the pentose phosphate pathway.

A polyherbal formulation for obesity containing G. sylvestre, G. cambogia, and Lagerstroemia speciosa was studied in normal and obese STZ-induced diabetic rats. Results showed an antidiabetic and antiobesity effect similar to that observed with glibenclamide and sibutramine.

• Safety of Banaba and Corrosoli Acid:

Study confirmed the presence of essential metals i.e., magnesium, zinc, and iron in Lagerstoremia speciosa. Heavy metals like cadmium, chromium, mercury, and lead were below detectable limit. Magnesium and zinc were used in the treatment of type II diabetes. Study supports the anti-diabetic activity of the species.

• Effect of Extract on Hyperglycemia and Obesity:

Study showed a unique combination of a glucose uptake stimulatory activity and effective inhibition of adipocyte differentiation induced by IS-IBMX-DEX in 3T3-L1 cells suggesting use in prevention and treatment of hyperglycemia and obesity in type II diabetes.

Gallic acid and ellagic acid from extracts of leaves and stems of banaba showed novel anti-HIV activity through inhibition of reverse transcriptase and HIV-protease, suggesting promising candidates for development of topical anti-HIV1 agents.

• Inhibition of TNF-Induced Activation of NF-kappaB in Cardiomyocyte H9c2 Cells:

Diabetes leads to cardiomyocyte hypertrophy in association with an upregulation of vasoactive factors and activation of nuclear factor (NF)-kappaB and activating protein-1. Lagerstroemia speciosa completely blocked the activation of NF-kappaB by TNF in a dose- and time-dependent manner in H9c2 cells. This may explain the possible inhibition of diabetes-induced cardiomyocyte hypertrophy.
• Neuroprotective / STZ-Induced Painful Neuropathy:

Tablets, extracts, capsules, powder and tea in local commerce and the market.