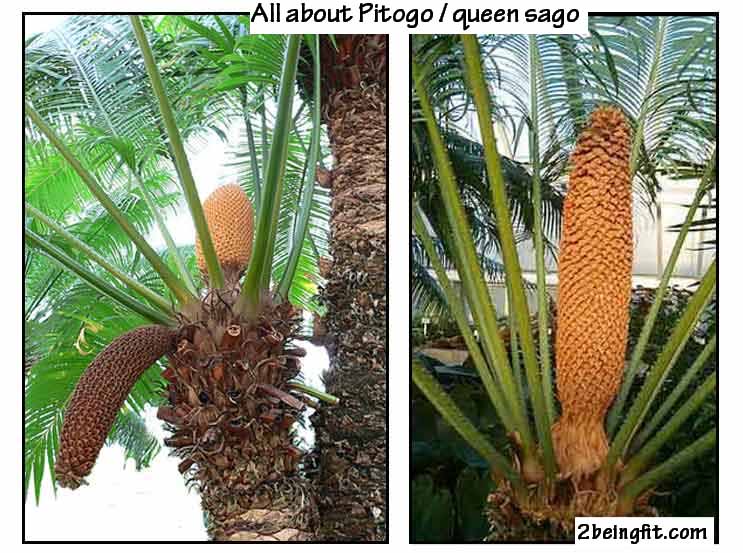 Cycas, the single genus of the family Cycadaceae, consists of about 100 species, chiefly Indo-Chinese (40) and Australian (27). Cycads vary in size from trunks only a few centimeters to several meters tall. Slow in growth, cycads live long, some species known to last about 1,000 years.

Cycas rumphii is commonly confused with Cycas revoluta, but pitogo is a much larger plant, with larger leaves and smooth and glabrous ovules. Trunk is stout and woody, growing to a height of 12 meters, 20 to 50 centimeters in diameter, with a round and symmetrical crown of large, hard, stiff, evergreen leaves. Leaves are 1.5 to 2.5 meters long, crowded at the apex of the trunk, leaflets are 20 to 30 centimeters long, about 1 centimeter wide, smooth and shining, falcate, 45 to 90 on each side of the midrib. Male cones are terminal, elongated-cylindric or ovoid-cylindric. Leaves are numerous, about 30 centimeters long and densely rusty-tomentose. Fruit is smooth, ovoid to ellipsoid, 3 to 5 centimeters long.

– Mainly found along or near the seashore.

– Commonly cultivated  as an ornamental plant.

– Toxicity from a glucoside in the seeds, with phytosterine.

– The plant yields a resin that is used medicinally in India.

– Male bracts believed to be narcotic, stimulant and aphrodisiac.

– The untreated seeds may be poisonous.

– In Malabar, the starch from the trunk and seed is considered superior to Caryota flour but inferior to rice flour, and eaten by the hill tribes and when rice becomes scarce.

– Seeds also reportedly eaten in India, the Andaman, in the Malay Peninsula, and the Dutch Indies.

– In India, a kind of sago is prepared from the starch stored in the trunk.

– In some parts of the Philippines, the young leaves (still rolled up) are cooked and eaten as vegetable.

– In India, resin is used for malignant ulcers, facilitating suppuration.

– Male bracts used are a narcotic, stimulant and aphrodisiac.

– In the Philippines, powdered roasted whole seed is mixed with coconut oil and applied to wounds, boils, itchy skin lesions.

– Poultice of fruit-bearing cone is applied to loins for nephritic pains.

– Tincture from pericarp of seed and bark is used for edematous swellings.

– Seeds are used for dizziness, headaches, and sore throats.

– Poultice of bark used for swellings.

– In Dutch East Indies, juice of young mucilaginous leaves used for flatulence and vomiting of blood.

Cycad neurotoxins and flying foxes connect: The high incidence of neurodegenerative diseases (ALS-PDC) among the Chamorro people of Guam is proposed as connected to the consumption of flying foxes high on plant neurotoxins from its foraging on neurotoxic cycad seeds.

: In a study of tropical plants searching for inhibitors of the cytochrome P-450 aromatase which may be efficacious in treating estrogen-dependent tumors, extracts of 5 cycad folia, including Cycas rumphii, were all found to contain inhibitors of the human enzyme. (3)

(1) Cycads yields ß-methylamino-L-alanine (BMAA), which has been implicated in the in the etiology of the devastating neurodisease ALS-PDC found among the native Chamorros on Guam.

(2) BMAA is potentially neurotoxic. Studies have suggested the BMAA is not produced by the cycad itself by by the cyanobacteria present in the collaroid roots. A review supports a connection between cycad exposure and the development of ALS-PDC in Guam. B-methylaminoalanine (BMAA) is found in cycad. However, analytical methods have not been adequately validated. Still, human epidemiological data suggests the amount of BMAA in processed cycad flour is not enough to be the main cause of degenerative neurological disease after consumption of cycad flour.

Cycad Study support the hypothesis that the neurotoxicity of BMAA is due to an excitotoxic mechanism, involving elevated intracellular calcium levels and bicarbonate. BMAA alone did not produce the increase in Ca++ levels, and results suggest an involvement of product of BMAA and CO2, namely a ß-carbamate, which may be the causative agent of ALS-PDC on Guam.