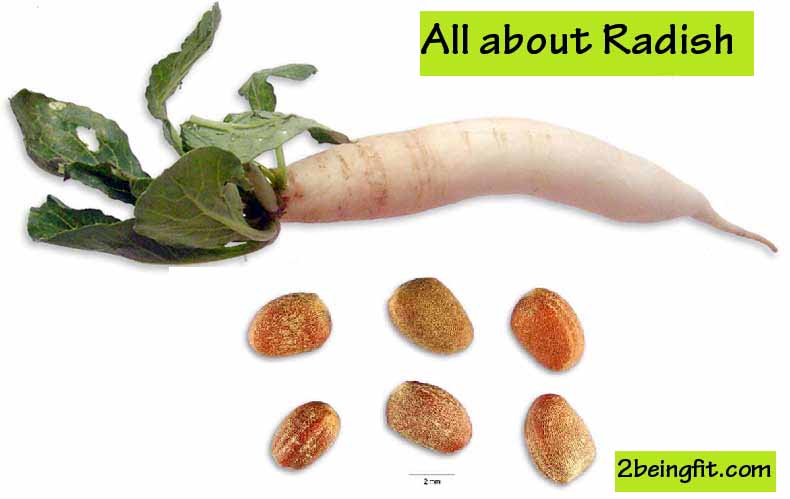 The scientific name of the radish is Raphanus raphanistrum subsp. sativus (L.) Domin.

Radish is a coarse, annual crop plant. Roots are fleshy, pungent and variable in size and form. Leaves are roughly hairy, the lower ones lyrate. Flowers are variable, about 1.5 centimeters long, usually white or lilac, with purple veins, sepals erect, lateral ones saccate at the base. Pod is indehiscent, lanceolate, cylindrical, and 2 to 2.6 centimeters in length, and terminates in a long beak. Seeds are separated by pith.

– Widely cultivated in the world at all altitudes.

· The juice of the fresh root is considered powerfully antiscorbutic.

· When seeds are ripe, harvest the whole plant, sun-dry, remove the seeds and dry again. Crush on use. Roots can also be sun-dried for use.

– A popular, common, and inexpensive vegetable, eaten raw or cooked.

· For diarrhea: boil the fresh leaves to concentrated decoction and drink.

· Juice of leaves increases the flow of urine and promotes bowel movements.

· Juice used to expel wind from the bowels.

· Roots are crushed and applied locally as dressing or poultice for burns, scalds, ecchymoses, or fetid or smelly feet.

· Decoction of root used for fevers.

· Decoction of roots used to bring out the rash in eruptive fevers.

· Coughs: Decoction of flowers; or, boil 6 to 15 gms seed preparation to decoction and drink.

· Seeds promote the flow of urine, bowel movements, and menstruation.

· Seeds used for cancer of the stomach.

· In Mexico, black radish has been used for treatment of gallstones and for decreasing blood lipids.

Pharmacological basis for the gut stimulatory activity of Raphanus sativus leaves: A study on the crude extract of RS leaves showed the presence of a histaminergic component plus a weak spasmolytic factor supporting its traditional use for constipation.

Study of crude powder of Raphanus sativus leaves reduced the risk of liver damage by paracetamol.

Study of aqueous extract of the bark of RS on rats showed a significant decrease in the weight of stones. Study also showed an increase in 24 hour urine volume compared to control.

Study of methanol extract of RS showed inhibition of lipid peroxidation in vivo and in vitro, providing protection by strengthening antioxidants like glutathione and catalase. Results suggest inclusion of the plant in every day diet may be beneficial.

Study showed that the sprouts of Japanese radish has the potential to alleviate hyperglycemia and may serve in the primary prevention of diabetes mellitus.

Study of a crude extract of seed showed hepatoprotective effect against liver damage induced by CCl4.

Study evaluated the hepatoprotective activity of radish enzyme extract in vitro and in vivo test. Results showed the enzyme extract can significantly diminish hepatic damage by toxic agents such as tacrine or CCl4.

Study of crude extract of seeds in doses of 600 and 800 mg/kg may be protective against liver damage caused by CCl4.

Study of aqueous extract showed lowering of plasma triglyceride, but had no effect on plasma glucose or cholesterol.

Based on bioaccumulation coefficient (BAC) analysis, mustard and radish can be considered high accumulator plants for Cu. Radish has been shown to produce 10 times more biomass than the other three plant studies, and accumulation of copper was higher in the root tissue of radish and mustard.