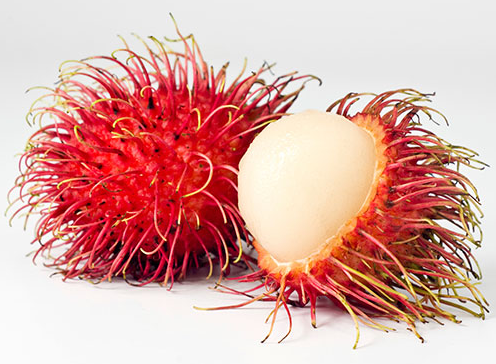 The scientific name of rambutan is Nephelium lappaceum. It is also know as Ramboostan. It is medium sized tropical tree, grows well in the regions of South East Asia including Thailand, Burma, India, Sri Lanka, Vietnam, Hawaii, Philippines, and Indonesia. It is also grown in South America, Tanzania, Australia, Zanzibar, Central America, and Caribbean.

The skin of the Rambutan fruit is covered with many spines and taste similar to lychee with hint of grape and mildly citrus sour hints. When purchasing rambutan, it is best to buy with the stems still attached. Otherwise, purchasing loose fruits at room temperature is acceptable as long as the color of the fruits is still bright and inviting. However, it is best to wrapped them tightly in plastic wrap and chilled them lightly to regulate moisture well.

How to check ripeness of rambutan ?

Rambutan turns from lime green, then pale yellow, and at its peak ripeness, to either yellow or red. The red varieties may be a light red with hints of orange, to a deep red with purplish hues. A good rambutan is slightly squeezable, indicating that the jelly-like flesh is ready for consumption.

Overripe rambutans are brown with brittle spikes. The aril shows signs of browning, smells fermented and becomes slimy instead of watery. Inspect fruits carefully for any cracks as well, as sour juice leakage is a surefire sign of spoilage. A 1oo gm of rambutan has about 59 calories. It contain

Traditional medicinal properties of the rambutan

The fruit acts as an astringent, stomachic, and anthelmintic or antiparasitic. The leaves as part of a poultice manage headaches, and the roots treat fever and tongue diseases. The bark has astringent properties and used for diseases of the tongue. Fruit decoction is used for diarrhea and dysentery. The edible pulp of the fruit is used as an refrigerant in fevers.

A study has shown that rambutan peel or rind rich in natural antioxidant and antiproliferative activity which helps to suppress the growth of cancer cells, fight free radicals and lipid peroxidation.

Another study has shown that rambutan peel is effective in management of excessive glucose in the bloodstream or hyperglycemia, often associated with diabetes mellitus. The results confirmed that the rambutan rind contains effective antioxidants; able to regenerate functional pancreatic beta cells and has a hypoglycemic potential.

A study has shown that rambutan seed aqueous extracts  has antibacterial properties, that helps to inhibit infection against pathogenic bacteria, both gram positive including Staphylococcus aureus, Streptococcus pyogenes, and Bacilllus subtillis and gram negative bacteria including Escherichia coli and Pseudomonas aeruginosa.

In another study the fruit o the rambutan has anti-viral and anti-herpes properties that can significantly affect the development of skin lesions and reduced mortality.

Another study has shown that rambutan rind has anti-inflammatory and anti-ulcer properties. It’s supplementation may be beneficial in preventing the tissue damage and inflammatory conditions in arthritis.

Avoid eating raw rambutan seed as it can be toxic but becomes edible when boiled or roasted.

How to open or cut rambutan?

If rambutan is ripe, then it’s skin can be peeled with the fingertips. If the skin is a little tough, take a sharp knife and cut a small incision in the middle of the fruit. Then, try to open and peel back half the skin. Squeeze the other half and the rambutan will come out.

Rambutans can be stored at room temperature for only a maximum of three days. In refrigeration, the fruits can last for up to a week. Store the fruits at 10 Celsius, ideally wrapped in a paper towel or perforated plastic bag. Consume immediately once removed from the refrigerator, as rambutans are sensitive to temperature fluctuations. Canned rambutans last for 9 months. It is possible to freeze the fruit, but the flavor and texture will be adversely affected.

It can easily substitute lychees in any recipes.

Add rambutan into your salad, pudding, or juices.