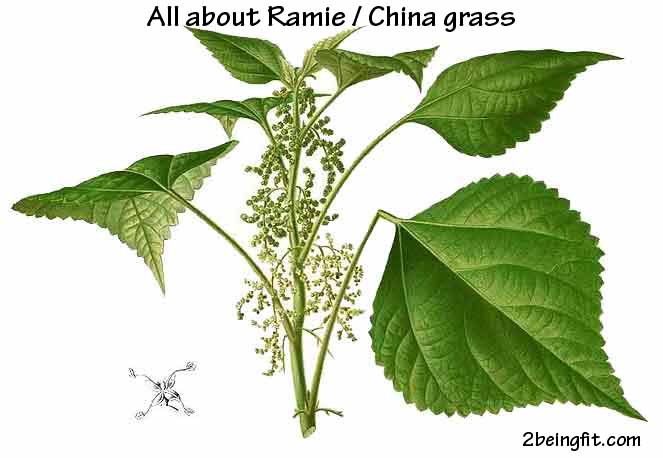 The scientific name of the Ramie is Boehmeria nivea (L.) Gaudich. It is also known as China grass,  Madame Parquet, and Ramie grass.

Ramie is an erect, branched, monoecious perennial shrub, 1 to 2 meters high, with a single cylindrical stem, and hairy branches and petioles. Leaves are long-petioled, alternate, broadly ovate, 10 to 18.5 centimeters long, 6 to 14 centimeters wide, with tapering pointed tip, coarsely toothed margin, the upper surface green, roughened with few scattered hairs, the lower surface white, except the nerves, and densely covered with appressed, matted, white hairs. Flowers are small and clustered; the clusters arranged in axillary panicles shorter than the petioles; unisexual, apetalous. Staminate (male) flowers have 4 calyx lobes which are green in color. Stamens are 4.

– A native of southern China.

– Now cultivated in many tropical and subtropical countries.

– Like the common nettle of Europe, possesses styptic properties.

Propagation through cuttings from the rhizomes and by seeds.

· In China roots are reputed to be quieting to the uterus and recommended in threatened abortion.

· Pounded fresh leaves may be used as poultice for swelling pains caused by sprains.

· Used for wounds from poisoned arrows, for snake and insect bites.

· In decoction, used as local application in rectal disease.

· Leaves used in wounds and fluxes as astringent.

· Decoction of roots and leaves used as tonic in cases of dysentery.

· In Taiwan, used in folk medicine for hepatoprotection and hepatitis treatment.

· Malays use the leaves for poulticing boils.

· Used for treatment of fluxes and wounds, prevent miscarriages and promote drainage of pus.

· Fiber: A source of fiber or a constituent of fabric with cotton, wool or silk. In the Philippines, the fiber is used for making strings, blankets, and cloth. It is one of the oldest textile fibers, used in mummy cloths in Egypt around 5000-3300 BC.

The study on the BN extract exhibited potential anti-HBV activity in the animal model of HBV viremia.

B nivea has been established to be a cause of asthma. The study showed no cross-reactivity with Parietaria and suggests that ramie may be a new independent allergen.

Commonly used to treat miscarriages, the test examined its safety for embryonic development in pregnant mice. Results showed B. nivea extract did not cause significant embyotoxicity or maternal toxicity in mice, although it caused cytotoxicity in cultured ECS (embryonic stem cells) at a high dose.

Ramie has great ability to tolerate and accumulate heavy metals. Study showed the feasibility of phytoremediation of Cd-contaminated farmland by ramie cultivars that have obtained cadmium accumulating capacity through screening and training.

• GRP78 in inhibition of HBV secretion:

Study of a root extract of B. nivea showed an inhibitory effect on blocking assembled virion secretion of HBV possibly through reduction of GRP78 (78-kDa glucose-regulated protein).

Study evaluated the anti-HBV effects of BNL extract in HepG2.2.15 cells transfected with human HBV DNA. Results showed reduction in the secretion of HBsAg and HBeAg in HepG2.2.15 cells. There was also a significant decrease in the content of HBV DNA in the medium secreted by the HepG2 cells. Among the fractions the CF and EAF exhibited the most potent anti-HBV activity.

Ramie has been established to be a cause of asthma. The rate of positive reactions to ramie in intradermal tests was 11.7% among adult asthmatic patients in the Nagasaki area. Ramie pollen-specific IgE antibodies were measured by ELISA, with the positive provocation test group showing higher O.D. values than the positive intradermal test group (p < 0.05). In cross-reactivity study, results ramie may be a new independent allergen.