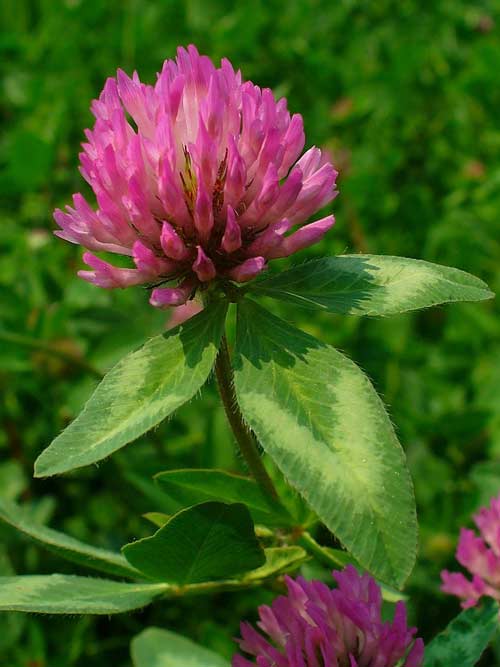 Red clover is a source of many nutrients including calcium, chromium, magnesium, niacin, phosphorus, potassium, thiamine, and vitamin C. Red clover is a rich source of isoflavones (chemicals that act like estrogens and are found in many plants). According to a study, red clover contains isoflavones that helps to prevent bone loss, and has potentially protective effect on the lumbar spine in women.

Red clover supplementation can be an effective natural way to deal with  osteoporosis.

Red clover isoflavones can be an effective herb for management of hot flashes as it significantly reduce menopausal hot flush symptoms.

In a study, intake of 80 mg of red clover isoflavone dietary supplement per day resulted in a significant reduction in hot flashes.

Using red clover with pomegranate powder works synergically, that not only helps to loose weight but also act as  potent and protective agent for relieving menopausal syndrome.

A study has shown the intake of red clover and dried pomegranate powder together act as anti-obesity and anti-osteoporotic agent.

A study has shown that red clover demonstrates aromatase inhibition activity, which may reduce the risk of estrogen receptor positive breast cancer.

According to another study, red clover helps to stops and kill human glioblastoma cells and brain cancer cells.

According to a study, red clover extracts contains many major compounds, that are useful in treating various disorders ranging from menopausal to metabolic syndrome.

Anti-inflammatory and good for heart health

Red clover herb act as natural, effective anti-inflammatory agent that helps to reduce inflammation in the body and helps to protect the system from harmful effects of the toxins. Along with that red clover is also good for heart health which helps to reduce the risk of many cardiovascular diseases.

A study has shown that red clover may reduce inflammation associated with cardiovascular disease by ameliorating lipopolysaccharide-induced toxicity.

Add fresh flower in to your salad, sauces, dips etc.