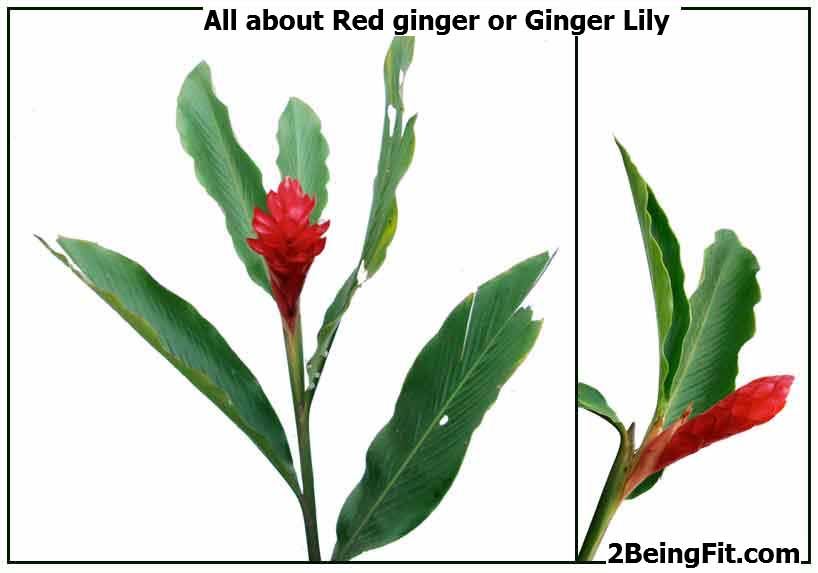 Ginger lily or Red ginger is a rhizomatous perennial, leafy herb forming large clumps, growing to 3-4 meters tall. Leaves are lanceolate, glabrous. Inflorescence is a terminal spike, often pendulous, showy, up to 90 centimeters long. Flowers are small, white, 1 or 2 , arising from the red bracts of the spike, 2.5 centimeters long. Fruit is a capsule. Pseudostems formed by leaf sheaths emerge from underground rhizomes.

– Widely cultivated and naturalized in the tropics.

– Essential oil of A. purpurata leaves and flowers yield a predominance of α-pinene, β-pinene and 1,8 cineol.

– Study of essential oil of inflorescences showed A. purpurata to be composed mainly by mono- and sesquiterpenes. The major compounds were ß-pinene and α-pinene, trans-caryophyllene, camphene, and 7-epi-α-selinene. (17)

– α-Pinene, β-pinene and 1,8 cineol predominate predominate in the essential oil of leaves and flowers. (21)

– In the West Indies, used for stomach complaints.

– In Trujillo, Venezuela, oral use of boiled inflorescence used to treat cough symptoms. (21)

Study evaluated a hydroalcoholic extract of A. purpurata obtained from dried leaves. The flavonoids kaemferol-3-O-glucoronide and rutin were detected at higher concentration in the EA and butanolic extracts, with the latter showing highest flavonoid percentage (94.3%). (1)

The major components of leaf oil of A. purpurata were 1,8-cineole, ß-pinene and (E)-methyl cinnamate; the oil from the flowers was dominated by ß-pinene and a-pinene. (2)

Study of extracts for vasodilator effects showed they were able to induce long-lasting endothelium-dependent vasodilation. Study showed a better vasodilator effect than control, results in agreement with the quantification of phenolic compounds in the extracts. It presents a possible natural source for bioactive compounds useful for the treatment of hypertension. (4)

Study evaluated three solvent extracts of leaves, roots, and rhizomes for in vitro activity against six strains of bacteria and four pathogenic fungi. Ethanolic extract of rhizomes showed wide spectrum of activity against all tested bacteria, with notable activity only with Candida albicans. (7)

CXCR4 is the receptor for chemokine, CXCL12 (stromal cell-derived factor-1, SDF-1) involved in problematic diseases like AIDS, cancer cell metastasis, leukemia cell progression and rheumatoid arthritis. Study aimed to identify the novel CXCR4 inhibitors from bioactive compounds in an EA extract of A. purpurata by GC-MS analysis. The EA extract yielded 32 bioactive compounds, some of which shows the better glide score compared with Cyclophosphamide (FDA approved drug). Results suggest the bioactive compounds may act as novel inhibitors for CXCR4. (10)

Study evaluated the chemical profile, vascular reactivity, and acute hypotensive effect (AHE) of ethanolic extract of leaves of A. purpurata. Results showed a vasodilation action partially mediated by nitric oxide. Rutin-like flavonoids were quantified in the EEAP (1.8 ± 0.03%), and the total flavonoid and polyphenol rations were 4.1 ± 1.8% and 5.1 ± 0.3%, respectively. (14)

Study evaluated phytochemical constituents, antibacterial activity and anticancer activity of A. purpurata leaves. The EA extract of leaves showed antibacterial activity with a zone of inhibition from 5 to 14 mm at various concentrations. It also showed potential anticancer activity against PA1 ovarian cancer cell line with half MIC value of 110.25 µg/mL and dose-dependent decrease in cell count for all concentrations tested. (16)

Study evaluated the toxicity of essential oil from Alpinia purpurata inflorescences to Sitophilus zeamais (maize weevil). No toxicity was noted when applied directly on the cuticle of insects. It showed toxicity to adult insects through fumigation with LC50 of 41.4 µL/L in air. (see constituents above) (17)

• Ginger supplements should be avoided by those with known allergy to ginger or other Zingiberaceae family members, including Alpinia purpurata.

• It has been suggested pregnant women should avoid ginger in the excessive amounts (more than 1 gram dry weight per day). The German Commission E recommends avoidance during pregnancy due to its possible inhibition of testosterone binding in the fetus. It should not be used for nausea of pregnancy and should be avoided by pregnant women with a history of bleeding disorders and miscarriages. (see: Luya)

• Ginger decreases platelet adhesiveness and should be used with caution by people on anticoagulant therapy.

– Seeds in the cybermarket.