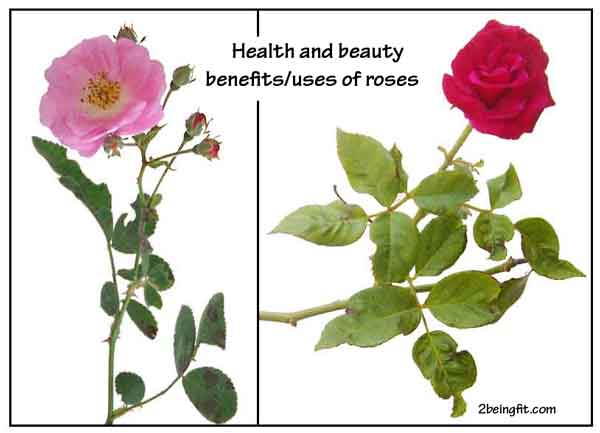 The scientific name of garden rose or rose are Rosa cvs and hybrids.

The genus Rosa is believed to have originated in central Asia about 60 to 70 million years ago, spreading and growing wild throughout the Northern Hemisphere: Asia, Europe, Northern Africa and North America.

The Damask rose, Rosa damascena, dates back to 900 BC. It is the national flower of Iran and has been called the “Flower of the Prophet Mohammad.” The use of rose oil dates back to ancient Persia. Petal steam distillation produces rose water and rose oil; 2000 petals yield a mere drop of rose oil.

The ophratus, the Greek scientist, educator and writer, is credited with compiling the first detailed botanical description of roses around 300 BC. His work is considered the primer for all cataloging of roses.

One of the most extensive genus in the plant kingdom, with some botanical reports of over 4,000 species. A prickly shrub, most grow upright, some are creeping. Flowers are yellow, white, pink or red, solitary or in branched clusters or corymbs at the end of short branches. four to five petals and sepals. Leaves are alternate, pinnnate, usually with five to nine leaflets with a terminal leaflet. Fruits are usually are fleshy and berrylike at maturity. – Widely distributed plant in America, Africa, and Asia.
– Cultivated in all climates and places.
– The garden roses cultivated in the Philippines include the hybrid teas, floribundas, grandifloras, minature climbers and shrubs.

– It has been suggested rose petals suitable for medicinal purposes must yield a deep rose-colored, astringent, and fragrant infusion when boiling water is poured on it.
Constituents

– Rose hips, the flower base which is swollen to seed, are excellent sources of vitamin A, B3, C, D, and E.

– Also contains a coloring agent and flavor that makes them useful for syrup, eyewashes, tonics.

– Rosehips are a good source of vitamin C and used for making syrups, jams, jellies, wines and tea blends.

– Rose-water made from some species (Rosa centifolia) is used as ointment for ophthalmia.

– The water is soothing to dry skin.

– Petals considered astringent; can be used as skin wash to staunch bleeding from scrapes and cuts.

– Infusion of flowers used for lavage in leukorrhea and blennorrhagia.

– Decoction of flowers used for phthisis, hemoptysis, diarrhea and dysentery.

– Therapeutic uses of R. damascena in ancient medicine include the treatment of abdominal and chest pain, menstrual bleeding, digestive problems and inflammation. North American Indian tribes use a root decoction as a cough remedy for children. Also used for wound healing, migraine, allergies.

• Inhibition of Cox-1 and Cox-2 Activity/ treatment of osteoarthritis with rose hip:

In a study to investigate the use of rose hips in the treatment of osteoarthritis, the extracts of rose hip showed good inhibition of both cox-1 and -2.

Study isolated a galactolipid from dried and milled fruits of Rosa canina which showed anti-inflammatory activity with inhibitory effects on chemotaxis of human peripheral blood neutrophils in vitro. The presence of the galactolipid in rose hips may explain the anti-inflammatory properties of rose hip herbal remedies.

The article is a comprehensive review on the pharmacological effects of R. damascena, one of the most important species of the Rosaceae family. It is principally cultivated for its use in perfume, medicine, and the food industry. The review covers its various products: rose water, rose oil, dried flowers, hips, and other products, together with composition and pharmacological effects, i.e., neuropharmacological, hypnotic, analgesic, neuroprotective, antioxidant, anticonvulsant, cardiovascular, anti-HIV, antidiabetic, antimicrobial, anti-inflammatory, etc.

Although based on sparse amount of data, meta-analysis indicate that rosehip powder does reduce pain. It seemed twice as likely that a patient allocated to rosehip powder would respond to therapy, compared to placebo.