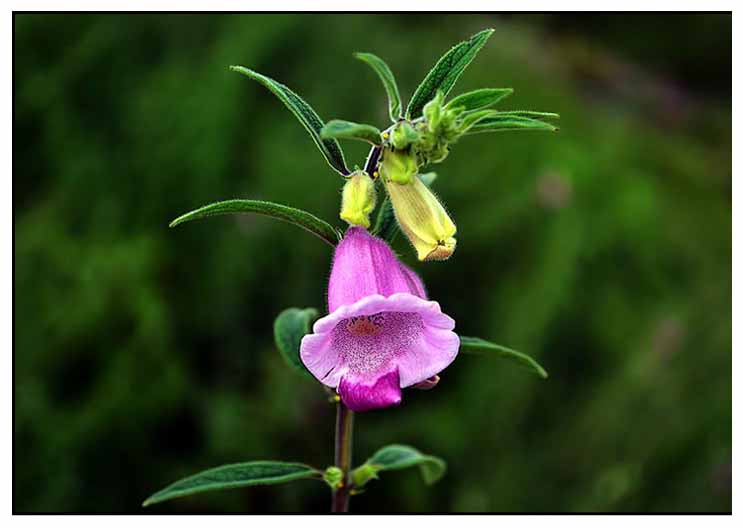 Sesame plant is an erect, annual, hairy herb, 50 to 80 centimeters in height. Leaves are oblong or ovate, 3 to 10 centimeters long, the lower ones lobed, the middle ones toothed, and the uppermost subentire. Leaf stalks are from 1 to 5 centimeters long. Sepals are lanceolate, 6 to 7 millimeters long and imbricate. Corolla is about 3 centimeters long, hairy and whitish, or with purplish, red, or yellow marks. Stamens are 4, inserted. Fruits are capsules, 2- or 4-celled, oblong, about 2.5 centimeters long, erect, and splitting halfway or quite to the base at maturity. Seeds are small and black.

– Cultivated here and there throughout the world.

– Often occurs in open waste places as an escape plant.

– Has a high percentage of fixed oil which can be used as an antirheumatic in massage treatment.

– Sesame oil, also known as pil or gingelly, has a pale yellow color, a pleasant odor and taste.

– Neither warming nor cooling.

• Seeds yield lignan, lignan glycosides, and sterols; phenylethanoid glycosides from the whole plant, and phenolic acids from the leaves and seeds.

· Collect seeds as soon as the fruits ripen, harvest the above ground portion, sun-dry and collect the seeds, dry again.

· Whole seeds used by bakers in making cakes and sweetmeats.

· For chronic constipation, roasted seeds are taken alone, with honey, or mixed liberally with other foods.

· Oil extracted from seeds used as antirheumatic in massage therapy.

· Leaves, which abound in the gummy matter, mixed with water to form a bland mucilage used for infantile cholera, diarrhea, dysentery, catarrh, cystitis, and strangury.

· Plaster of ground seeds applied to burns and scalds.

· Leaves with equal parts of sesame oil and lime water are a popular dressing for burns and scalds.

· Decoction of seeds with linseed used for coughs and as aphrodisiac.

· Lotion made from roots and leaves used as a hair wash; also used to promote hair growth and make it black.

· Decoction of seeds laxative for children.

· The oil of seed used for treatment of ulcers and suppurating wounds.

· Diseases of the kidney or liver associated with dizziness, tinnitus, and haziness of vision: get see preparation from 8 to 14 gms and mix with equal volume of Morus leaf preparation. Powder, add honey and water and drink.

· Seeds ground to a paste with water, given with butter, for bleeding piles.

· In Sierra Leone the mucilaginous juice of the plant is used by women to destroy headlice.

· In Yucatan, seeds given as laxative to children.

· Seeds and oil used as emmenagogue.

· Malays use the oil in tonics.

· In Africa, decoction of leaves used as aphrodisiac. Decoction of plant used for malaria. Leaves chewed as alternative to tobacco. Powdered leaf applied to snake bites. Decoction of seeds used for hemorrhoids and regulation of the menstrual cycle.

· In European medicine the oil was once used pulmonary tuberculosis.

· Perfumery: Oil use in perfumery in Europe, North America and India.

Scientific studies on the benefits and uses of sesame

Alcoholic extract of seeds of Sesamum indicum caused hypotensive effects in anesthetized rats. It also caused decreased rate and force of atrial contractions; contractile responses in rat uterus. The results indicate that the alcoholic extract of SI contain acetylcholine-like constituents that explains its folkloric use. (3)

Study on the effect of SI in hypertensive diabetics on atenolol and sulfonylurea showed reduction in systolic and diastolic BP, decrease in glucose, HbA1C, LDL and TC, with increase in activities of enzymic and non-enzymic levels of antioxidants. (5)

Study of the ethanolic extract of Sesamum indicum, vitamin C and SI+VC promote fertility from their testosterone-increasing effects and their antioxidant effects. (10)

Sesamin has been shown to be insecticidal and is synergistic to pyrethrum.

Study showed (1) the acid value which is the index of free fatty acid content due to enzymatic activity was very low (2) No potential for soap making (3) High peroxide value (4) seed oils were cyanide free (5) seeds are a good source of oil, with a seed content of 50% light yellow crude oil with a pleasant smell. (12)

A petroleum ether fraction of an alcoholic extract yielded sesamin, sesamolin, stigmasterol, ß-sitosterol, and stigmasterol-3-O-ß-D-glucoside. A butanol fraction yielded ferulic acid, rhamnetin, verbascoside, kaempferol-3-O-ß-D-glucorunide, and mequelianin (quercetin-3-O–D-glucuronide). Tested extracts exhibited a reductive effect on blood glucose of diabetic rats, attributed to possible inhibition of free radicals and inhibition of tissue damage induced by alloxan. ß-sitosterol and ferulic acid may have contributed to the hypoglycemic activity of the alcoholic extract. The alcoholic extract has a potential as an alternative natural antioxidant, antihyperglycemic and anticoagulant. (13)

Study investigated the anti-hyperlipidemic effect of sesame in a high-fat fed rabbit model. Results showed supplementation with sesame oil, but not sesame seed, can ameliorate serum levels of lipids and hepatic enzymes in rabbits under a high-fat diet. (15)

Study investigated the toxic effect of an ethanolic leaf extract of Sesamum indicum on the histomorphology of adult Wistar rats liver. The leaf extract caused an phased architectural pattern with atrophic hepatocytes and dilated sinusoid suggesting toxicity to the liver of Wistar rats. (16)

Study investigated the effects of Ardeh, paste of ground unhulled sesame seeds, on lipid profiles and atherogenic lipid parameters on 41 patients with type 2 diabetes mellitus. Results showed significant decrease in serum triglycerides and atherogenic index of plasma (AIP) with slight decreases in other atherogenic lipid parameters and a mild increase in HDL-C. Results suggest Ardeh could have favorable effects in decreasing CVD risk factors in T2DM.
(17)

Study evaluated the properties of a plant gum obtained from S. indicum. Moisture content was found to be low. All formulations released the drug in the hydrated matrix through polymer relaxation. The findings suggest the gum can be used for intestinal drug delivery. (19)

Study evaluat3d the prophylactic effect of aqueous extract of of S. indicum on ethanol induced hepatotoxicity in rats. S. indicum possesses antioxidant and hepatoprotective properties that eliminate the deleterious effects of toxic metabolites of ethanol. SI treatment simultaneous with ethanol exhibited similar effects to those of SI pretreated groups, while SI post-treatment group did not show the same level of protection. (23)

Study evaluated the effects of topical sesame oil on pain severity and frequency of NSAIDs patients with trauma. Results showed topical application of sesame oil could reduce pain severity and frequency of NSAIDs treatment in patients with upper and lower extremity trauma. Results recommend complementary use of the oil for relief of pain with its low cost, easy usage, and lack of side effects. (24)

Single-blind clinical trial in 56 women evaluated the efficacy of S. indicum in inducing menstrual bleeding in women with oligomenorrhea (infrequent menstrual flow at intervals of 36 days to 6 months or 5-7 cycles in a year). Results showed S. indicum was well-tolerated and partially effective in inducing and maintaining regular bleeding, and can be considered as an alternative therapy for patients who are not suitable candidates for hormone therapy. (27)

Study showed an ethanolic extract of S. indicum + vitamin C as well as ESS and VC promote fertility due to both their testosterone-increasing effects and their antioxidant effects. (36)

Study evaluated the effect of ethanolic extract of S. indicum on kidney function in STZ-nicotinamide induced diabetic rats. Results showed a significant decrease in levels of serum total protein, albumin, and globulin, and significant increase in blood urea, serum creatinine and uric acid when compared to normal rats. Normalization of marker enzymes in the serum and histopathological results revealed the protective effect and potential to control hyperglycemia in STZ induced diabetic rats. (37)

Study evaluated the effect of external use of sesame oil in the prevention of phlebitis in 60 patients with colon or rectal cancer. Results showed external use of SO is effective, safe, and well tolerated prophylaxis for phlebitis. (38)

Cultivated for culinary use.

Reference list of scientific studies mentioned in this article