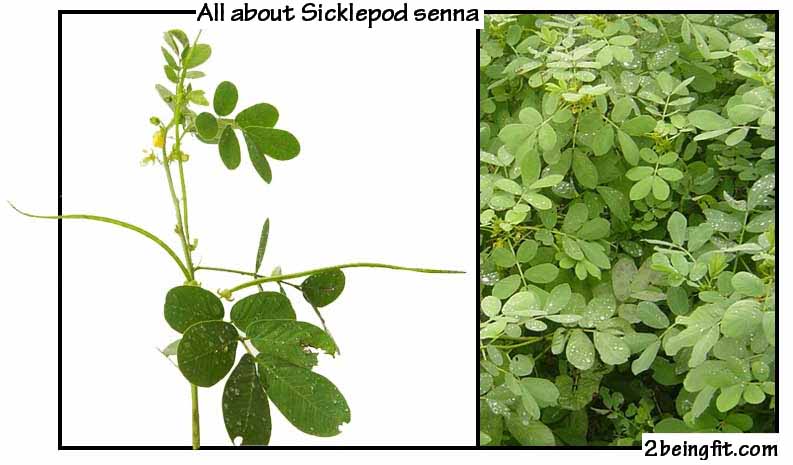 Sicklepod is  a stout erect, smooth, rank-smelling, half-woody annual, 1 meter or less in height. Leaves are 8 to 12 centimeters long and pinnately compound with 6 leaflets. Leaves are furnished with glands on the main rachis between leaflets. Leaflets are oblong-ovate or obovate and 2 to 5 centimeters long. Flowers are crowded, in pairs, in the axils of the upper leaves, and about 1.5 centimeter across. Calyx-tube is short; sepals are imbricate. Petals are 5, yellow, subequal. Stamens are 10, rarely all perfect, 3 to 5 being reduced to staminodes or sometimes absent, anthers mostly basifixed opening by terminal spores or with the slit more or less continuous downward. Ovary sessile or stalked. Fruits are slender pods, up to 15 centimeters long and 3 to 4 millimeters thick. Seeds are flattened in the same direction as the pod.

– A very common weed throughout many countries, in settled areas at low and medium altitudes.

• Plant yields emodin to which the medicinal properties are attributed to.

· Collect pods from August to October when the seeds are about to ripen.

· Sun-dry, remove the pericarp before using.

• Roasted seeds used as coffee substitute. In Mexico, used as substitute for coffee or for adulterating it.

· In the Philippines, the entire plant, in decoction, is used as purgative and vermifuge.

· Leaves and seeds used as a remedy for ringworm and scabies.

· Poultice of seeds and leaves used for scabies, psoriasis, ringworm and eczema.

· Paste of the roots used for ringworm.

· Decoction of leaves used in children suffering from fever while teething.

· Leaves fried in castor oil are used as application to foul ulcers.

· In Africa and India, a traditional medicine for the treatment of ulcers. Pounded fermented leaves added to food or local gin and taken orally as purgative or anthelmintic.

· Malays use decoction of leaves as a mild purgative or as a cure for coughs.

· In India, used for rheumatism and gout.

· In Indo-China, pods are used for dysentery and ophthalmia.

• Pesticide: In organic farms in India, used as a natural pesticide.

• Dye: In India, seeds also used in dyeing along with indigo.

Study showed ethanol extract of CT to have potent antifungal activities against Microsporum canis and C albicans, suggesting a potential as a antifungal agent.

• Immunomodulatory / Capable of modifying or regulating one or more immune functions/ Anthraquinones:

The study of chemical components of the volatile oil from C. tora showed antioxidant activity of potential use for hyperlipidemia, hypertension and inflammatory disease.

A possible reflex mechanism of hypotensive action of extract from Cassia tora seeds: Study suggests a possible vagal reflex that alters the vasomotor tone of the sympathetic NS.

Study demonstrated the anthelmintic activity of alcohol and aqueous extracts of Cassia tora.

Study of the methanol extracts from the raw and roasted seeds of Cassia tora exhibited significant inhibitory properties against ACE (angiotensin converting enzyme).

Study in albino rats showed the protective effects of Cassia tora against carbon tetrachloride induced hepatotoxicity attributed to its effective free radical scavenging that accounts for its antioxidant property.

Study results indicate that constituents of C. tora seeds have a beneficial effect on postprandial blood glucose control which may be partly due to mediation by stimulated insulin secretion from the pancreas of diabetic rats.

In vitro study evaluated extract and prepared test ointment for antimicrobial activity against two bacterial species (S. aureus and E. coli) and two fungal species (A. niger and M. gypseum). The benzene extract was most potent against Staphylococcus aureus and A. niger. Phytochemical analysis of the seeds showed it mainly contained anthraquinones.

In a study on Wistar albino rats, a seed extract showed potent anti-ulcerogenic properties probably via cytoprotective mechanism from its antioxidant properties.

Study evaluated the neuropharmacological effect of leaves in mice. Ethanol and aqueous extracts showed significant activity in the behavioral model of hole board test. Chlorpromazine was the standard drug reference.

Cassia tora mucilage exhibited the strongest suspending ability. The mucilage can be a stabilizer of choice if high viscosity is desired, and serve as a good thickening agent both in the pharmaceutical and food industries.

In the market, available in a variety of commercial products.