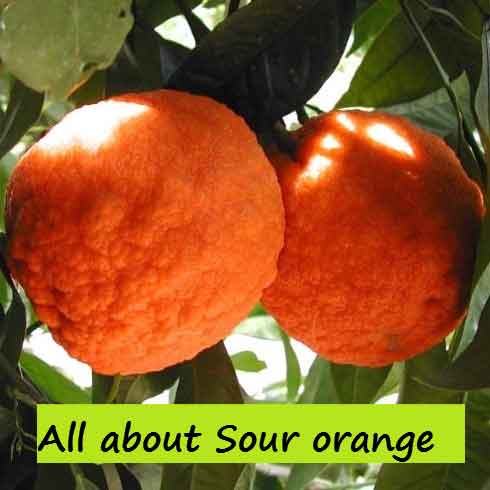 Sour orange refers to an orange with a sour, pungent, mouth-puckering quality. It is found in many regions of the world including Central America, Italy, France, Tropical Africa, China, India, Morocco, Haiti, Taiwan, Cyprus etc.

How to check for ripeness of sour orange?

There are more than 1500 types of it. Some types of sour orange possess green skins, some yellow, while others are deep orange. This means the fruit’s best indicator of ripeness is the fragrance and aroma of its skin. The best oranges have incredibly oily, zesty peels that practically burst with a citrusy aroma. Look for fruits that feel heavy for their size, and avoid those with hard, brown skin and small pores.

Like amlas, lemons, and limes, a sour orange cannot be eaten in their raw form—it’s extremely acidic, bitter, and, as its name suggests, sour. Drinking the juice requires adding copious amounts of water and sweetener.

A good source of vitamin C and rich in flavonoids. The flowers and rind of the fresh fruit contain neroli, a volatile oil, a fragrant yellowish liquid with a bitter and aromatic taste. – Juice is a cooling drink, and used as food, particularly for the febrile and scorbutic.

– In the Philippines, the leaves, peel, and flowers are used as stomachic and antiscorbutic.

– Leaves are applied to reduce swelling in the legs. Also used as tonic, pectorals and in bronchitis.

– For nausea and fainting, squeeze rind near nostril for irritant inhalation.

– Dried rind is used as tonic dyspepsia and for general debility; also used to check vomiting.

– Fresh rind is rubbed on the face for acne or eczema.

– Juice used with salt as a ringworm remedy.

– Water distilled from the orange flowers used as stimulant, and as a refreshing drink in nervousness and hysterical cases.

– Used as a stimulant and appetite suppressant

– Bitter orange seeds or pips, first torrefied to remove the husks, taken as a stimulating remedy.

– Oil from the rind is used internally and externally, as a stimulating liniment, for gout and rheumatism.

– Basque in Europe used the leaves for stomachaches, insomnia and palpitations.

-In India, neroli oil, mixed with vaseline, for leech prevention.

– In recent years, Citrus aurantium supplements has been promoted for appetite control.

Since the withdrawal of ephedrine in weight loss formulations, C. aurantium has gained entry as a substitute, and has been reported to aid in weight loss in two studies and increase thermogenesis in three studies. Three studies reported increased metabolic rates when ingesting C. aurantium products, presenting a thermogenic substitute for ephedra.

Study of a methanolic extract of the CA peel showed good antioxdant activity.

The orange essential oil has been attributed sedative and relaxing properties. In the study in rats, the decrease in level of emotionality in animals suggest a possible central action, in agreement with its phytochemical oil yield of limonene and myrcene components with known CNS depressant activity.

A study on the safety and efficacy of the herbal remedy citrus aurantium for weight loss concludes that there was no evidence it is effective for weight loss.

A study investigating the cardiovascular effects of citrus aurantium ingestion, in an herbal blend, on mildly overweight individuals showed that acute ingestion did not lead to increased cardiovascular stress and that fat oxidation increased in certain populations.

Study reports on concerns regarding C. aurantium ingredients in dietary supplements. C. aurantium is marketed as a safe alternative to ephedra in herbal weight loss products. C. aurantium also contains synephrine (oxedrine), structurally similar to epinephrine, which may increase blood pressure. It also contains 6′,7′-dihydroxybergamottin and bergapten, inhibitors of cytochrome P450-3A, that can increase serum levels of many drugs.

• Safety of Citrus aurantium and p-Synephrine

While the potential inherent dangers associated with use of products containing C. aurantium extracts are frequently touted, millions of people consume various juice and food products from Citrus species containing p-synephrine. This study review summarizes information on safety of C. aurantium, and that based on current knowledge, the use of bitter orange extract and p-synephrine appears to be exceedingly safe.

Study investigated the effect of an aqueous extract of flowers on uterine contraction in Wistar rats. Study showed cumulative concentrations of the extract dose-dependently decreased KCl, oxytocin and barium chloride induced uterine contractions. The extract induced antispasmodic effect mainly via calcium influx blockade. Results suggest a potential use of the flowers in the treatment of dysmenorrhea and other uterine spasmodic disorders.

Study investigated the cytotoxic effect of essential oils of Citrus aurantium L. subspamara peels on a colorectal cancer cell line (Lim1863). Results showed limonene and myrcene to be the main components. The essential oil decreased the viability of Lim cell by over 80%. Results suggest a good potential for antitumor effects.

Study evaluated the effect of a hydroalcoholic extract of Citrus flowers on PTZ and maximal electroshock-induced seizures models in mice. Results showed an anticonvulsant effect in PTZ and MES induced seizure models. Effect was attributed to ingredients or synergistic effects of its constituents.

A study find that auricular acupressure at some specific acupoints can significantly improve the absorption of naringenin and hesperetin in the extracts form C. aurantium L. in the human body.

Review summarizes published and unpublished studies on C. aurantium and its primary protoalkaloids p-synephrine. p-synephrine alone or in combination with other herbals did not produce adverse events in heart rate, changes in EKG,BP, serum chemistry and urinalysis; it showed increase resting metabolic rate and energy expenditure, and modest increases in weight loss.

Study evaluated the biologic activity underlying the anxiolytic and antidepressant effects of C. aurantium essential oil. Results showed the anxioytic activity to be mediated by the serotonergic system (5-HT1A receptors).

Study showed C. aurantium can affect the thirst mechanism in rats with effects that are dose-dependent. Further studies on the association of cell signaling pathway related to leptin and Ang II hypothalamic receptors and pharmacology are needed to evaluate its potential in overweight treatment.

• Nephroprotective (protects the kidneys from harm)

Study of C. aurantium against gentamicin induced renal damage showed a nephroprotective role which may be due to its flavonoid contents and antioxidant properties.

Aromatherapy is the use of fragrant essential oils to stimulate the olfactory system and can create a state of calmness and help in alleviate anxiety. Study showed that aromatherapy with C. aurantium blossom oil is a simple, inexpensive, noninvasive, and effective intervention to reduce anxiety during labor.

In a study on Coronary Care Unit patients, aromatherapy with C. aurantium had a meaningful effect on the initiating time of sleep, the sleep longevity, and sleep again after a period of being awake. Results suggest the essence of C aurantium can be used as a sleep remedy for sleep disorders in heart patients.

Caution !
• Herbal Weight Loss Ingredient / Ephedra Substitute / Synephrine / Risks Since the banning of ephedra-containing weight loss products, products containing C. aurantium have surfaced. C. aurantium contains flavonoids and can increase blood levels of drugs (cyclosporine, felodipine, indinavir) with potential drug interactions and attendant side effects. Some extracts and/ or supplements contain high levels of synephrine which may cause increased heart rate and other signs and symptoms associated with increased metabolism.

How to Open or Cut sour orange

For sour orange juice, simply cut the fruit in half and squeeze the fruit. If a commercial juicer is on hand, slice away the rind of the whole fruit using a sharp paring knife, and then drop the fruit in the processor.

Because there are so many medicinal benefits in the rind, use a citrus rinder to make small fine shreds of the peel. Use in baked goods recipes or even atop salads. Or, cut the rind into fine, match stick-sized pieces for the purposes of candying the peel.

Keep sour oranges at room temperature, as they will retain their juiciness best when kept out cool climates. They will keep for two to three weeks. If willing to put in a bit more effort, individually wrap the fruits in newspaper and place in a cardboard box. Store the box in a low-humidity refrigerator with a temperature nearing 40F. These will keep for six to eight weeks. While the fruits will not tolerate freezing, it’s possible to freeze the juice as ice cubes and use as needed. They will keep for six months. Store orange oil in dark-colored glass away from direct sunlight. Keep in a cool location.

– Essential oil from the dried fruit used as food flavoring.

– In Iran, the orange peel used as flavoring for boiled rice and other vegetables.

-Make sour orange salad dressing by including the juice with some olive oil, sesame seeds, soy sauce and coconut oil.

-Instead of making lemonaid, substitute the lemons for sour orange.