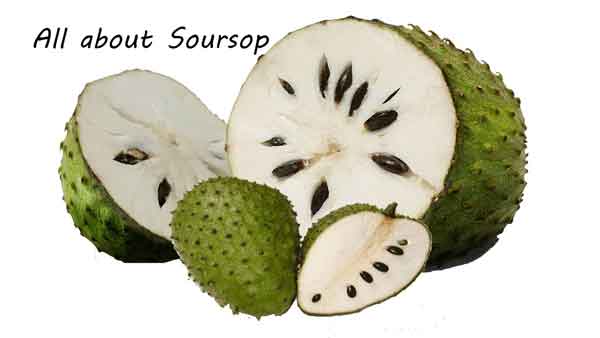 It is is a small tree, usually less than 7 meters high. Fruit is ovoid and large, up to 18 centimeters long, covered with small scattered, soft spinelike processes. Skin is thin, and the pulp is soft, rather fibrous, white, and fleshy, with an agreeable, but rather sour flavor.

How to check for ripeness of Soursop?

Quality soursop yields gently when pressed. The best fruits are picked only when ripe; while slightly immature fruits will grow softer, they will never possess the same robust, complex flavors as truly ripe soursops. Do not be deterred if the plucked soursop’s skin goes from dark green to brown or black—the flesh may still be perfectly edible.

It come in varying sizes and textures: some are the size of a small jackfruit and spiky, while others are the size of an orange and bumpy. Some are delicious when light green; others require a deep greenish-brown color to indicate ripeness. Given these variations, rely on touch as the primary indicator.

Fruit is an excellent source of vitamins B and C. A 100 gm of edible soursop has about 66 calories. It contains · Seeds and green fruit are astringent.

· Infusion of leaves used as sudorific, antispasmodic and emetic.

· In some cultures, the fruits and leaves are used for tranquilizing and sedative properties.

· Juice of ripe fruit used as diuretic and for hematuria and urethritis.

· Flesh of soursop used as poultice to draw out chiggers.

·Decoction of leaves used of head lice and bedbugs.

· Fruit used as a bait in fish traps.

· Decoction of leaves used as compresses for inflammation and swollen feet.

· Poultice of mashed leaves and sap of young leaves used for eczema and skin eruptions.

· Used as tonic by Chinese and Malays.

· In Mexico used as pectoral, antiscorbutic and febrifuge; seeds and green fruit used as astringent and for dysentery.

· In Yucatan juice of the fruit is used for dysentery.

· In Cameroon, leaves used for diabetes.

· In Antiles and Reunion, infusion of leaves used as sudorific.

· In the Peruvian Andes, leaf tea is used for catarrh and crushed seeds for parasitism.

· In the Peruvian Amazon, bark, roots and leaves used for diabetes, as sedative and as antispasmodic.

· In the Brazilian Amazon, the oil of leaves and unripe fruit is mixed with olive oil and used externally for neuralgic, rheumatism and arthritis pains.

· For a good night’s sleep, leaves are put in the pillow slip or strewn in bed.

Study of aqueous extract of soursop has antidiabetic activity. The effect was attributed to its hypolipidemic effect, its antioxidant and protective action of pancreatic ß-cells, which improved glucose metabolism.

Study showed the extract of Annona muricata to inhibit the cytopathic effect of HSV-1 on vero cells indicating an anti-HSV1 potential.

There are much publicized studies on the anti-tumor, anti-cancer and selective toxicity of Annona muricata against several types of cancer cells. One study showed that one of the acetoginins was selectively cytotoxic to colon adenocarcinoma cells, with a potency 10,000 times that of adriamycin.

• Antineoplastic (prevent, inhibit or halt the development of a neoplasm (a tumor))

Study of methanolic extracts of AM on serum lipid profiles in experimentally-induced diabetic Wistar rats showed antihyperlipidemic activities with significant reductions in total cholesterol, LDL and VLDL and a significant increase in HDL and antiatherogenic index.

Graviola may have antidepressive activity due to its ability to stimulate serotonin receptors.

Study evaluated aqueous extract of leaves for toxicity in acute and subchronic models in animals. Results showed no toxic effect in animals’ tissues at low and moderate doses but could cause kidney damage in higher doses. Study also showed antidiabetic effect by lowering of plasma glucose level, with positive effects on cardiovascular risk factors.

In a study aqueous extracts of soursop showed an antibacterial effect against Staphylococcus aureus and V. cholerae. Ethanol extracts showed no activity.

Study evaluated the chemopreventive effects of ethanolic extract of leaves in a two-stage model of skin papillomagenesis induced by DMBA. Results showed tumor growth from the AMLE-treated group showed only slight hyperplasia and absence of keratin pearls and rete ridges, suggesting suppression of tumor initiation as well as tumor promotion.

• Renal Toxicity with Long-Term Use / Leaves

Study investigated ethanolic leaf extracts effects on the level of serum creatinine and damage of tubular cell structure affecting kidney function and caspase-9 expression in glomerulus and tubular cells. Results showed Annona muricata at dose of 10, 20, and 40 mg kbw in saline orally for 40 days caused histological changes in kidney cell and effects on tubular structure leading to renal failure. For long term use, kidney function should be monitored.

Toxicity
· Presence of alkaloids anonaine and anoniine have been reported. The bark yields muricine and muricinine and is high in hydrocyanic acid; small amounts are found in the leaves and roots, and a trace in the fruit.

· Caribbean study suggested a connection between consumption of soursop and atypical forms of Parkinson’s disease due to the very high concentration of Annonacin.

· Graviola may cause movement disorders and myeloneuropathy with symptoms similar to Parkinson’s disease.

How to Open or Cut Soursop

Soursops are easily prepared, as they require little more than cutting in half, taking out the long “heart” in the center (though this chewier part is edible) and slicing the flesh into bite-sized chunks. The leathery green skin isn’t edible, nor are the large, shiny seeds embedded in the fruit. The few seeds and large size makes it easy to remove them.

Soursops keep for up to 7 days at room temperature, and longer if lightly chilled. Chilling the fruit, below 15C, however, is discouraged—the flavor is adversely affected and the skin discolors quickly.

Blend and strain soursop to make a juice

Make ice cream/popsicles by blending the fruit with some nut milk (or coconut milk) and freezing.

Make soursop mousse by using silken tofu as the base. Blend with avocado, mango or passion fruit, and soursop.