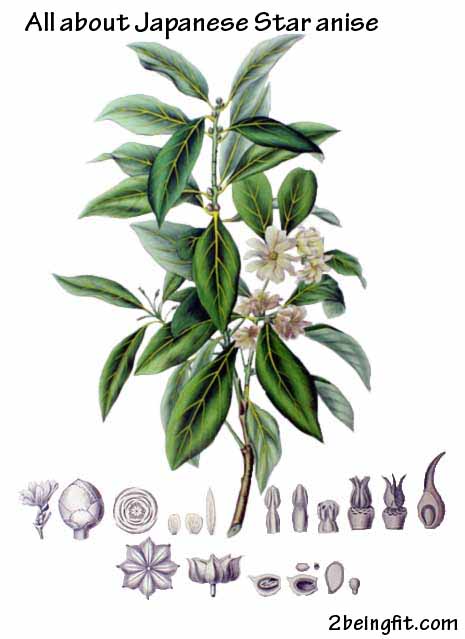 Japanese star anise is an evergreen shrub or small tree growing up to 8 meters high. Leaves are alternate, simple, narrowly ovate or lanced-shaped, 4 to 12 centimeters long, 1.5 to 5 centimeters wide, wedged-shaped at the base, tapering, and blunt at the apex. Flowers are axillary, usually crowded, sometimes solitary, with 12 to 15 perianth lobes, spirally arranged, 3 millimeters wide, pale yellow to white. Carpels are 7 to 9, arranged in a single row or close circle. Fruit is a capsule-like follicetum, 2.5 centimeters in diameter, with an aggregate of 7 to 8 follicles arranged around a central star-shaped axis. Each follicle is boat-shaped and 1-seeded.

– Cultivated in Taiwan and China.

– Similar to I. verum, but the fruit is smaller with a weaker odor, more similar to cardamon than to anise.

– The taste and color are quite distinct; the Japanese star-anise having a balsamic, but not anise like color, and a disagreeable taste.

– In China, the powdered fruits are considered stimulant and carminative.

– Fruit of specie Illicium religiosum is considered very toxic. Reports of toxicity from use of fruit decoction have been reported.

– According to some studies, all parts of the plant is considered poisonous.

– Although Chinese star anise is considered safe for consumption, the species also contain toxic compounds – veranisatins A, B and C. Although the veranisatins are not as potent as anisatin of the Japanese star anise, neurologic symptoms are observed at higher doses.

– (Some compilations have confused the true star-anise (Illicium verum) and the poisonous kin (Illicium anisatum), and included in their synonyms two endemic species (Illicium montanum and Illicium philippinense).

– Chinese star anise (Illicium verum Hook F.) is the well-known spice used in many cultures, used in the treatment of infant colic, and is commonly known to be safe and non-toxic. Japanese star-anise has been documented to have both neurologic and gastrointestinal toxicities attributed to its sesquiterpene anisatin.

In China, the poisonous star-anise is used as local application in the treatment of toothache and certain forms of dermatitis and parasitism. The volatile oil is used for colics in children.

Study showed essential oil of Illicium anisatum may be considered an anti-aging and anti-inflammatory candidate for cosmetic materials, pending additional studies for safety and efficacy. EIA exhibited moderate DPPH scavenging and anti-elastase activities, with effective inhibition of LPS-induced NO and PGE2 production in RAW 264.7 cells.

Extract of Illicium anisatum has been shown to increase subcutaneous blood flow in mice. In the study, follicles treated with water-soluble extract of leaves, fruits and roots of IA or shikimic acid grew significantly longer than controls. Results suggest the WS extract of IA promotes hair growth and may be a useful additive in hair growth products.

The well known spice Illicium verum Hook has been reportedly adulterated with toxic Japanese star anise. A molecular method detects and distinguishes between I. anisatum and other Illicium species in powdered samples.

Analysis of essential oil by gas-liquid chromatography showed the major constituents to be cineole 18.1%, linalool 10.1%, methyleugenol 9.8%, a-terpenyl acetate 6.8%, safrole 6.6%, and a sesquiterpene of unknown constitution 7.2%. The composition significantly differs from that of commercially used star anise oil from Illicium verum which has an anethol content of 88% compared to 1.2% in Illicium anisatum. (7)