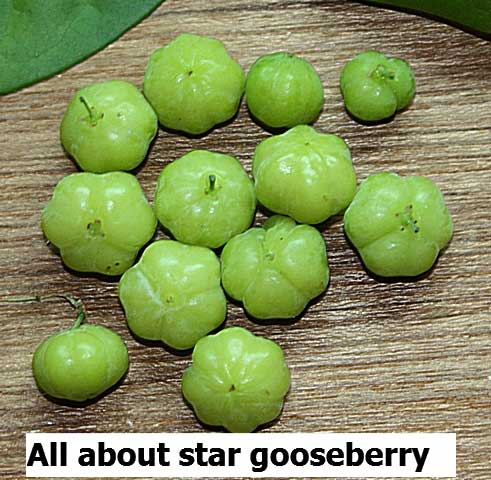 It is a small, smooth, deciduous tree growing to a height of 4 to 9 meters. Fruit is fleshy, acidic, edible, greenish white, rounded, 1 to 1.5 centimeters diameter, angled, with a hard, bony, 6- to 8-grooved, 3- or 4-celled stone, each cell with a single seed. It is distrubuted widely in many places from India to Malaya, Polynesia, Puerto Rico (where the fruit is called grosella), Ecuador, El Salvador, Mexico, Colombia, Venezuela, Surinam, Peru, Brazil and America.

The taste of  raw star gooseberries can be pungent, overwhelmingly sour and astringent. The flesh is juicy, watery, crisp and densely compact, not unlike the texture of amla. Use caution when eating, as the seed is rock hard which is present in the middle of the fruit.

How to check ripeness of Star Gooseberry?

Unripe gooseberries appear whitish green and are hard to the touch. As they ripen on the vine, they turn pale gold. The fruits do not ripen further once plucked from the tree, and are therefore harvested once they begin to drop. The fruit is acid and astringent, root is purgative and seed is cathartic. Leaves are diaphoretic, mucilaginous and demulcent.

It is widely used traditionally in the treatment of several pain, inflammatory and oxidative stress related disorders such as rheumatism, bronchitis, asthma, respiratory disorder, hepatic disease, diabetes and gonorrhoea. The plant is also important to improve eyesight, memory and to cure cough, psoriasis, skin disorders, sudorific. Fruits of the plant used as astringent, root and seed are useful as cathartic, leaf and root use as antidote to viper venom. The leaf of the plant found effective in hypertension. Leaf, bark and roots are used to treat fever traditionally. The latex of the plant credited with purgative and emetic activity.

Decoction of leaves is used externally for urticaria, the fruit given at the same time to eat.

Decoction of the bark used for bronchial catarrh.

Some believe the roots to be poisonous, but the Malays boil it for steam inhalation in use for coughs.

In Borneo, used with pepper
– Poultice of leaves for lumbago and sciatica.
– Root used for psoriasis.
– Used in chronic liver diseases.
– Decoction of leaves is diaphoretic.
– Leaves used for gonorrhea.

In Indonesia, leaves are used as counterirritant in sciatica and lumbago.

In Malaysia, vapors from boiling of roots inhaled for coughs and headache.

In Bangladesh  used for skin diseases – eczema, abscesses, acne, etc.
In India , fruits are taken as liver tonic. Leaves, with pepper, are poulticed for sciatica, lumbago or rheumatism. Leaves taken as demulcent for gonorrhea.
In Maharashtra, India , decoction of seeds used twice daily for asthma and bronchitis.

In Malaya , root infusion, in small doses, taken for asthma. The root is used for foot psoriasis.

Medical Medium: Secrets Behind Chronic and Mystery Illness and How to Finally Heal (Revised and Expanded Edition)

A study has shown that gooseberry plant extracts may provide treatment against cystic fibrosis of the lungs.

A study indicate that goose berry has antibacterial activity that has shown effective against many infections.

Another study has shown that it has strong antinematodal activity, that  helps to fight against nematode infection.

According to a study, the leaves of star gooseberries are rich flavonoids and phenolic compounds, that has analgesic, anti-inflammatory and antioxidant activites. It is helpful in reducing pain, inflammation and oxidative stress.

A study has shown that it’s leaves has diuretic potential, that helps to promote production of urine, elimination of excess water and salts from the body.

Another study has shown that the root bark of star gooseberry plant has antioxidant potential.

A study has shown that the leaf of star goose berry are rich in many phytochemicals that has anti-microbial effect.

A study has shown that the fruit of star goose berry helps to protect liver against injuries and oxidative stress damage, due to it’s antioxidant and free radical-scavenging potentials.

A study has shown that the leaf extracts of star goose berry plant has anti-tumor and helps to kill cancer cells.

In a study, the extracts of star goose berry has shown antimicrobial and anti-tubercular properties.

Another study has found that the star gooseberry is effective in many respiratory conditions including pneumonia.

A study has shown that the boiled extracts of this herbal extract helps to enhance phagocytic cell function and inhibit platelet aggregation.

Avoid using the juice of the root-bark as it can act as poison, which produce headache, sleepiness, and abdominal pain.

Unripe fruit is cooked and used as a sour flavoring.

Young leaves are cooked as greens.

Add these fruit into the curries and chutneys.

Star gooseberry  are also used to make sauces as it helps to thicken it.

To reduce is acidity, star gooseberries can be soaked overnight in salt water.