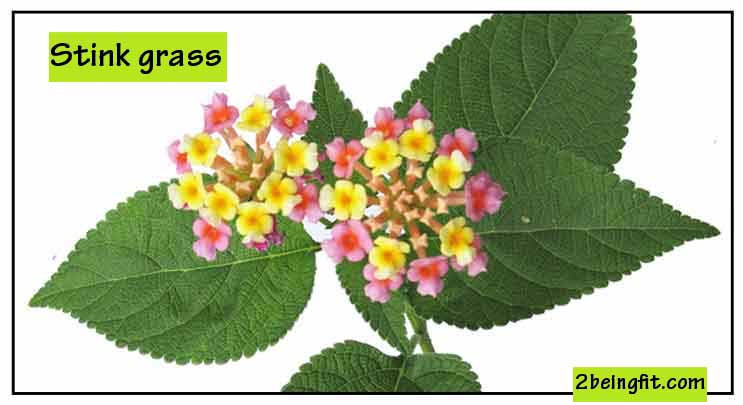 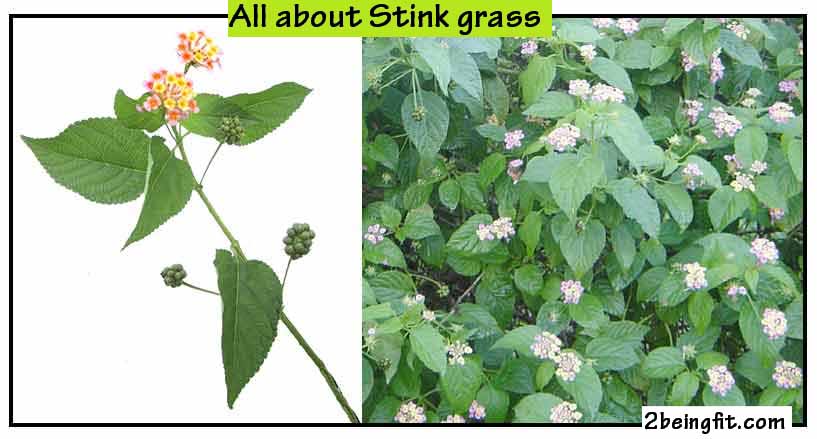 The scientific name of the stink grass is Lantana camara.

• There are 40 species of the genus Lantana.

• Some are extremely unpleasant and toxic to livestock, as is L. camara.

• In some countries, considered an invasive weed, earning the name, “Jekyll and Hyde of plants.” It releases chemicals in its surroundings, preventing germination of the native flora. It is wont to form dense thickets, spreads very quickly, with one plant producing as many as 12,000 seeds a year.

· Lantana is a gregarious, erect or half-climbing, somewhat hairy aromatic shrub; when erect, usually 1 to 2 meters high and when scandent, twice as high. Branches four-sided with recurved prickles. Leaves are elliptic, 5 to 9 centimeters long,3 inches long, pointed at the tip and rounded at the base and toothed in the margins. Flowers are pink, orange, yellow, white, lilac and other shades, according to the variety and borne in stalked heads which are 2 to 3.5 centimeters in diameter. Calyx small. Corolla-tube is slender; the limb spreading, 6 to 7 millimeters wide, and divided into unequal lobes. Stamens 4, in 2 pairs. Ovary is 2-celled, 2-ovuled. Fruit is drupaceous, sweet tasting, purple or black, fleshy ovoid, and about 5 millimeters long.

– A gregarious weed in the many parts of the world, in settled areas in thickets and waste places at low and medium altitudes.

– Certain varieties are cultivated as a trimmed hedge either alone or with other shrubs.

· Leaves yield a volatile oil, 0.22%, called Lantanol, together with 80% caryophyllene-like bicyclic terpene, and 10-12 % of l-d-phellandrene.

· Toxicity is due to presence of toxic triterpenoids – the lantadenes (lantadene A, B, C, D and icterogenin.)

· Leaves contain a steroid, lancamarone, which is a fish poison and considered a cardiotonic.

· Bark of stems and roots contain a quinine-like alkaloid, lantanin, which is antipyretic and antispasmodic.·

· Roots are rich in oleanolic acid, a hepatoprotective triterpenoid.

· Phytochemical analysis detected common secondary metabolites–alkaloids, phenolics, terpenoids and other minor compounds such as phytosterols, saponins, tannins, phycobatannin and steroids (no steroids in the yellow and lavender leaf extracts).

· Lantinine considered antipyretic and a good substitute for quinine.

· Phytochemical analysis detected common secondary metabolites–alkaloids, phenolics, terpenoids and other minor compounds such as phytosterols, saponins, tannins, phycobatannin and steroids (no steroids in the yellow and lavender leaf extracts).

· May be collected throughout the year.

· Fruit is eaten in Malay and Sierra Leone.

· In some parts of India, leaves used as tea substitute.

· In the Philippines, decoction of fresh roots used as gargle for toothaches, and a decoction of the leaves and fruits to clean wounds.

· Decoction or syrup of roots (in sugared water) used for asthma.

· In Sinaloa, plant used for snake bites. Strong decoction of leaves taken internally and poultice of wounds applied to the wound.

· Fever: Take decoction of bark or infusion of leaves and flowering tops as tea.

· Hemoptysis, pulmonary tuberculosis: use 6 to 9 gms dried flowers in decoction.

· Decoction of fresh leaves used as gargle for toothaches.

· In Java, leaves applied to swellings; also used as lotion or fomentation for rheumatism.

· In West Africa, an aromatic infusion of the leaves and flowering tops, sometimes mixed with Ocimum, is used as febrifuge and diaphoretic.

· In Uganda, used to treat symptoms of tuberculosis.

· Infusion of leaves used for bilious fevers and catarrhal affections.

· Infusion of flowers used as pectoral for children.

· Tincture of bark used as tonic.

· Pounded leaves used as antiseptic for cuts, ulcers and swelling.

· Decoction of leaves and fruits used for wounds.

· In Taiping, toothbrushes are made from the stems.

Scientific studies on the benefits and uses of stink grass

• Antimotility / alleviate the symptoms of diarrhea:

Pentacyclic triterpenoids are being studied for anti-cancer, antiinflammatory and antimicrobial activities.

Oleanolic and ursolic acids from the stems, roots and leaves have application for human liver disorders, also as antihyperlipidemic and anti-tumor.

In a pre-clinical study evaluating the wound healing activity of Lantana camara L. results showed LC is effective in healing excision wounds in the experimental animal and suggests further evaluation as a therapeutic agent in tissue repair processes associated with injuries.

In a study for cytotoxic activity of Lantana camara Linn. results showed the leaf extract of LC is cytotoxic in nature and may possess antitumor activity that may be due to the presence of toxic lantanoids and alkaloids.

Study of the leaves and flowers of four Lantana camara plants with yellow, red, lavender and white flowers showed three of the four to have similar carbohydrates and lipid compositions. The carbohydrate levels were higher in the flowers than the leaves, and the lipids higher in the leaves except for the lavender- and white-flowered kinds. The carbo in lavender L camara was very low. Leaf protein electrophoresis also showed similarities and differences. Antibacterial activities varied according to the type of tissue used.

Phytochemical screening of leaves and flowers yielded saponin, terpenoids, flavonoids and cardiac glycosides. Phytol, a diterpene, is present in higher concentration in the methanol leaf extract of Lantana camara. The larvicidal activity noted was attributed to the phytochemicals and results suggests the shrub may have a potential in the control of vector borne diseases.

Study on extracts of root, stem, leaf, flower and fruit of L. camara on a panel of organisms that included 10 bacterial and 5 fungi showed the leaf extract to have the highest antibiotic effect among all parts especially against Gram positive Bacillus cereus and Gram negative Salmonella typhi. Results support the use of the leaf extract in some infectious gastroenteritic disorders.

Study investigated the toxicity of methanol extract of various parts (root, stem, leaf, flower, and fruit) in Artemia salina. Results showed all tested extracts exhibited very low toxicity in brine shrimp larva. The root extract was the most toxic part of the plant and may have a potential as an anticancer agent. Study concludes L. camara is relatively safe on short-term exposure.

Study of methanolic extract of Lantana camara against neostigmine as promotility agent showed an anticholinergic effect due to Lc constituents. Results suggests a utility in secretory and functional diarrhea and other GI disorders. Further study showed significant inhibition of castor-oil induced diarrhea in mice.

Study evaluated various extracts of leaves, stems and roots for anthelmintic activity against Pheretima posthuma. Results showed the methanolic extract of stems to be most active.

Study evaluated the potential of L. camara, a forest waste, as an adsorbent for phenol reduction in wastewater. The adsorption process is feasible, spontaneous and exothermic in nature. Results enhanced the credibility of the forest waste as one of the most suitable precursors for adsorbent preparation for pollutant removal.

Study reports on the Lantana camara leaf mediated green synthesis of gold nanoparticles. The method is simple, cost-effective and non-toxic in nature. The synthesized AuNPs were utilized as catalyst for the sodium borohydride reduction of 4-nitrophenol to 4-aminophenol.

Study evaluated the a methanol leaf extract for toxicity. On acute toxicity test of extracts on mice, there was no toxicity up to 5000 mg/kbw. Study showed a level of toxicity at chronic stage (beyond two weeks of extract administration). Results seriously caution extended use of the medicinal plant to avoid hepatic and renal biochemical distortion.

Study evaluated the antagonistic effect of water and organic solvents of L. camara extracts against 15 pathogenic strains of bacteria. Bacterial strains whose growth were inhibited by water solvent could not be inhibited by organic solvent extracts. Both solvent extracts showed high antibacterial effect towards Staph aureus, Staphylococcus sp. and Pseudomonas aeruginosa.

Study investigated the antihyperglycemic and wound healing activity of leaf extracts of Lantana camara on rats. An aqueous extract showed significant reduction of blood glucose. In wound healing studies, the leaf juice was found to be more active than the extract. However, study cautions on the use of the plant for diabetes until the alarming toxic principles of the plant are properly identified.

Study showed that kantutay leaves (Lantana camara) crude extract was effective in reducing the defecation frequency of male white mice. Results was attributed to an antimotility component in the extract.

• Most of the livestock poisoning occur on grazing after prolonged stall feeding and during fodder scarcity or draught periods.

• Toxicity: Toxic chemical constituents are toxic terpenoids: lantadene A, B, C and D, and icterogenin. Lantadene A,B and C constitute nearly 69% of total terpenoids. Triterpenoids are most rapidly absorbed from the small intestine, but slow absorption from and stasis in the rumen causes slow and continuous exposure of the liver that lasts for days.

• Ingestion of lantana foliage causes decreased luminal motility that may progress to ruminal atony and cause constipation and impaction as the animals become anorectic and unable to defecate.

• Sometimes, the afflicted animals present with photosensitization with swollen ears and eyelids.

• Ingestion of Berries by Children / No Significant Toxicity:

Study reviewed the California Poison Control System database on 641 reported pediatric cases of ingestion of L. camara berries from 1997-2008. Reported effects were vomiting, abdominal pain, agitation, diarrhea, buccal irritation, tachycardia, drowsiness, nausea and mydriasis. No significant effects and no deaths were recorded. Report concludes the ingestion of L. camara (including unripe berries) was not associated with significant toxicity. The ingestion of unripe berries did not exhibit more frequent or more severe symptoms than ingestion of ripe berries or other plant parts. Children with asymptomatic ingestions or mild symptoms can be treated at home.

* Accidental Poisoning of Ostriches that Fed on L. camara Hay:

Letter reports an unusual case of poisoning from ingestion of L. camara by a flock of 14-month old ostriches. The report cautions farmers to prevent the encroachment of the plant onto pasture land where grass is cut and collected for purpose of making hay.