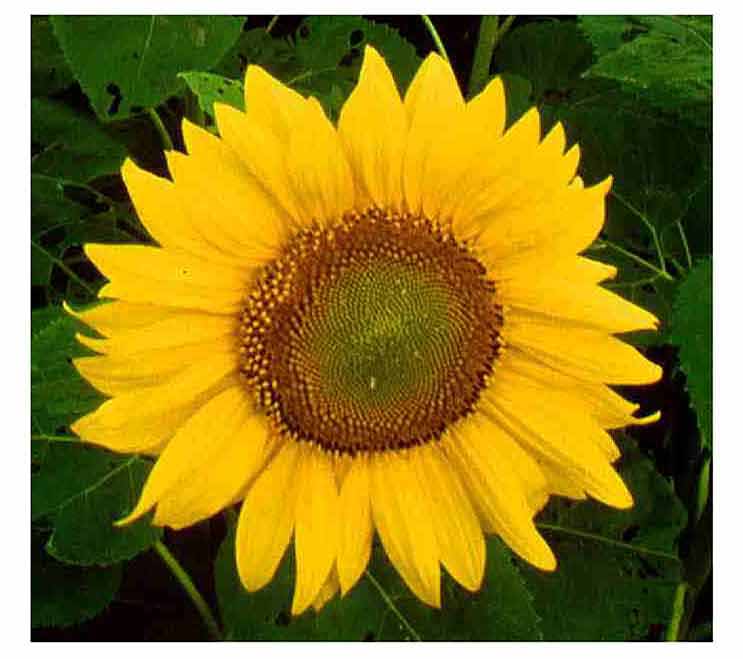 Sunflower is a coarse, stout and erect annual plant, up to 1 to 3 meters high. Stems are straight, rarely branched. Leaves are opposite at the lower part of the stem, alternate above, ovate, rough, hairy, with toothed margins, long-stalked, 10 to 25 centimeters long. Lower leaves are somewhat heart-shaped. Flower heads are solitary or in clusters, up to 40 centimeters across. Disk flowers are yellow to brown, with tubular, 5-limbed corolla. Ray flowers are yellow and spreading. Involucral bracts are ovate or oblong.

– Cultivated for ornamental purposes and for its seeds.

– Profuse seasonal growth in certain places, like the Mountain Province.

– Planted in all warm countries.

– Seeds, raw or cooked; difficult to use because of small size.

– The oil is low in cholesterol, considered olive-oil quality and used for salads and cooking.

– Disk of the flower-head can be eaten like an artichoke.

– Boiled flower heads once used by Amerindians for pulmonary affections.

– For whooping cough, an infusion of the brown seeds, drink the tea 4 to 5 times daily.

– For asthma, an infusion of the leaves.

– Decoction of seeds used as diuretic and expectorant; used for bronchial and pulmonary affections, coughs and colds.

– An infusion of oven-browned seeds used for whooping cough.

– For diabetes, tea from decocted roots (10 gms to half a glass of water).

– When flowers and leaves are mixed with oil, let stand for 5-10 days before using.

– Seeds are diuretic, used to increase the flow of urine.

– Tincture of flowers and leaves mixed with balsamics used for bronchiectasis.

– In China, seeds used for dysentery.

– Tincture prepared from seeds, rectified with wine, used for fevers and ague, in lieu of quinine.

– In Brazil, leaves used as substitute for Datura stramonium for treatment of asthma.

– Infusion of roots used for diabetes.

– Tincture of bark and flowers employed for intermittent fevers resistent to quinine.

– A purple dye is obtained from some varieties.

– Outer part of the stem has a little fiber, when freed from the pith can be made into paper.

– Seeds are used for bird food.

Scientific studies on the benefits and uses of sunflower

Antimicrobial activity of some medicinal plants against some Gram positive, Gram negative and fungi: Study showed the methanol extracts of HA showed low activity against B subtilis and pronounced activity against Proteus vulgaris.

Study of the aqueous extract of Helianthus annuus seed on an in vivo anti-asthmatic model showed a decrease of CD4 cells, IL-4/IL-13 expression and IgE secretion levels in the lung. Results suggest the HAS extract has considerable potential in reducing asthma-like symptoms in a mouse model and suggests further purification of the extract to determine the factors responsible for antiasthmatic activity.

Study showed that sunflower pollen has high allergenic potential, especially with close contact, as in workplace exposure which can result in impairment of lung function.

Study showed high antioxidant capacity in the aqueous extract of the sunflower seed and suggests a potential for preventing in vivo oxidative reactions involved in diseases, such as cancer.

In a study of four edible sprouts in Chinese markets, the sunflower sprout H. annuus exhibited the strongest inhibitory effects against the formation of glycation end products. The antioxidant capacity of H. annuus was much stronger than the other samples. Study yielded cynarin (1,5-dicaffeoylquinic acid), an active ingredient with a novel function of intervening against glycooxidation. Results suggest sunflower sprouts of H. annuus may have benefits as food supplement in diabetic patients.

• Effect of Caffeine on Growth:

Study showed caffeine in its lower doses has a stimulatory effect on growth and yield while higher doses have inhibitory effect and reduce the growth.

Study of an ethanolic extract of seeds in STZ-induced T2 diabetic rats showed the potential antidiabetic property. Chlorogenic acid in seeds is reported to have an antidiabetic effect.

Study showed cadmium exposure induces the formation of phytochelatins in root tissues and leaves. Phytochelatins may play an important role in removing heavy metals from polluted environments and bioremediation.