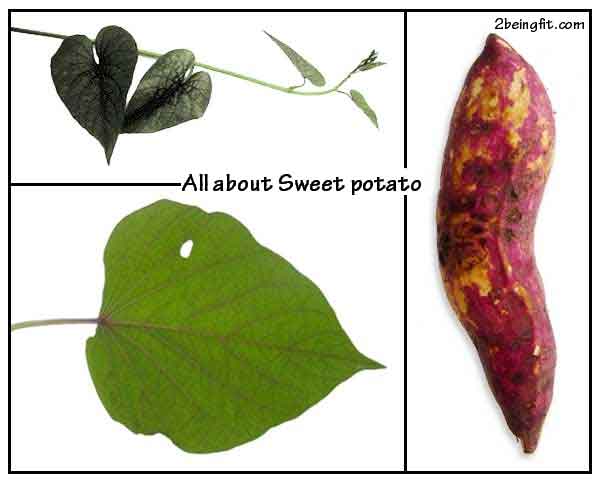 The scientific name of the sweet potato is Ipomoea batatas Lam. Other names include

Sweet potato is a spreading, prostrate, herbaceous, smooth or somewhat hairy vine. Stems or runners, sprawling several meters long, take root when in contact with soil. Leaves are ovate to oblong-ovate, 6 to 14 centimeters long, somewhat entire, with alternate heart-shaped or palmately lobed leaves, pointed at the tip, and heart-shaped at the base. Flowers are sympetalous like that of morning glory, 5 centimeters long, funnel-shaped, purple, self sterile, and rarely producing seeds. Stamens are 5, of different lengths attached to corolla (epipetalous) with hairy filaments. Sepals are about 1 centimeter long and greenish with pointed lobes. Corolla is funnel shaped, 4 to 5 centimeters long, pink, purple, and whitish. The edible and sweet-tasting tuberous root is long and tapered with a smooth skin of varying colors from red, purple, brown and white. The flesh varies from white, orange, purple and yellow.

It can be planted any time of the year and cultivated in all warm countries. It is easily propagated from stem cuttings.

• Leaves have a high content of polyphenolics – anthocyanins and phenolic acids, with at least 15 biologically active anthocyanins with medicinal value.

– Leaves and roots are edible.

– Has a higher nutritional value than the common potato.

– Good source of vitamins A, B and C, iron, calcium and phosphorus.

– High in complex carbohydrates and dietary fiber; deficient in protein.

– A component of many traditional cuisines.

– A staple food crop in some countries.

– In Southwest Nigeria, hot water infusion of the whole plant used in the management of diabetes mellitus.

• Dengue: Like gatas-gatas (Euphorbia hirta), there have been anecdotal reports of the use of Ipomoea batatas in dengue, with improvement in platelet counts being attributed to decoctions of kamote tops.

Preparation: Sweet potato tops are boiled in water for 5 minutes to extract the juice

Despite its “sweet” name, it may be beneficial for diabetes as some studies suggest it may stabilize blood sugars and lower insulin resistance.

Study showed the flavone extracted from IB leaf could control blood sugar and modulate the metabolism of glucose and blood lipid, and decrease outputs of lipid peroxidation and scavenge the free radicals in non-insulin dependent diabetic rats.
• Hematologic / Hemostatic:

Hemostatic mixture of ipomoea balatas leaves, methods of preparation and use thereof — a Jinshuye styptic plant preparation, an invention made from the extracts of leaf and stems of Ipomoea batatas has qi and spleen invigorating effects, cooling the blood and stopping bleeding. Such a composition has the potential of use for ITP (idiopathic thrombocytopenic purpura), radiotherapy- and chemotherapy-induced thrombocytopenia.

Purple Sweet Potato anthocyanins have antioxidative activity in vivo as well as in vitro.

Study to isolate the antidiabetic component of white-skinned sweet potato suggested the active component to be an acidic glycoprotein because it contained a protein and sugar and adsorbed onto the QA column at pH 7.0.

Study confirmed the beneficial effects of Caiapo (a neutraceutical) on plasma glucose with a decrease in Hb A1c, as well as cholesterol levels, in type 2 diabetes patients.

Mucilage might contribute its antioxidant activities against both hydoxyl and peroxyl radicals.

Study identified new chitinolytic enzymes in sweet potato leaves. Chitinases catalyze the hydrolysis of chitin, the main structural component of fungal walls and arthropod integuments. Studies suggest it has other functions and has been proposed to play a role in the defense against pathogens. Chitinases are also useful in the production of biomedical and biotech products; used in the production of chitooligosaccharides, glucosamines and GlcNAc. Other applications are found in mosquito control and pathogenic plant fungi control.

Study demonstrated that the phytochemicals in sweet potato may have significant antioxidant and anticancer activities. The antioxidant activity was directly related to the total amount of phenolics and flavonoids in the extracts. The additive roles of phytochemicals may contribute to its ability in inhibiting tumor cell proliferation in vitro.

Study confirms the beneficial effects of Caiapo on glucose and HbA1c in T2DM. The improvement in insulin sensitivity was accompanied by increased levels of adiponectin and a decrease in fibrinogen.

• Effects on Glucose and LDL in Type2 Diabetes / Antiproliferative:

Pilot study showed a beneficial effect of high-dose caiapo on plasma glucose and LDL cholesterol levels in patients with type 2 diabetes the effect was attributed.

Study showed the carotenoids extraction process retained most of the antioxidant capacity from the leaves. It is also a potential source of natural yellow dye with antioxidant property that can be beneficial to human health, as an alternative to the artificial coloring dye currently used in the market.

Study showed Ipomoea batatas Poir Cv anthocyanins could have an inhibitory effect on transplantation tumor of mice, with no toxicity and no mutation.

In an incision wound model, high tensile strength of the wounded skin was noted in animals treated with peel extract gels and the peel bandage when compared to controls. There was also significant wound closure by the 4th day, a significant increase in hydroxyproline and ascorbic acid and decrease in malondialdehyde content. The wound healing activity was attributed to possible underlying antioxidant mechanism.

In a study on hypoglycemic effects of cooked and uncooked methanol and aqueous extracts of sweet potato tuber, results showed the active principles responsible for the antihyperglycemic effect are concentrated in the methanolic extract and aqueous suspension of the uncooked tuber.

Study investigated the effect of a leaf extract on the thyroid gonadal axis of male rats. Results showed follicles hypertrophy and hyperplasia and reduction of colloid in the follicular lumen. Testes morphology showed oligospermia, asthenospermia and abnormal sperm morphology. Results suggest a male contraceptive property of the plant extract, the mechanism possibly as both a direct effect on the gonads of indirectly via the hypothalamo-hypophyseal axis.

• Mode of Action in Type 2 Diabetes:

Study evaluated the effect of aqueous extract of Ipomoea batatas on food intake, fasting blood glucose and body weight in male wistar rats. Results showed reduction in food intake probably by increasing satiety and reduction in weight gain by using up the body’s reserve of fat as a result of low blood glucose.

Study evaluated levels of some nutrients and antinutrients of sweet potato leaves. Results showed leaves contain an appreciable amount of proteins, minerals, fat, fibre, carbohydrate, caloric values (energy) and low levels of toxicants except for oxalate whose value is reduced by cooking. Results suggest leaves can contribute significantly to nutrient requirements of man.

Study evaluating six leafy varieties of Ipomoea batatas showed the presence of total flavonoids, total phenolics, reducing activity, and the ability to scavenge free radicals, and suggest leaves can be used as a potential source of natural antioxidants.

• In Vitro Cytotoxic and Antioxidant Activity:

• Effects on Hematological and Biochemical Parameters:

Study evaluated a postprandial glucose suppression effect of diacylated anthocyanin with α-glucosidase (AGH) inhibitory activity in Sprague−Dawley rats. Results showed the anti-hyperglycemic effect of the anthocyanin was achieved by maltase inhibition, not by sucrase or glucose transport inhibition at the intestinal membrane.

Study showed sweet potato starch could be used up to 4% inclusion in meat products, to minimized formulation costs and consumer concerns about excessive used of chemical ingredients in meat products.

• Effect on Malondialdehyde and Nitrous Oxide Levels in Smokers:

Cigarette smoke is an exogenous source of free radicals containing more than 400 chemical compounds triggering the formation of free radicals associated with disease and the aging process. Study evaluated the effect of I. batatas as a source of antioxidants that decrease malondialdehyde (MDA) and increase nitrous oxide (NO) in plasma of moderate smokers. There was a decrease in MDA and increase in NOx plasma levels in the treatment groups. Study suggests IB syrup contains 8 mg/mL anthocyanins, which probably play a role in reducing free radicals and provide benefits in reducing risk of disease and slowing the aging process.

Study evaluated the antisickling activity of Ipomoea batatas leaves through an in vivo bioassay. Results showed an antisickling effect, partly attributed to anthocyanins.

Study evaluated the protective effects of purple sweet potato extract in stimulated BV-2 microglial cells and its anti-oxidant properties. Results showed IBE attenuated neuroinflammatory responses in LPS-activated BV-2 microglia by inhibiting excessive production of pro-inflammatory mediators such as NO, iNOS, COX-2 and TNF-α. The effect can be related to its strong antioxidant properties.