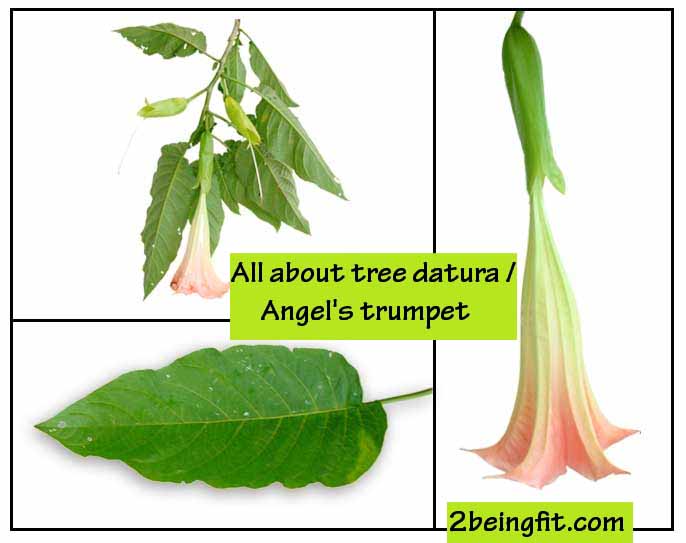 The scientific name of the tree datura is Datura arborea.

Tree datura is a small tree or large shrub growing to a height of 3 meters or more. Leaves are simple, opposite, ovate-lanceolate, 13 to 18 centimeters long, 6 to 8 centimeters wide, with pointed tips, unequal, obtuse or rounded bases, with entire or hairy margins. Flowers are large and showy, about 20 centimeters long, creamy white, pendulous, and musk-like in odor. Calyx is tubular, entire and spathelike. Corolla tube is cylindrical with very big lobes.

– Occasional in the lowlands.

– Native of Peru and Chile.

– Flowers, leaves, stems and roots contain scopolamine and some hyoscyamine.

– The roots have some atropine and a little hyoscyamine.

– The stem has much hyocyamine and a little scopolamine.

– The leaves contain scopolamine, 0.44% , and an alkaloid, floripondine.

– In Peru, Chile, and other parts of South America, a poultice of leaves is applied externally to accelerate the suppuration of boils and to relieve pain.

– Plant used for belladonna if given in double or treble dosing.

– In the Ecuadorian Amazon, the stems and branches, cut longitudinally are applied to the head or painful body part, bandaged to the area for 15 minutes. (see study)

– In Peru, leaves are used to treat tumors and alleviate fevers.

– In the Ecuadorian Amazon, used as hallucinogenic; used by shamans for bewitching and curing. Brugmansia overdose may result in delirium that lasts for days. Side effects have been known to last for weeks after consumption

– Dried leaves may be smoked alone or mixed with tobacco or Cannabis indica. (see study)

– All plant parts are potentially poisonous, especially the seeds and leaves.

– Plant has been used as hallucinogen and intoxicant from the hyocyamine content.

– The chief alkaloids found in datura are atropine, hyoscyamine, hyoscine (scopolamine) and meteloidine. Poisoning can occur with overdose of any of the alkaloids. As little as 4 grams of leaf can be fatal to a child; alas, as the child’s curiosity is drawn to the plants large flowers and spiny seed capsules.

– Appearance of alkaloid toxicity can be within minutes to hours, depending on concentration, method of ingestion and dosing, manifesting as: extreme thirst, pupil dilatation, vision impairment and hallucinations. High temperature, flushed skin and palpitations may be observed. In non-fatal cases, signs and symptoms subside in 12 to 48 hours, although visual impairment and lethargy may persist for some time.

Scientific studies on benefits and uses of the tree datura

The D. arborea ferredoxin exhibited three or four differences in the amino acid sequence when compared with D stramonium and D metel. The result supports the idea propounded by Bernhardi and Safford that ‘Tree Datura” such as D arborea should be a section of the genus Datura and not a separate genus.

Crude extract of leaves showed moderate antiamoebic activity at MIC of 125 ug/ml. The activity was not due to its alkaloid contents because atropine and scopolamine were inactive in vitro against E histolytica.

• Effect of Secondary Metabolites on Morphine Tolerance and Dependence:

Study evaluated the in vivo effect of Brugmansia arborea extract, fractions, and isolated alkaloids on expression and acquisition of morphine tolerance and dependence. The extract significantly reduced the expression of morphine tolerance but was ineffective in modulating its acquisition. The extract, fraction, and pure alkaloids significantly attenuated both development and epression of morphine dependence. Results suggest potential therapeutic application in the treatment of opioid addiction.

• Effect of Secondary Metabolites on Morphine Tolerance and Dependence:

Study evaluated a methanol extract on the motor and reinforcing effects of morphine and cocaine. Results showed B. arborea blocked cocaine-induced hyperactivity but did not block cocaine-induced CPP (conditioned play preference). The dopaminergic and cholinergic systems may have provided a neurobiological substrate for the effects observed. Results suggest B. arborea as a useful tool for the treatment of morphine or cocaine abuse.

Study evaluated the affinity and the selectivity of V. adscendens, Iresine herbstii Hook and Brugmansia arborea (L.) Lagerheim towards 5-HT1A, 5-HT2A, 5-HT2C serotononergic, D1 and D2 dopaminergic, α1 and α2 adrenergic receptors by radioligand assays. The B. arborea aqueous extract displayed weak affinity for all receptors tested. The highest levels of inhibition at the maximum concentration tested (125 μg/ml) were 38% for the 5-HT1A , 16% for the 5-HT2A and 39% for the 5-HT2C receptor.