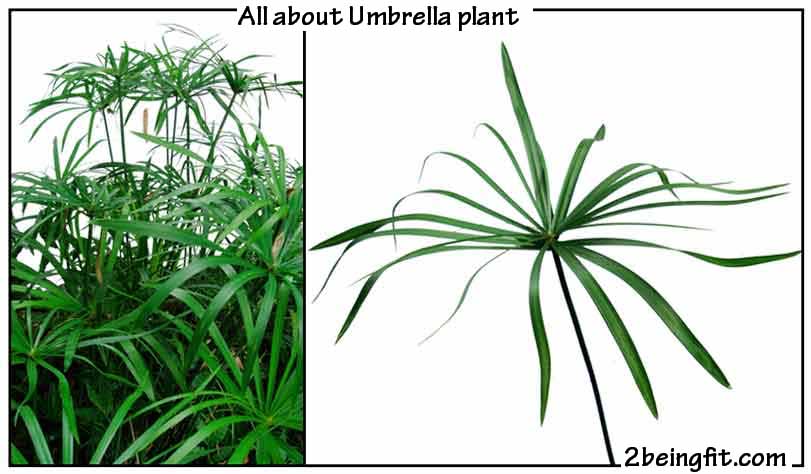 The scientific name of the umbrella palm / plant is Cyperus alternifolius Linn.

Cyperus alternifolius is a clustering perennial growing to a height of 1.5 meters. Stems are cylindric, ribbed, smooth and green. Leaves are linear, radiating from the terminal point of stem, spreading or slightly drooping, up to 20 centimeters long. Flowers are small, green and clustered.

– Widely distributed around the world, in canals, ponds, and riversides.

– Occasionally planted as an ornamental.

– Naturalized in many tropical areas worldwide.

– Study of hydrodistilled volatile oil of flowers yielded 40 compounds representing about 98% of the oil. Sesquiterpenes constituted the bulk of the oil (ca. 62%); major components were α-cyperone 19.6%, ß-selinene 9.8%, caryophyllene oxide 7.2%, and cyperene 5.2%. (see study)

Scientific study about benefits, uses of umbrella plant or palm

Study of root and leaf extracts of Cyperus alternifolius showed moderate activity against all yeast tested, while the root extract showed a clear antioxidant activity. It showed strong activity against both sensitive and resistant S aureus strains and against E faecalis.

Study evaluated the ability of Cyperus alternifolius to remove pollutant in sludge through constructed wetland. Results showed that in general CA can treat industrial sludge with high efficiency with a potential for high economic efficiency.

• Phytoremediation of Levonorgestrel in Aquatic Environment:

Study evaluated the absorption and degradation of levonorgestrel (LNG) by two hydrophytes, Cyperus alternifolius and Eichhornia crassipes. Phytoremediation of water polluted by LNG was found to be feasible; both CA and EC could accelerate the removal of LNG and shorten LNG exposure in the aquatic environment.