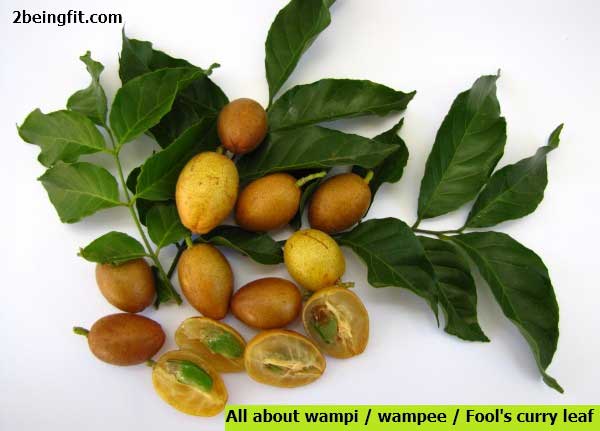 Wampi is a small tree about 7 meters high. Fruit is ivory yellow, rounded, about 2 centimeters in diameter, very slightly flattened at the base, somewhat rounded at the tip, and borne in bunches. Skin of the fruit is thin and soft, dotted with minute, raised, somewhat darker-colored spots, covered with short hairs, and marked by five, usually very inconspicuous, longitudinal lines which are lighter in color than the remainder of the fruit. Flesh is yellowish white, soft, juicy, somewhat acid in taste; cross-section shows a division into five segments by thin, white lines. Usually one to four of the segments contain a single, rather large, flattened green seed, attached near the apex of the fruit. It is cultivated in various parts of the world including India, China, Malaysia, Hong Kong, Singapore, Thailand, Sri Lanka, Cambodia, Laos, the Philippines, Florida and Hawaii. The taste of Wampees are mix of sour with a bit of sweetness. The texture is gelatinous like a grape, fleshy and juicy.

How to check for ripeness of wampi?

Leaves, and fruits.
Collect leaves from August to October (early gathering of the leaves affects fruiting.)
Dry under shade.

• For influenza, cold, malaria: use 15 to 30 gms dried leaves in decoction.

• In some countries, used for bronchitis, malaria, hepatitis, gastrointestinal inflammation.

• In Tonkin, the dried fruit is used in bronchitis.

Scientific proven evidence based health benefits and uses of wampi

Study finds that ß-santalol, the main constituent of the essential oils of leaves, flowers and sarcocarps has antinociceptive CNS effects and can be considered a neuroleptic.

Study showed the hepatoprotective actions of eight of nine compounds isolated from the leaves of C lansium, decreasing the hepatotoxicity of thioacetamide and acetaminophen in mice.

Study isolated from the seeds of CL, a homodimeric trypsin inhibitor which exhibited antifungal, anti-HIV reverse transcriptase and antiproliferative activities.

A study showed the superiority of the dichlormethane extract over the methanolic extract. Various activities showed were significant anti-hyperglycemic, hepatoprotective, antioxidant and anti-trichomonal activities. Its antidiabetic action was through stimulation of insulin release, mediated by imperatorin and chalepin.

Study isolated two new coumarins, clausenalansimin A and B, together with seven known coumarins from the twigs of C lansium. Some isolated showed cytotoxicity against human cancer cell lines (KB, MCF7, and NCI-Hi87).

Study investigated Bu-7. a flavonoid isolated from the leaves of C. lansium against rotenone-injury in PC12 cells. Results showed Bu-7 protects PC12 cells against rotenone injury, which may be attributed to MAP kinases cascade signaling pathway. Bu-7 may be a potential bioactive compound for the treatment of Parkinson’s disease.

How to Open or Cut wampi

After washing the wampi properly, consume like a lychee or longan fruit : peel the thin, pliable skin and slurp the insides. The one to five large greenish black seeds in the middle are not edible but easily removed. The mildly resinous skin is edible, for those who are impatient to get to the piquant flesh. In China, it’s common to smash the fruit using the knife blade before consumption, as it’s believed to release the flavors.

If possible, keep wampees on their branch until consumption. Wampees are quick to deteriorate once plucked, thus requiring instant storage once detached from the stem. Keep in the refrigerator between 2-4 Celsius in a perforated bag, where they will last for a week or two.

• In China, a much esteemed fruit, made into delicious preserves.

• Wampee has high anethole oil content, because of which it is used to make anisado—an anise wine common in Spain and a few South American countries. Asian countries ferment the fruit and make a champagne-like beverage.

• Use the juice in salad dressings and marinades. The juice will also make a quality glaze when caramelized.

• Its tangy flavor lends itself well to sorbets and popsicle recipes

• Wampis may be heated, boiled, grilled, simmered and baked as well.

• In China, the fruit is often simmered for preserves and dried, where the fruit’s shelf life is extended to a few years.