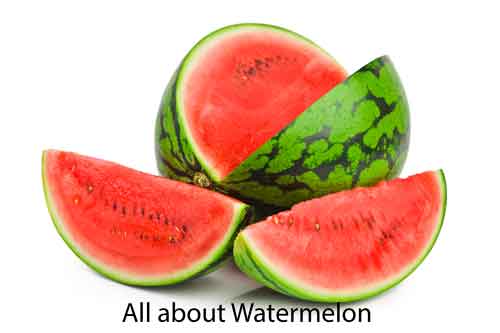 The scientific name of the water melon is Citrullus lanatus. It is also known as Tarbooz (in Hindi and Urdu), Tarbuj (in Manipuri), Kadu vrindavana (in Marathi), Eriputccha (in Telegu), Kallangadi balli (in Kannada), Tormuj (in Bengali), and Indrak (in Gujarati).

Fruit has a sweet, crisp, juicy and hydrating flavor. Its texture is mildly granular, but its roughly 90 percent water content makes for an overwhelmingly juicy fruit.

Watermelon seeds are crunchy, peppery and wholly edible. In fact, seeds contain excellent health benefits as it is rich in iron, potassium and other essential nutrients. A 100 gm of water melon has about 30 calories. It contain

How to check Ripeness of Watermelon

To check the watermelon is ripe, follow practical “thud” test: raisethe fruit to your ear, and give a vigorous tap. The best of watermelons have a thudding, hollow sound to indicate juicy, dense flesh. Always pair the “thud” tap with its heaviness—the best watermelons should feel heavy for their size. Heavy fruits signal water-rich flesh as opposed to unappealing stringy, desiccated innards.

Try  “stem test too.” Find the small circle near the end of the fruit where it’s been snipped from the vine. If it’s brownish in color, it’s ripe. If it’s green, consider passing on the fruit.

Ripe watermelons vary in exterior colors, but all should have a lustrous sheen. The fruit should be firm with no obvious, large indentations. A few scratches are acceptable, but bruises and pock marks are not.

Check the bottom of the fruit: Most watermelons have a discolored “ground spot,” which indicates where it rested in the soil before picking. The best fruits have a creamy yellow color—if it’s white, the fruit may have been cut prematurely from the vine.

According to a study,  the extracts of watermelon fruit peel has found useful in hypothyroidism. As it has thyroid stimulatory and antiperoxidase roles.

A study has shown that the leaf extracts of water melon has mosquito or insect repellent properties. It has insect growth regulatory activity which can be effective against malarial vector,and other insects.

A study states that watermelon is a natural and rich source of the non-essential amino acid citrulline. It is used in the nitric oxide system, with potential antioxidant and vasodilatory effects. Red flesh watermelons had slightly less citruline than yellow or orange flesh watermelons. Rind contains more citrulline than flesh.

Study showed watermelon fruit supplementation improves aortic blood pressure through a decrease in the amplitude of the reflected wave in individuals with prehypertension. Supplementation was well tolerated by all subjects, with no adverse effects reported.

Another study showed the leaves extract of watermelon has antimicrobial effects, which were very effective against bacteria and some fungal strains than other species including maximum inhibition against E. coli and Candida albicans.

A study indicate that watermelon seed extract may be of supportive treatment to combat diabetes complications and has anti-diabetic effect.

In another study, the watermelon seeds extract showed a significant increase in sperm population, motility and viability. It promote male fertility and using in infertile patients has beneficial effects.

Another study has proved that watermelon seeds helps to significantly increase testosterone.

According to a study, watermelon used as a safe radioprotection agent. Radioprotection could be due to the presence of antioxidants, particularly vitamin A, C, and lycopene.

A study has found that the peels of watermelon has analgesic activity. It can be effectively used in pain management without any adverse effects.

In a study, the consumption of watermelon juice increased plasma concentrationsof lycopene, a substance known to fight cancers, prevent macular degeneration and reduce the risk of cardiovascular disease.

Another study has shown that seeds of the watermelon can solved the problem of diarrhea that caused by Giardia intestinalis.

In a study, eating watermelon has anti-inflammatory activity against carrageenan induced edema and helps to protect the liver.

Whole watermelons kept in a warm summer kitchen can last up to a week.

Refrigerated watermelons can last  up to two to three weeks at temperatures no lower than 55 degrees Fahrenheit—any lower, and the shelf life reduces dramatically.

Place plastic wrap over refrigerated cut melon halves: This will keep the watermelon from drying out and prolong its shelf life.

Use skinned watermelon as the basis of a watermelon cake: use large cubes as the cake base, and adorn with kiwi slices, strawberries and melon skewers.

Make “watermelon pizza” by using the large ring as the “crust.” Use jam as the “sauce” and top with shredded coconut “cheese.”

Create watermelon popsicles by pureeing the juice and freezing. Add chunks of fresh fruit such as strawberries, blueberries and kiwi if desired.

Add chopped watermelon to salsa recipes, gently folding in the fruit at the end of the salsa preparation.

Combine watermelon juice with white wine to make a nice spritzer. Or, soak watermelon balls in vodka for an hour and serve chilled. Use mint (or even basil) to garnish.

Use watermelon spears in sandwiches: like cucumber, they add a burst of juiciness and a pinch of sweetness. Combine with tomato, mint, dark leafy greens, a hummus or pesto spread, and mock cheese.

Use the hollowed out shell of a large watermelon half to hold fruit punch.