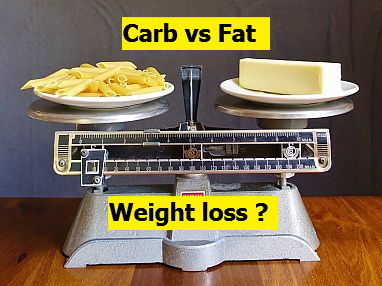 The choice of restricting fat intake or cutting carbohydrates from your daily diet for weight loss, is extremely difficult. It is important to determine, safe and effectiveness of weight loss program which recommend such dietary restriction. Here is the research study that can help us to find the right action or route to take on weight loss journey.

A research team led by Dr. Kevin Hall of NIH’s National Institute of Diabetes and Digestive and Kidney Diseases (NIDDK) conducted a study under carefully controlled conditions to determine the way the body responds to fat vs. carbohydrate restriction.

The team enrolled 10 men and 9 women with obesity. Participants averaged 35 years of age, did not have diabetes, and had an average body mass index (BMI) of 36 (30 or greater is considered obese).

The participants stayed in the metabolic clinical research unit on the NIH campus for 2 visits of about 2 weeks each. Having participants reside in a metabolic ward 24 hours/day allowed the researchers to carefully control the volunteers’ diet and meticulously monitor their energy expenditure.

For the first 5 days of each stay, the volunteers were given a balanced diet (50% carbohydrate, 35% fat, and 15% protein) of about 2,740 calories/day, which matched energy expenditure. Over the next 6 days, they received a diet with 30% fewer calories. The amount of protein remained the same. On one visit, the calorie decrease came solely by cutting carbohydrates. On the other visit, the calories were cut only from dietary fat. The diets were given in random order with 2-4 weeks between visits.

While in the metabolic ward, the participants walked on a treadmill for 60 minutes each day. Part of the time, they resided in a metabolic chamber to measure their energy expenditure and the relative balance of fat and carbohydrate they used to produce energy.

When participants consumed the reduced-fat diet, they had no observed changes in insulin production or fat burning. However, they lost about 89 grams per day of body fat—68% more than when they cut the same number of calories from carbohydrates.

The researchers note that given the short time frame of the study, it would be difficult to extrapolate the findings to a longer time frame. More research is needed to assess the long-term effects of fat and carbohydrate reduction in the body.

“Compared to the reduced-fat diet, the reduced-carbohydrate diet was particularly effective at lowering insulin secretion and increasing fat burning, resulting in significant body fat loss. But interestingly, study participants lost even more body fat during the fat-restricted diet, as it resulted in a greater imbalance between the fat eaten and fat burned,” Hall says. “ Research data tell us that when it comes to body fat loss, not all diet calories are exactly equal.”