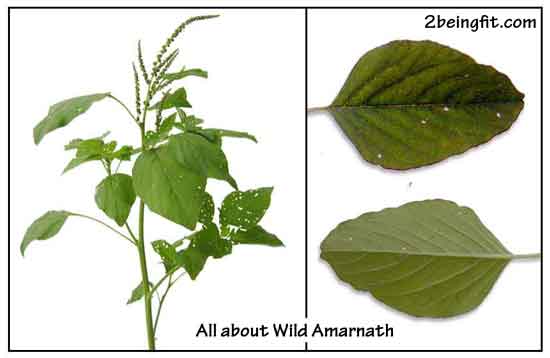 The scientific name of the Amarnath is Amaranthus viridis Linn. It is also known as Green amaranth, Slender amaranth and Wild amaranth. Other names include

Note: This herb differs from Amaranthus spinosus (Uray) in the absence of spines on the stems.

– A common roadside weed on lowlands at low and medium altitudes.

– Found in all warm countries.

– The powdered leaves yield tannin, some reducing sugar and resin, but no alkaloid.

– Analysis of leafy vegetable per 100gm:

– A. viridis was found to be an excellent source of protein; also contained considerable amounts of two fatty acids essential to humans (linoleic and α-linolenic) and a number of minerals including iron, magnesium, calcium, and zinc. (see study)

– Nutrient analysis of A. viridis yielded

· Harvest the root at any time of the year.

· The plant can be eaten as a vegetable.

– Leaves and seeds are edible.

– The tops are rich in calcium and iron. The plant is a good source of vitamins B and C.

– Study found it to be an excellent source of protein.

– The therapeutic properties and dosage are very nearly identical to Amaranthus spinosus.
(Uray)

– Poultice of leaves for inflammations, boils and abscesses.

– Use for acne and for skin cleansing.

– Infusion of plant has been used as a diuretic and galactagogue.

– Decoction of plant used for dysentery and inflammation.

– In Ayurveda, used for treatment of diabetes.

A ribosome-inactivating antiviral protein, amaranthin, was isolated from the leaves of Amaranthus viridis. Cytotoxicity of the amaranthin using in vitro translation inhibition assay was similar to that of pokeweed antiviral protein.

Study concludes that airborne A. viridis pollen is the most prevalent pollen during August to November in the outdoor environment of Saudi Arabia, with a clear pattern of midday to early evening maxima.

Study of a methanolic extract of whole plant of A. viridis showed significant dose dependent anthelmintic activity against Pheretima posthuma.

Study evaluated the antioxidant role of A. viridis against isoproterenol-induced oxidative dame in plasma and erythrocytes of rats. Results showed increase in antioxidant enzymes, reduced concentration of lipid peroxidation products.

Amaranthus pollen grains are known to be highly allergenic and a potential cause of respiratory allergic diseases. Study reveals A. viridis as a major component of outdoor airspora in Saudi Arabia constituting a major percentage of total pollen counts in various regions.

Study evaluated the preventive role of A. viridis on CRP, total protein, albumin, globulin, ceruloplasmin and glycoprotein in serum and heart of experimental induced myocardial infarction in male Wistar rats. Oral administration of A. viridis altered the metabolic derangements in ISO-induced MI in rats.

Study investigated the antihyperglycemic and hypolipidemic effects of methanolic extract of leaves of A. viridis in normal and STZ-induced diabetic rats. Results showed a statistically significant increase in body weight, decrease in blood glucose, total cholesterol, and serum triglycerides, with a significant increase in HDL. Histologically, there was less obvious focal pancreatic necrosis in the treated groups.

Study investigated the accumulation of chromium and its effects on other mineral elements in Amaranthus viridis to understand why AV grows well in soils heavily contaminated with A. viridis. Results showed A. viridis could not be considered a chromium hyperaccumulator. It accumulates Cr mainly in the stems and leaves, but could not absorb and accumulate large amounts of Cr. A. viridis accumulated Cr primarily in shots, and concentrated it in roots. Effect on mineral elements are briefly discussed.

Study showed Amaranthus viridis is an efficient hyperaccumulator and offers the best panacea to remediate vast oil spill lands especially in Niger Delta of Nigeria. Based on translocation values, A. viridis has the ability to absorb arsenic and cadmium.

In a study of different parts of leaf, stem and seed of A. viridis, a leaf extract showed highest HMG-CoA reductase inhibitory activity (71%), good antioxidant activity (DPPH, NO, and ferric ion radicals) and effective inhibition of hyaluronidase, lipoxygenase and xanthine oxidase enzymes. Results suggest A. viridis leaf extract is a source of potent antioxidant and anti-inflammatory agents and may modulate cholesterol metabolism by inhibition of HMG-Co! reductase.

An aqueous root extract of A. viridis was administered to female albino rats for 5 days from 11-15 days of pregnancy. Results showed an antifertility effect; the abortifacient activity was dose dependent, increasing with higher dose.